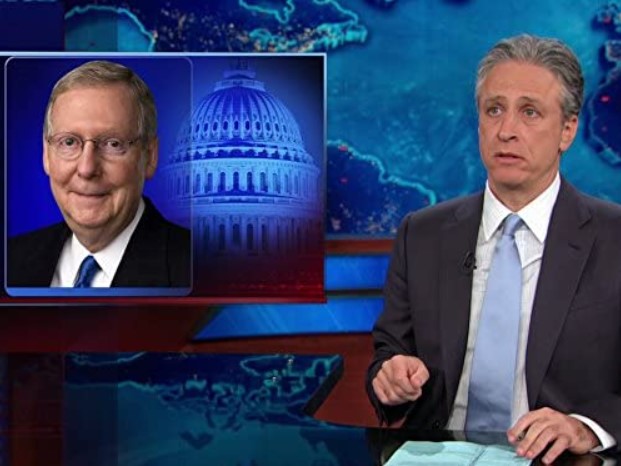 Jon Stewart hosts an episode of “The Daily Show.” Columnist Samuel Rahman believes Stewart will return to TV hosting a similar program in 2021.

October 27th marked an exciting day for the political late-night show industry. Apple TV+ announced former Daily Show host Jon Stewart would return to the small screen with a multiyear television deal with the streaming service. Apple TV+ added that the multiple season deal consists of hour-long episodes which will “explore topics that are currently part of the national conversation and his advocacy work.”

Before departing the program in 2015, Stewart’s Daily Show racked up a total of 20 Emmy wins over his 15-year tenure. His political satire on Comedy Central became so exceptionally popular that its brand of smart, incredibly funny and often poignantly introspective late-night comedy exported itself to a plethora of other leading television networks.

It is not hyperbolic to state Jon Stewart is an industry legend. It is hard to find a single individual that shaped late-night television more than Stewart over the past two decades. Daily Show alumni now rule late-night.

Steven Colbert of CBS’s The Late Show, John Oliver of HBO’s Last Week Tonight, Hasan Minhaj of Netflix’s Patriot Act, Samantha Bee of TBS’s Full Frontal and of course Trevor Noah, the current Daily Show host, continue to be some of the faces of the political comedy genre.

Steve Carell and Ed Helms, both widely known for their roles on The Office, also began as Daily Show correspondents. Select anyone from the dozen or so former or current other correspondents to find a treasure-trove of accomplishments and critically acclaimed work.

After his exit stage left from the show and industry he created then perfected, he dedicated his time to advocacy work in helping push legislatures to permanently reauthorize the September 11th Victim Compensation Fund.

His chosen area of advocacy was by no means an easy endeavor to accomplish. He was met by nothing less than utter apathy from some Congresspersons. In a speech delivered to a House committee, his speech’s opening sentences put the grim reality best.

“I can’t help but think what an incredible metaphor this room is for the entire process that getting health care and benefits for 9/11 first responders has come to.” Stewart continued. “Behind me, a filled room of 9/11 first responders and in front of me, a nearly empty Congress. Sick and dying, they brought themselves down here to speak to no one. It’s shameful.”

For those who have yet to watch his full address to the Congressional committee or do not know who Jon Stewart is as an entertainer, the video is a worthwhile watch that will communicate exactly the type of person he is.

Stewart’s sincerity is what set him apart. Yes, he spent a great deal of his time calling Fox News hosts and certain politicians as incompetent, malicious and everywhere in between while weaving in the occasion adolescent fart-joke-style punchline. He also took the time to reflectively pause and address larger issues.

In 2015, just before he left the Daily Show, Stewart covered the shooting at the Emanuel African Methodist Episcopal Church in Charleston, South Carolina. In the five minute segment, the host admits that he reluctantly lacks jokes for the show, in light of the recent event.

What made Stewart special was the reflective poignancy he brought to similar segments. He urged audiences to stare into the gaping wounds of the past and acknowledge them for what they are.

With all that said, Apple TV+ alleges sometime in early 2021 that the streaming platform will deliver Jon Stewart back to the audiences that miss him so. They allege Stewart will return with his hour-long, single-issue-per-episode program — multiple seasons, in fact. The comedic and poignant commentary, too few other than Stewart can produce, will soon be back on the air.

Audiences heard the same story in 2015, though. Stewart struck a four-year production deal with HBO for an animated series that would comment on current topics in the national discourse. HBO officially ended its pursuit of the project in 2017 after delays and various difficulties. Hopefully, this show with Apple TV+ does not fall into the waste bin alongside the HBO endeavor.

The country needs Jon Stewart — his ability to create laughter, his insight, his dedication to truth and responsibility and frankly, his moral leadership. Not to say that Stewart, a satirist and comedian, is the right person to convey moral leadership. Right now though, he is the person needed to fill the void left by public officials that lack the courage or ability to act as such.