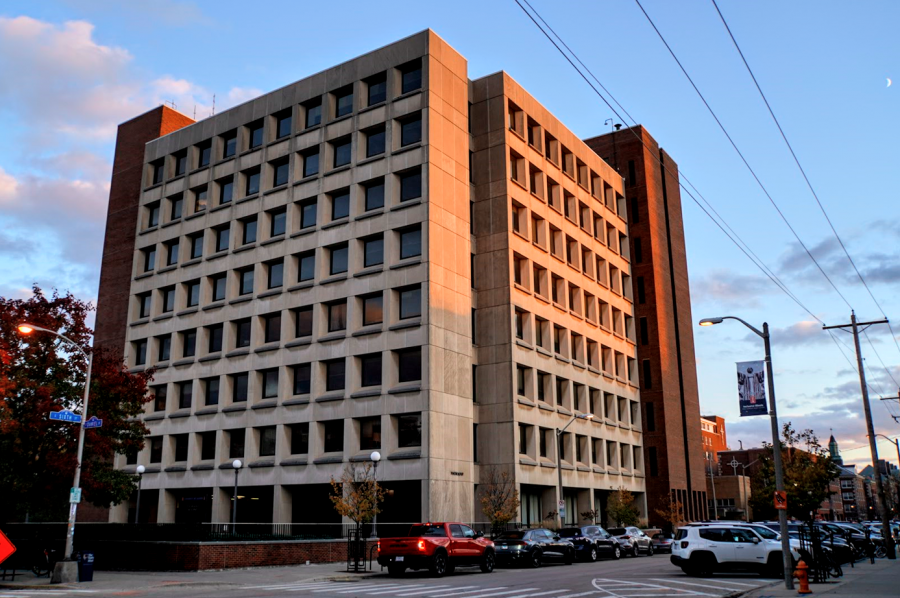 The exterior of the Psychology Building on Nov. 1, 2019 is pictured above. Columnist Ellen argues building design should be aesthetically pleasing.

It’s been generally agreed upon that the World’s first skyscraper was built in Chicago in 1884, just 141 miles north of Urbana. Nowadays, if you were to look at that building, you would be shocked to see it called a skyscraper at all; it barely measured 137 feet.
We are so used to super skyscrapers towering hundreds of feet above that a building less than 200 feet seems almost commonplace. However, whatever modern architecture has gained in height, it has lost in beauty.

To the layman, it seems like the profession of architecture has given up creating beautiful buildings that appeal to the eye in favor of copy and pasting glass monstrosities that litter the skylines of almost every major city.

It is often said beauty is in the eye of the beholder, and I’m sure some contrarians in the world find these buildings more appealing than the architecture of the past. There are also people out there who consider New York style pizza better than Chicago’s deep dish. Just because these people exist, though, doesn’t mean we have to listen to them.

As far as the aesthetic relativists go, architect Mark Hewitt puts it in a nutshell: “Contrary to what social scientists believed in the mid-20th century, humans in all cultures have a shared sense of what is beautiful that has been nurtured by experience”. Humans notice when something is cheaply made or when corners are being cut in order to save a dollar; often, this method seems to be used with buildings today. Just walk down Green street and look up at any of the newly constructed high rises to notice this trend.

To save money, architects and urban planners should not look at what can be made the cheapest or the fastest; they should look to what lasts. There’s a reason why the cathedrals built hundreds of years ago are still visited by people across the globe:  beauty endures. People don’t want to destroy beauty, they want to live surrounded by it.

Not only do these glass skyscrapers tend to be aesthetically displeasing, they are also detrimental to the environment. The energy used to cool these giant glass buildings has doubled in recent years and is on track to double again if something isn’t done.

One suggestion to solve this issue made by Diana Ürge-Vorsatz, professor of environmental science and IPCC member, is to “ban all glass skyscrapers.” While an all-out ban is a step too far, it is a step in the right direction in the conversation about architecture and the role it plays in our cultural landscape.

But the reason for creating beautiful cities and buildings isn’t just because cheaply built structures are an eyesore. Studies have shown that buildings and cities can affect the mood and well being of a city’s inhabitants. In fact, specialized cells in the hippocampal region of our brains are specifically attuned to the geometry and arrangement of the spaces we inhabit.

Colin Ellard, a researcher at the University of Waterloo in Canada, specializes in the psychological impact of design. Ellard has found consistently in his research that people are strongly affected by building facades. If the façade is intricate, it affects people in a much more positive way versus when it is plain and unadorned.

In one of Ellard’s experiments, he found when he walked a group of subjects past the long, smoked-glass frontage of a Whole Foods store in Lower Manhattan, their arousal and mood states took a dive, according to the readings they got from their wristbands and on-the-spot emotion surveys. They also began to walk faster as if to hurry out of the dead zone. Their moods picked up considerably when they reached a stretch of restaurants and stores, where they began to feel much more lively and engaged.

During a time when over 47 million Americans in the U.S. are living with a mental health condition, this problem becomes especially worrying for people living in cities. Studies have shown growing up in a city doubles the chances of someone developing schizophrenia and increases the risk for other mental disorders such as depression and chronic anxiety.

When architects and urban planners design buildings, they must take into account not just the bottom line, but also the impact their work will have on the lives of those living in and around the spaces they create. Winston Churchill said it quite aptly: “We shape our buildings; thereafter they shape us.”

Grant is a junior in LAS.
[email protected]