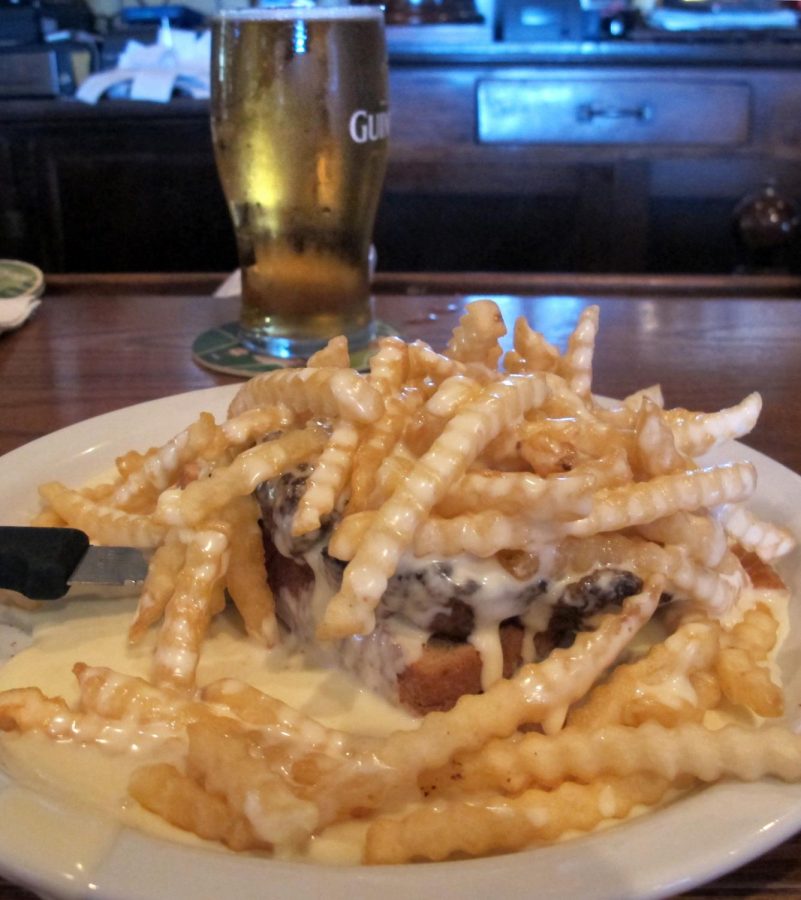 A horseshoe sandwich is pictured above. Columnist Noah encourages the spread of the appreciation for the local dish.

Philadelphia is known for its cheesesteak sandwiches; Chicago for its deep dish pizza; Denver for its omelettes and New York City for its hot dogs. Though it’s not quite known throughout the word, Central Illinois is famous for their own specialty food: the horseshoe sandwich.

It’s a local legend throughout the region, and whether one lives there or not, everyone should know what a horseshoe is.

Though its origin story is shaky, many believe Springfield’s Leland Hotel’s head chef Joe Schweska invented the now famous creation in the late 1920s, consisting of a slice of bread, a kind of meat representing the horseshoe, French fries for nails and hot cheese sauce for the glue. It’s become a staple meal in Illinois’s capital city, but the craze didn’t halt there.

Nowadays, anyone can find a horseshoe on almost any Central Illinois restaurant menu. From experience, many are great in their own right, but none are as delicious as those found at Springfield’s D’Arcy’s Pint. It’s hard telling if the Irish Pub made the horseshoe famous or vice versa, but if anyone makes a visit to President Lincoln’s historic home, D’Arcy’s is a must stop.

Growing up in Central Illinois near Springfield, it was always great to have the luxury of choosing a horseshoe on any menu and knowing the area has its own specialty food. The disappointing part of it is always telling someone from outside the area the excellence of a horseshoe and they have no idea what I’m talking about.

Many of my friends are from the Chicagoland area, and when I tell them about horseshoes, they think I’ve gone crazy. But it’s real. I keep telling them they have to try it out for themselves.

It’s great to have our unique food choice, but it’s sad that many people don’t know of its existence. Everyone seems to know what a Philly Cheesesteak and a Denver omelette is; both of those meals are popular nationwide. So why isn’t a horseshoe?

At the end of the day, whether you know about Central Illinois’s best hidden gem or are just learning about it for the first time now, everyone should know what it is. It’s our own little slice of Americana and maybe — just maybe — it’ll tempt you to visit Central Illinois to try one for yourself.