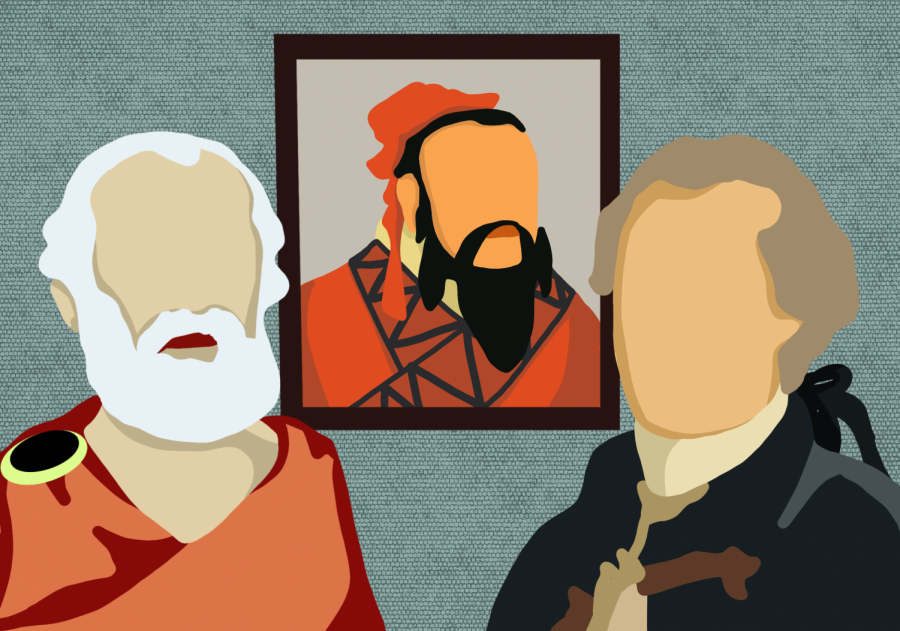 When thinking about philosophy, the minds of Plato or Emmanuel Kant come to mind. Karl Marx may come to the minds of the anti-capitalists as well. These are considered “real” philosophers. What is it that these people have in common? They are all European men.

The core requirements for any philosophy curriculum consists of studying Greek, Roman and Enlightenment Era philosophers. In higher-level courses within the curriculum, from metaphysics to epistemology, the topic is centered around European schools of thought.

A course focusing on the ideas of non-western philosophers is nowhere to be found at Illinois. Whether or not it be due to the lack of knowledgeable faculty at the University, it is undeniably a reflection of society’s delegitimization of non-western education.

In the typical philosophy curriculum at U.S. colleges and universities, why do Ancient Philosophy courses focus only on the Greeks and Romans? All the while, major philosophies were also taking root on the other side of the world.

There exists not a single course dedicated to studying the great minds of Confucius, Buddha or Sor Juana Ines de la Cruz at the University of Illinois. Why is feminism seen as a social movement but not also a philosophical concept? Why is dharma seen as a hip and trendy spirituality in the West, and not also as the groundbreaking school of thought that it is?

How did this hyper-European centric body of study come to be and what does it mean for the future of our education? Why has philosophy education come to be centered around Western schools of thought?

Well, when looking at the historical development of philosophy, it becomes evident that European-centered philosophy education did not occur by accident. This is a carefully crafted academic body of study meant to uphold the ideas of white supremacy that have defined the western world.

Though Buddhism is also a religion, the delegitimization of Buddhism as a philosophical body of study cannot be ignored. As previously mentioned, the concepts of Buddhist teachings such as dharma and karma are viewed in the West as hip and trendy.

As the Buddha’s image is plastered on items to be sold to the masses for the sake of an “aesthetic,” Buddhist philosophy is stripped of its religious significance and academic sophistication — it is whittled down to a mere commodity for consumption by others.

The main argument in the overarching theme of this essay is that as the Era of Enlightenment took shape, philosophy was used to justify and solidify European superiority in an ever-expanding world.

This led to the expansion of westernized education as Europeans colonized the globe. Philosophers used their names and reputation to preach discriminatory ideas such as scientific racism which resulted in racist education in the West.

We are taught “modern” medicine that was created in the West, literary “classics” and genres that were written almost exclusively by those of European descent, and philosophies by Europeans.

The implications of a Eurocentric education is dangerous. Not only does the delegitimization hold, but it further spreads the ideals of white supremacy; this is also inherently misogynistic.

We learn the ideas of early modern philosophers in the context of western imperialism, most notably during the Scramble for Africa. The belief of scientific racism also comes to be. We’re looking at you, John Locke.

What are we as students and as an overall society supposed to do? How can we change the ideas that have taken shape for millennia? It begins with education, for how can we become global citizens if we do not know what the rest of the world has to offer?

We must begin offering non-Western philosophy courses here at the University of Illinois. Not only must they be offered, but they need to be more than optional. The curriculum needs to be restructured in order to incorporate these truly modern, global philosophers.

The white men whose philosophy is rooted in racism, misogyny and insurrection is lauded for its groundbreaking thoughts — yet the people truly expanding this body of study are left in the shadows, merely an afterthought in the form of course electives — providing such a course is even offered. Let’s make use of the “Power of I” by pioneering a truly globalized, world-class education.

Andrea is a junior is LAS.