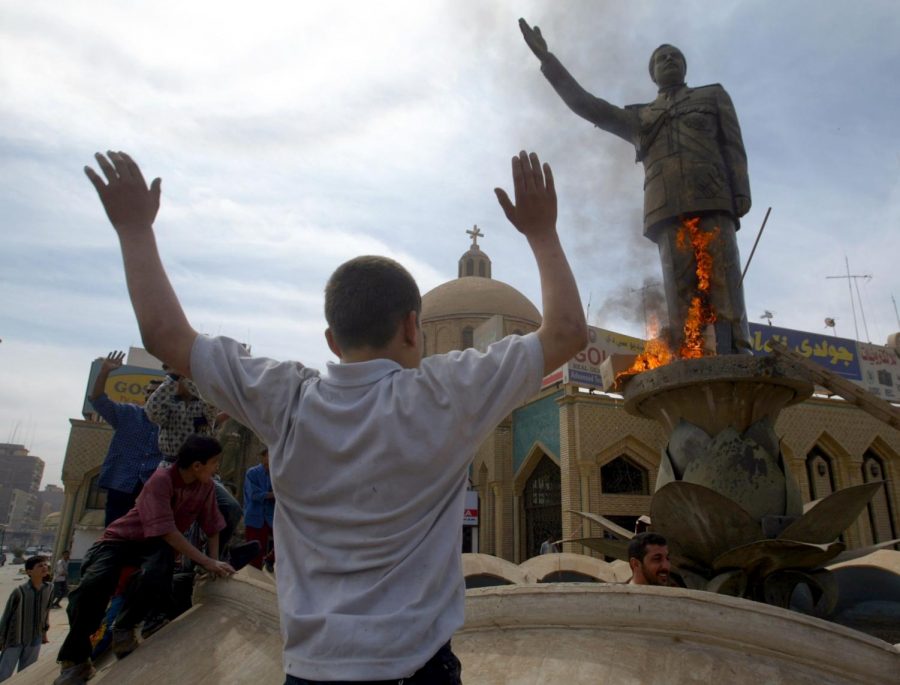 Iraqis gather and cheer as they burn a statue of Iraqi President Saddam Hussein in downtown Baghdad, Iraq, on April 12, 2003. Columnist Nathaniel believes the United States’ efforts in the Middle East have accomplished nothing.

In Iraq alone, U.S. taxpayers have covered over $2 trillion for the extensive military operation merely resulting in one toppled regime and an unattainable conclusion for all involved parties.

Wistfully, this uncomfortable American predicament is not exotic as precedent reveals the U.S.’s international debacles can at first elicit strategic deficiencies, yet gradually mature into tolerable outcomes: case in point, Vietnam.

Both wars in Iraq and Vietnam share the characteristic of America frantically forcing itself upon a minor, geographically paramount nation.

Following ill-advised domino theory — if communism consumes one country, its neighbors will capitulate as well — Vietnam appeared to America as decisive for preventing communism — a goal, notoriously, never actualized.

In 2003, those within President George W. Bush’s circle justified Iraqi intervention as “democratic domino theory,” suggesting that if Iraq became a democracy, adjoined Arab states would also promptly be democratized. Seventeen years later, any promise of liberalization has dissipated in the Middle East.

In a 2008 op-ed for Brookings, Ron Nessen, former press secretary to President Gerald Ford stressed the connection between Vietnam and Iraq asserting, “the United States knew very little about either Vietnam or Iraq before it became mired in conflict.”

However, Nessen strikingly notes that, through a bitter American withdrawal and catastrophic, inhumane massacre under Ho Chi Minh, modern Vietnam has materialized with profound “economic liberalization” followed by “political liberalization.”

Today, the U.S. has engaged fervently and sporadically in Iraq the last 18 years; in contrast, America’s involvement in Vietnam survived around 10 years.

The reasons for America’s enduring participation range from nurturing adolescent democracy in Iraq, countering an aggressive Iran using Iraq and tempering any return of potential terrorist threats. Despite these practical explanations for the extended stay, none address the fundamental fact: The U.S.’s presence only escalates this rationale and cannot mitigate the menaces.

Iraq and Vietnam’s plots follow the mantra “second verse, same as the first.” In addition, history illuminates that a ceaseless residency in the Middle East will not elucidate any international welfare, rather, a one-and-done departure — however daunting — is the optimal choice for both the occupant and occupied.

Although the premise of a clear disengagement in the Middle East appears auspicious, the regional quandary lingers with America’s current antagonist: Iran.

In soliciting a strategy to buttress any Iranian intimidation, America’s engagement in the Middle East has led to the present plight of America befriending authoritarian deceivers and manipulators — namely Saudi Arabia.

In a twisted turn of events, the U.S.’s militaristic admission into Iraq has culminated in an addiction where America relies on autocrats for their international interests.

If the U.S.’s initial intent was promoting democratic principles and ideals, surely that fantasy has now expired as peculiar interests overshadow any perception of “democratic domino theory.”

There must be an imperative recognition that the U.S.’s purported role in invading Iraq to deliver “peace to the Middle East” has collapsed.

Since Vietnam, the U.S. has frequently floundered in distributing any semblance of diplomatic opulence to embattled regions of the world. Moreover, this ongoing, scrambled foreign policy mirrors its original disarray formerly exhibited by various “domino” theories targeting developing nations.

Likewise, the U.S. today struggles to fasten an ever-escalating region in which it cannot admit it is the agitator in question.

In the notorious Mission Accomplished speech, President Bush wholeheartedly declared, “In the battle of Iraq, the United States and our allies have prevailed.” Distinguishing any perception of finality, Bush soon bolstered — presiding in front of the renowned “Mission Accomplished” banner — “The war on terror is not over, yet it is not endless. We do not know the day of final victory, but we have seen the turning of the tide.”

Contrastingly, President Ford — speaking at Tulane University on April 23, 1975, a week before the U.S. exited Vietnam — argued, “America can regain the sense of pride that existed before Vietnam. But it cannot be achieved by refighting a war that is finished as far as America is concerned.”

Standing in New Orleans, Ford drew the comparison of Vietnam to the War of 1812 and its Battle of New Orleans, relating, “In New Orleans, a great battle was fought after a war was over. In New Orleans tonight, we can begin a great national reconciliation.”

The irony of Bush’s “Mission Accomplished” still pervades American intervention in the Middle East. Despite the “wars” in the Middle East having moderated, the U.S.’s excessive involvement in the region continually limits any possibility for a “great national reconciliation” required post-Iraq.

History defies those who dismay a “disruptive American withdrawal” as erroneous. The U.S. certainly has every right to safeguard its discerned interests, yet the profound mission for any contemporary American undertaking should be a “great national reconciliation,” not a redundant, international intensification.