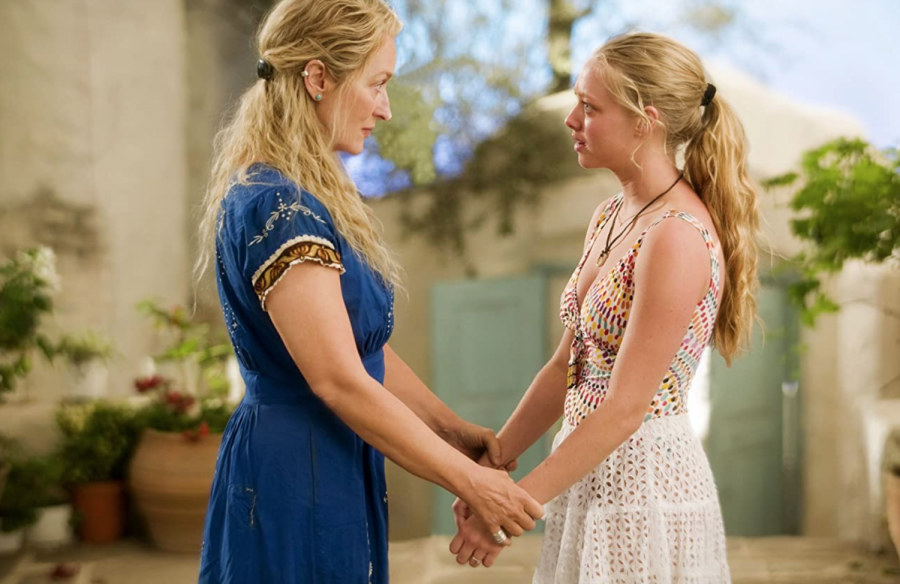 Meryl Streep and Amanda Seyfried star in “Mamma Mia!” which was released on July 18, 2008. Columnist Nathaniel Langley argues that the film exudes a mixture of narcissism and good tunes.

The 2009 jukebox musical movie, “Mamma Mia!,” is a groundless, delusional film, fortunately, constructed around the ethereal music of ABBA.

Despite ABBA’s melodies shielding the film of complete delusion, the plot of “Mamma Mia!” is solely comparable to the surreal creations from the likes of Salvador Dali and Pablo Picasso — excluding the illustrious depth, inventive artists and the addition of erratic dancing.

Legitimately, the music surrounding the film is exceptional and catchy. However, the words that fill those silent, perilous moments between songs are cumbersome to the audience’s ears passionately pursuing the subsequent ABBA song.

Although the musical movie radiates charm, the lacking union of a decent plot overthrows any potential for “Mamma Mia!” to be a considerable comparison to the likes of “La La Land,” “Chicago” or even the exalted “The Muppet Movie.”

Lloyd’s perplexed creation understands itself as an ode to the entertaining catalog of ABBA, yet any effort to compose a bearable story is ditched in place of devoting all energy to singularly epitomizing ABBA. Likewise, there is an observable pain within the story of the unfortunate islanders trapped in this jukebox-limbo fitted for Donna’s prudence.

Some counter, “The plot does not matter, let the music tell the story and enjoy it.” That would be an appropriate rebuttal, but the audience is never given a plot to even speak of — the conclusive reply to the aforementioned counter is straightforward: “Specifically name one character from the film, not just Meryl Streep’s Donna.”

For those unfamiliar with the film, “Mamma Mia!” follows a wondrous Greek island, purportedly the likes of which Narcissus may crave.

Centered, supposedly on Donna’s daughter Sophie, who invites three paternal contestants — unbeknownst to Donna — where shenanigans ensue in preparation for Sophie’s climactic wedding. However, spoiler alert, there is no big day for Sophie, only a spontaneous celebration for Donna.

Correspondingly, YouTuber Jenny Nicholson characterized Donna as being in the same vein as Joker from 2019’s “Joker,” with Gotham being replaced for Meryl Streep’s fictional island of Kalokairi.

Where Joker torments Gotham as his plaything, Donna from “Mamma Mia!” captures Kalokairi from all semblance of reality and snatches the islanders into her egotistical pastime.

Early on, the narrative promises it will follow Sophie discovering which of Donna’s three former suitors is her father. Nonetheless, this focus shifts promptly away from the film’s storyline when Donna rants to her reliant friends — Tanya and Rosie — about Sophie’s extravagant wedding and fiance, claiming “they will never leave.”

Naturally concerned, Christine and Julie inquire if Donna wishes Sophie and her future husband to retreat from the island, Donna steadfastly responds with a maniacal laugh, “I want what’s best for her… Course not.”

The Mayo Clinic defines a narcissistic personality disorder as “a mental condition in which people have an inflated sense of their own importance, a deep need for excessive attention and admiration, troubled relationships, and a lack of empathy for others.”

Donna exemplifies this characterization not only in notably possessing “troubled relationships” — the film’s central dilemma is uncovering which three men are Sophie’s father — but as well as “a deep need for excessive attention and admiration.”

Donna’s symbolic placement at the yacht’s bow furthermore divulges Donna’s selfish motivations of placing herself at “life’s bow.” In a provocative fashion similar to Hamlet’s monologue revealing, “The play’s the thing / Wherein I’ll catch the conscience of the king,” this bow incident is an unapologetic declaration of Donna’s vanity.

Donna’s — i.e., the queen of Kalokairi — conscience is apprehended continuously throughout the picture, and its core is crowded with narcissistic tendencies.

Besides the self-centered illusion with “Money, Money Money,” Donna additionally performs with Christine and Julie as “Donna and the Dynamos” and — with the film’s conclusion — supplants Sophie’s wedding with her previous paramour Sam.

Interrupting Sophie’s nuptials, Donna’s self-absorbed arc finalizes in amidst her daughter’s wedding to unapologetically bring attention to herself; Sophie’s assurances of a wedding annihilated.

If not for the stimulating, atmospheric tunes from ABBA, “Mamma Mia!” is more a nightmare than a daydream of sending off one’s daughter to marriage.

Granting that the soundtrack is stellar, the plot is ironically summarized in Donna presenting “The Winner Takes It All.” The sole victor in the game of “Mamma Mia!” is Donna’s narcissistic personality dominating Kalokairi’s ill-fated inhabitants.

Correction: A previous version of the column stated that Donna communicated with her friends Christine and Julie, the actresses’ names, and not the characters they played: Tanya and Rosie. The Daily Illini regrets this error.