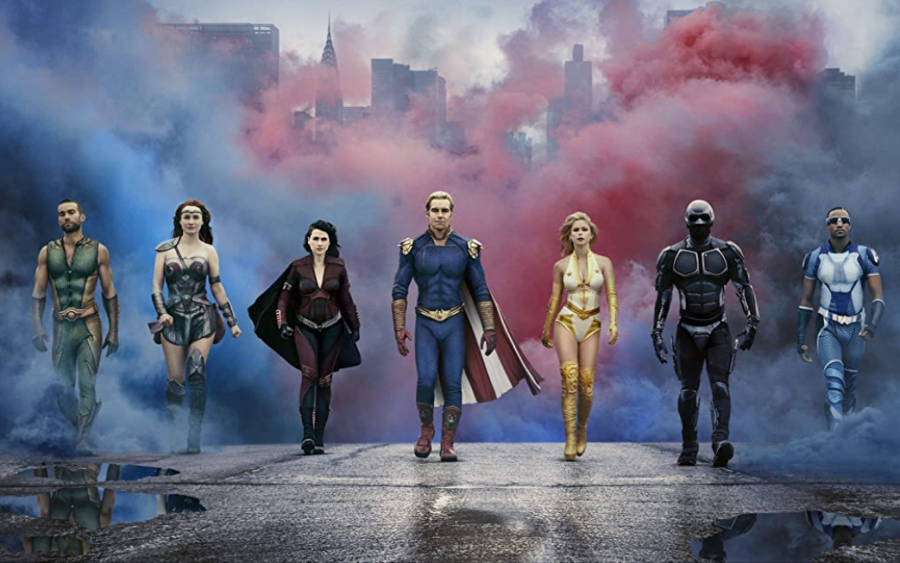 Dominique McElligott, Antony Starr, Jessie T. Usher, Chase Crawford, Aya Cash and Erin Moriatry star in “The Boys.” Columnist Matthew Krauter argues that the show highlights the dark sides of superheroes in a way that the Marvel franchise has not.

Despite a year of vacant movie theaters, the cultural craze over Marvel’s superhero film franchise has presently persisted in streaming services through shows like “WandaVision” and “Falcon and the Winter Soldier.”
The generation that grew up with Iron Man on the big screen loves watching their heroes in action. That is, until a speedy hero runs through their girlfriend, killing them instantly.
Amazon’s “The Boys” is a darker flavor of the superhero genre. The Marvel movies are loveable for their family-friendly tones and endearing characters, but get a bit repetitive with uninspired villains facing the uncompromising good guys. Accordingly, Joaquin Phoenix’s “Joker” is the darkest supervillain movie in recent memory, finally meeting the audience’s expectations for a villain.
The superheroes in “The Boys” have the same look and charisma as the mainstream characters, but as soon as they walk away from the TV cameras, their smiles fade as they sexually assault women or shoot up illegal drugs.
Their hero meetings aren’t about crime-fighting; they focus their efforts on stopping bootleg sales of their merchandise.
Superheroes in the show aren’t focused on saving the world or stopping crime. Their real business is a multi-billion dollar entertainment industry like in the real world. Their company, Vaught, only sends them to fight crime when they’re flanked with cameras for social media.
The “supes” are a roaring criticism of modern celebrity culture. Their public lives are a facade, designed to sell a perfect and unattainable ideal. Their wealth and status are far more important to them than their fans or their charitable initiatives. Their lives of substance and sexual abuse are all too reminiscent of the likes of Lance Armstrong and Harvey Weinstein.
Under a legal system like the United States,’ superheroes could never be permitted to exist. Vigilantes are rightly illegal because they circumvent the law enforcement infrastructure and systems of due process we trust in. The government has the sole claim to these roles and is accountable for its failures.
Something often neglected in movies is the collateral damage superheroes cause. The Avengers were reeled in by the UN with the Sokovia Accords after their encounter with Ultron, but on a day-by-day basis, an exorbitant amount of damage and lives would be lost by their destructive antics. It’s not something fun to think about amidst the lightheartedness of the movies, but it’s real.
Homelander, a cross between Captain America and Superman, is the most terrifying superhero in the show.
He nonchalantly murders bank robbers moments before posing for a selfie with teens. His word-for-word perversion of George Bush’s 9/11 bullhorn speech to politicize a plane crash for his company’s gain is gut-wrenching to watch.
Homelander embodies the mistake people make when they assume superheroes, or real celebrities, have super-natures. The real villains aren’t always obvious. The heroes in “The Boys” capture a dark side of human nature, but one that ordinary people can overcome with enough courage.
These themes, and the ridiculous use of superpowers, make “The Boys” a must-watch.

Matthew is a junior in LAS.
[email protected]