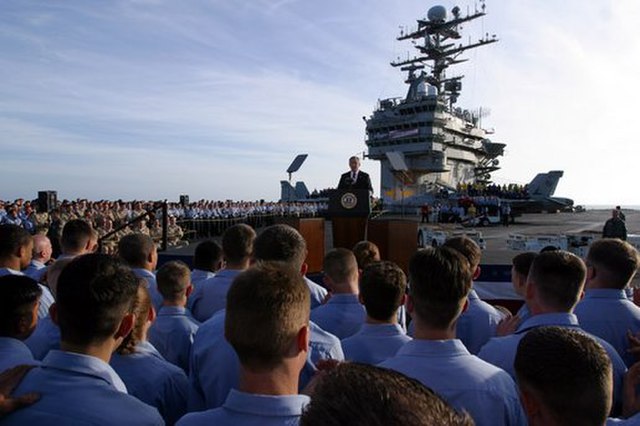 Former President George W. Bush addresses sailors and the nation from the flight deck of the USS Abraham Lincoln off the coast of San Diego, California May 1, 2003. Columnist Nathaniel Langley argues that Bush’s mistakes highly outweigh his administration’s accomplishments.

America has set adrift since its former captain abandoned ship. Its former skipper, a man who, while in office, adversely affected every aspect of American life, somehow today enjoys fanatical followings.

The man: former President George W. Bush. The ship for which he has forsaken to its tumultuous present: the United States of America.

Failed foreign and domestic policies have shaped this nation into its current predicament: polarized, impoverished and frail. Erroneously, some blame a different recent president for all complications, and as much damage as the man inflicted onto society, all faults scour beneath the blatant misconducts conducted beneath Bush.

Although many compare the two leaders as equally appalling, their similarities end when denoting Trump’s words were rather scandalous — yet rarely translating to policy —, while Bush’s emboldened actions unquestionably linger to this day.

No worse policy handling presently prevails than the “Bush Doctrine.” In the fall of 2002, the Carnegie Endowment for International Peace described this strategy as holding “that America should not wait to be attacked, but move proactively to disrupt and defeat terrorists and tyrants.”

On the surface, the doctrine appears sufficient for counter-terrorism purposes. Yet, this dogma persists today in America’s forever wars — with President Biden only recently announcing that U.S. forces will exit the futile, Afghan combat zone 20 years following the 9/11 attacks.

Chiefly, the Bush presidency is best illustrated with the hypocrisy of Bush’s “Mission Accomplished” banner presiding over the President’s address to armed forces — with this specific “mission” enduring across two generations and counting. Within his May 1, 2003, speech, Bush claimed, “The war on terror is not over, yet it is not endless. We do not know the day of final victory, but we have seen the turning of the tide.”

In a report by Brown University’s Cost of War, over 500,000 lives have perished since the U.S.’s initial involvement in the Middle East — around 250,000 of those killed being civilians.

Correspondingly, over 7,000 U.S. soldiers have died in combat as well as at least 52,000 armed forces being wounded in action.

In addition to statistics not bestowing justice to the lives, families and friends of those lost, the responsibility for these lives taken rests on the shoulders of the commander in chief who originally led them to war: President George W. Bush.

George Bush, likewise, is a man of faith. However, his fervent faith repeatedly enveloped his judgment and impeded the nation into decades of obscured conflicts and crises.

Bruce Bartlett — a former advisor to President Ronald Reagan, and treasury official with President George H. W. Bush — proclaimed in a 2004 piece for “The New York Times Magazine” that Bush possessed a “weird, Messianic idea of what he thinks God has told him to do.”

Bartlett, subsequently, defined Bush’s faith as fundamentalist as those he was countering in the Middle East: “He truly believes he’s on a mission from God.”

The only “Mission Accomplished” within the Bush presidency is America flailing at the 21st century’s entrance. Consequently, this former administration deserves no condolence nor nostalgia: a failed leader warrants no pity.

The Bush preeminent strike into the American soul, principally, dawns the premier flaws of the Trump administration.

The Bush blemishes prevail in the American psyche. As such, the legacy of this administration and its executive merit not only strict scrutiny but as well as accountability.

History will define a pre- and post-George W. Bush America. Furthermore, only now is the nation recovering from the shortcomings and tribulations of the past presidency: A return of competent government appears over the horizon.

The mission for American ascendancy is prolonged and daunting, but first and foremost, it requires thorough command. Even more so, the American memory must not wipe the experiences under the meager solely because “worse” management steps in.

George W. Bush cannot receive a public pardon. The imperfections immensely outweigh any achievements his administration yielded. Yet, with refreshed accountability toward the 21st century’s flunkee, asserting liability towards American leadership persists as the hope for a mission lacking accomplishments.