Opinion | Do not forget the Palestinian National Initiative 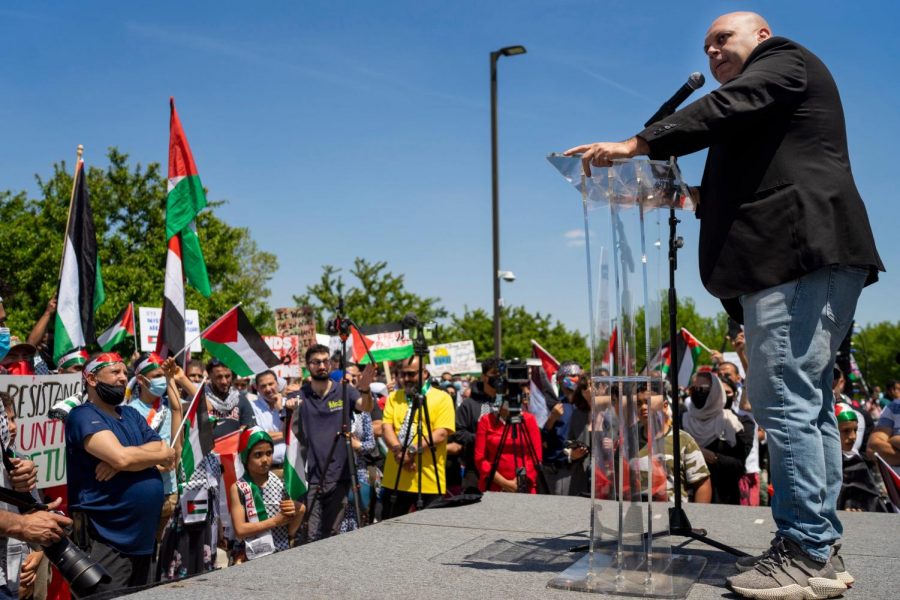 In Dearborn, Amer Zahr gives a speech to protesters during a rally and march in support of Palestine on May 18, 2021. Columnist Eddie Ryan shares his ideas on the Israeli/Palestinian conflict.

After two demoralizing weeks of devastation in Gaza and Israel, with blame to be apportioned and prescription afforded, two oft-neglected elements of this perennial issue merit attention.

The first is political euphemism, proffered in spades by the State Department and the Washington Post. One notes that at the outset of the recent conflagration, National Security Advisor Jake Sullivan expressed “serious concern” in response to clashes in Jerusalem arising from the Sheikh Jarrah evictions and the Al-Aqsa mosque raid.

Then, in response to dueling rocket barrages of which these two Israeli aggressions were proximate causes, there came more base, coded language. This includes Secretary of State Tony Blinken’s statement that “particularly when we see children caught in the crossfire, losing their lives, that has a powerful impact.”

The term “concern” is, of course, a formality nearly devoid of diplomatic meaning: a boilerplate perfectly calibrated to convey the minimum attention demanded by international standards of decency while remaining noncommittal. One shouldn’t have to explicate the contemptible inadequacy of ascribing just “a powerful impact” to the deaths of dozens of Palestinian children by missile attack.

Not to be outdone, the Post joined in, laughably deeming Biden’s belated call for Netanyahu and Hamas to protect civilians a “subtle rebuke of the Israeli government.”

Careful readers will note that the Post also misused the term “brutalizing” in asserting that such was done by the Israeli police to Palestinian civilians. In paradigmatic cases of oppression such as this one, the oppressor grows callous and inhumane through their acts of abuse and is thus “brutalized”; the victims by no means devolve in this way but rather happen to bear the odious brunt of the devolution.

All this to say that a look at the language can crystallize submerged political realities. One here refers to the U.S.’s unwillingness to contribute meaningfully to progress in Palestine, let alone to admit its complicity in the maintenance of Israel’s cruel apartheid regime.

The familiar narrative thus persists: The U.S. provides Israel with outsized funding for its weapons and illegal settlements; shields it from sanctions at the United Nations; and, most recently, has facilitated regional agreements and an embassy relocation which ignore and hence exacerbate the Palestinian plight.

In just the past two weeks, the U.S. blocked a U.N. ceasefire resolution four times and authorized a new arms deal to Israel.

This sordid conduct is constituent to long-running U.S. policy which seems only recently to have met any criticism from Democrats – a shift owing to the influence of Black Lives Matter and additional progressives in Congress.

Yet while this is encouraging, and while one hastens to argue that not another dollar of U.S. taxpayer money should go toward Israel’s illegal occupations in the West Bank and East Jerusalem, Biden does not now and never did appear amenable. As predicted, this “divot in the Middle East” drew him only begrudgingly from his desired “pivot to Asia.”

For now, consideration of Palestine’s crisis of leadership is direly needed — the second relevant point.

Let’s not be opaque, while Hamas may have legitimacy insofar as it resists Israeli colonialism – one thinks of the National Liberation Front’s struggle against the French during the Algerian War, but hesitates to carry the parallel very far – its tactics and unsavory ideology quickly outweigh this claim.

Hamas, for one thing, wishes to reestablish the Ottoman caliphate. It has openly promulgated the Protocols of the Elders of Zion: a fabricated and anti-Semitic text which purports to show a Jewish plan for world domination. Its rockets indiscriminately hurtle toward innocent Israeli civilians, who have themselves experienced a terrorized two weeks, and its opposition to Israeli statehood is both fatuous and a touch sinister.

Considering the unfortunate corruption of Mahmoud Abbas’ Palestinian Authority, which recently postponed its first elections in 15 years, those who wonder if less – not more – religious fundamentalism of any sort is a better way forward can only wince at the apparent lack of a viable alternative.

As Gazan families mourn and await aid while unrest lingers, one thus inclines toward the overlooked Palestinian National Initiative. Led by Dr. Mustafa Barghouti and founded along with the venerable Edward Said, the PNI is a coalition of secular and democratic groups. It preaches non-violent resistance, a two-state solution and belongs to both the Socialist and Progressive Internationals.

With little present traction, the PNI needs sustained attention from sympathetic allies. It deserves a seat at the table in talks and a visit from a delegation of Congressional progressives could go a long way toward providing momentum. This, along with the financial and medical aid which should come to Gaza from all quarters, might offer a bit of hope to the downtrodden and eminently deserving Palestinian people.