Opinion | ‘In the Heights’ boldly adapts from stage to screen 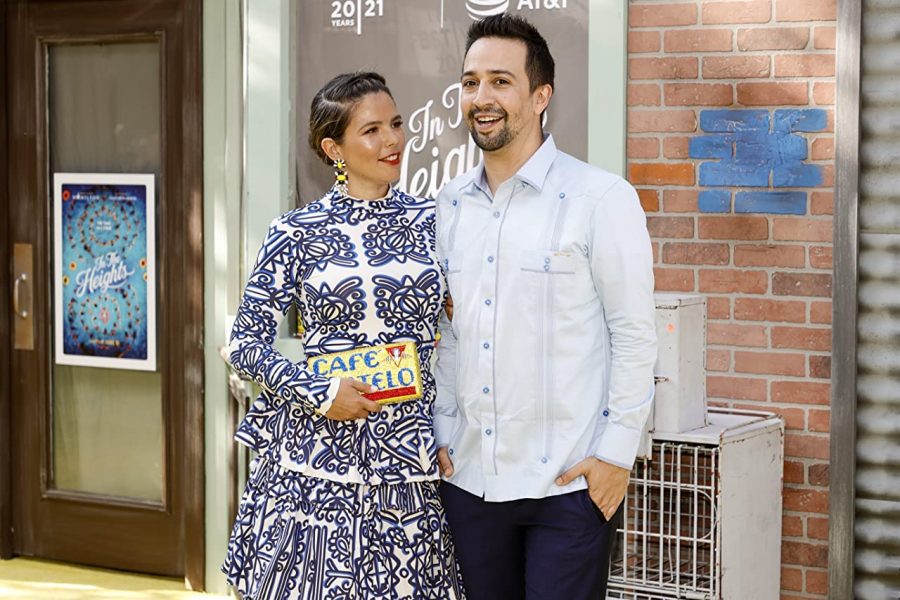 Lin-Manuel Miranda and Vanessa Nadal Miranda attend an event for the film “In the Heights”. The movie was released June 11, 2021.

Lin-Manuel Miranda, of “Hamilton” fame, wrote his first musical, “In the Heights,” during his time at Wesleyan University. It is nothing less than a love letter to the NYC neighborhood of Washington Heights and the culture within its blocks.

The musical ran on Broadway from 2008 to 2011 and won four Tony Awards including Best Musical. The piece also clinched a finalist position for the 2009 Pulitzer Prize for Drama.

After many years of negations, rumors and filming, a movie adaption of “In the Heights” was released in theaters and on HBO Max last Thursday, June 10.

In short, the movie is a spectacle — dazzling dance numbers, a catchy score, exceptionally talented singers and beautiful visuals and filmography. For a 143 minute movie (including credits), it moves fast and there is not much if any downtime between enthralling song-and-dance numbers.

Simply put, “In the Heights” is 143 minutes of Broadway goodness that will satiate those patiently waiting for theaters to open back up in September.

Spoilers ahead. Turn back now. Watch the movie. I promise you a first-watch will not be time misspent.

However, if you actually want to enjoy the movie, please do not think critically about it after those 143 minutes are over.

To change a stage musical to the medium of film, 20 minutes of songs were cut and 35 minutes of dialogue were added. Because a musical relies on songs to convey the majority of plot points and character development, cutting a quarter of the music causes serious problems.

This is the case for the movie adaptation of “In the Heights.”

By keeping the flashy dance numbers that Broadway musicals are known for and cutting incredibly important, slower, less-flashy songs that carry the plot and theme of the piece, you wind up with a musical spectacular where the actions of some characters make no sense, decisions are meaningless — if existent at all — and any dramatic irony and tension are squandered.

The central intention, the theme, if you will, of “In the Heights” poses open-ended questions to the audience: What and where is your home, who is your family and what do you owe those two abstract concepts? The entire point of the musical is to examine the tension that arises between different characters acting on their contradicting answers to such questions.

This movie adaption cripples itself by rewriting the majority of plotlines for the source material for a more stereotypical “will-they-won’t-they” dynamic between leading characters Vanessa and Usnavi and the accommodation of a completely new storyline of Sonny — Usnavi’s teenage cousin — being undocumented.

Thus, the film struggles to modify the prefabricated musical numbers into a new plot for which they were not written.

Multiple times throughout the film, lyrics mention facts that were cut in the adaptation process and therefore make no sense out of context. But that faux pas pales in comparison to the major plot issues.

Usnavi spends roughly the first act of the stage musical wooing his love interest Vanessa while waxing prolific that if only he won the lottery, he could move to the Dominican Republic. The second act then forces Usnavi, after finding himself in possession of said lottery winnings, to choose between his romantic interest and the place he — at that point — considers to be his home.

In the movie, Usnavi decides to move to the Dominican Republic less than 14 minutes in.

The decision does not involve Vanessa, lottery winners or what Washington Heights means a type of home for him. Fourteen minutes into a 143-minute movie, the screenwriters decide to make Usnavi’s subsequent decisions meaningless and free of consequence.

With this new change of plot, the “will-they-won’t-they” tension between Vanessa and Usnavi does not even matter because Usnavi has already decided to leave the country in two months.

Beyond that, the movie utterly neuters the second storyline of the stage musical consisting of a triangle of tension between Nina, her father and Benny.

I do not regret watching this movie adaptation of “In the Heights” in light of my criticisms.

This viewing has only given me a greater appreciation for the source material and how amazingly it delivers its tightly intertwining plot lines and themes. I will rewatch “In the Heights” again primarily for its musical numbers — they are genuinely spectacular. But I do not think I will ever fully rewatch the film in its entirety due to its incredibly weak delivery of theme and plot.

For those who want a more complete experience of “In the Heights,” examine the original Broadway cast album or view videos of the original stage musical on YouTube.