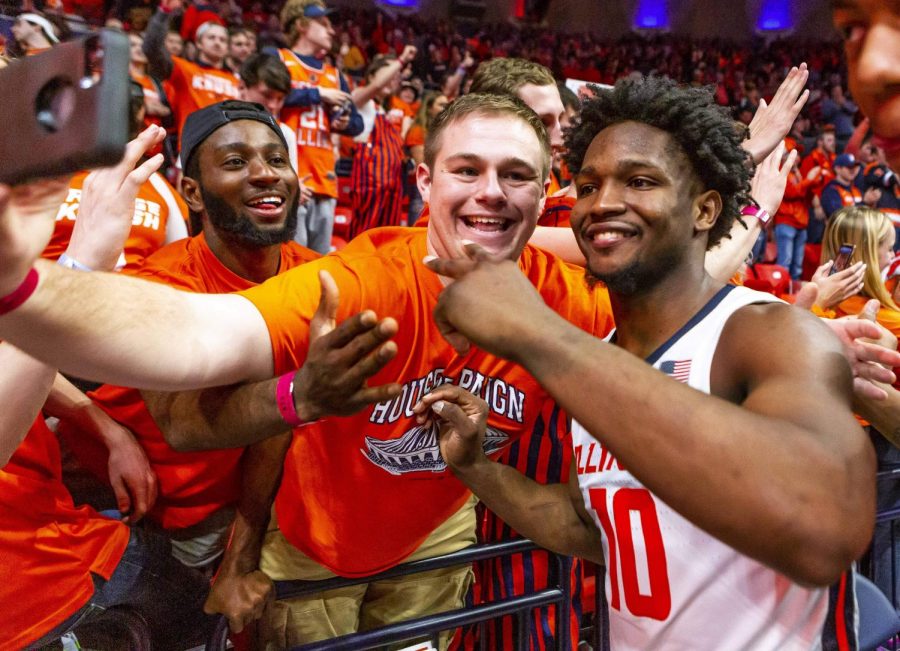 Illinois guard Andre Feliz takes a photo with Journalism student Noah Nelson during March 8, 2020. Columnist Noah Nelson owes much of his love for Illinois basketball to former guard Ayo Dosunmu who was recently drafted by the Chicago Bulls.

I’ve never been much of a basketball fan.

Sure, I spent a few years playing in my youth, but that was about the extent of it. I never watched it in my free time, and I eventually quit playing altogether.

With attending the University, much of my life has changed, including my love affair with basketball: I owe much of it to Illinois basketball and — most importantly — former guard Ayo Dosunmu.

A few weeks ago, Dosunmu was drafted as the number 38 pick by the Chicago Bulls in the late hours of the night. I had never watched an NBA Draft before, but when his hometown team chose him to join their squad, I, like many basketball fans that night, couldn’t withhold my passion.

Everything had led to that moment.

Since freshman year, I’ve attended nearly every home Illini basketball game. Decked out in orange and blue, my hands gripping the front row gate in front of me, standing alongside my buddies, I was slowly turning myself into a basketball fan once again — one game at a time.

And Dosunmu played a major role in this process.

Like every Illini fan in the country, I watched him begin his college career as a rookie freshman and transform himself into one of the best players in the program’s history. With every game-ending buzzer-beater shot, his character on and off the court and his contributions to winning the 2021 Big Ten tournament, I am proud and ecstatic to have witnessed it all.

Heading into senior year this fall, Dosunmu will sadly not be playing for Illinois anymore. Who knows how Illini games will be without him there, but I know that when the Bulls begin their season, I will proudly change my orange and blue jersey for a red and white; I will support him during his professional career.

For the past four years, the University has been my home away from home. For Dosunmu nowadays, he’s back home playing for the Bulls. Even though our paths won’t cross as much anymore, we are both safe and sound at home.

In the 1939 classic film “The Wizard of Oz,” Judy Garland, playing the innocent farm girl Dorothy, sits up in bed from her dream over the rainbow. Once she sees her family and friends gathered around her, she proudly asserts, “There’s no place like home.”

Thank you Illinois basketball, especially Dosunmu, for helping me find my love for the sport once again. I will never become obsessed with statistics or the like, but that doesn’t stop me from being a fan.

I will support you in your basketball journey, just like you have done for me.