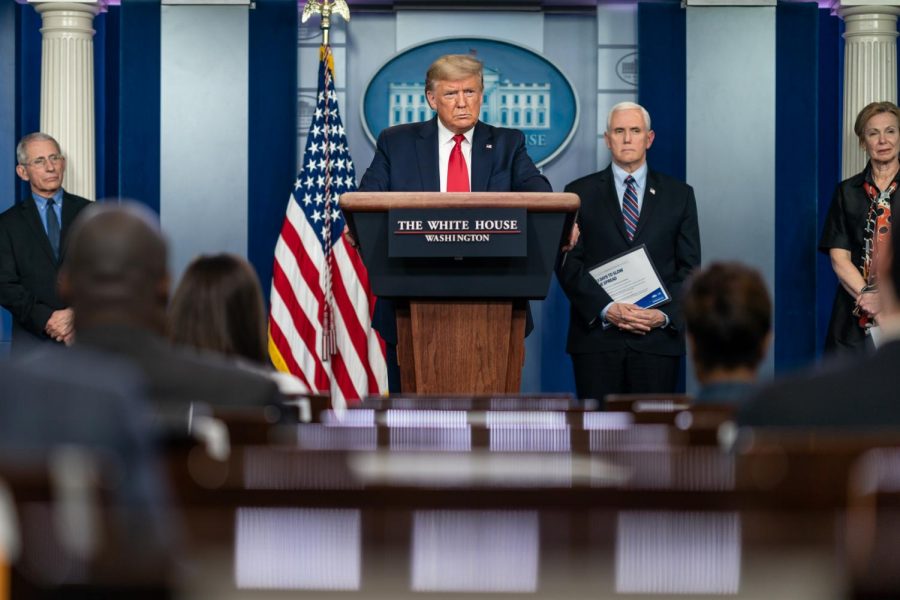 President Donald J. Trump, joined by Vice President Mike Pence and members of the White House Coronavirus Task Force, listens to a reporter’s question at a coronavirus (COVID-19) update briefing on Thursday, March 26, 2020. Columnist Dennis Austin argues that Donald Trump’s demise is partly due to how he handled last summer’s events with COVID-19 and racial injustice.

In the midst of a nation on fire, the former president hid in cowardice.

Last summer, cities such as Chicago, New York, Los Angeles and others saw a growing wave of violence as protesters marched against the assassination of George Floyd in Minneapolis. A year later, disgraced police officer Derek Chauvin was found guilty and sentenced to 270 months in prison.

In the District of Columbia, where crowds gathered to angrily voice their displeasure of a justice system in peril, Donald Trump from his bully pulpit continued to inflame tensions as looting and violence engulfed the nation.

This was a president who had previously supported government uprisings in states with Democratic governors: In Michigan, mobs of protesters stormed the statehouse, defying Governor Gretchen Whitmer’s stay-at-home order.

What we witnessed was not only a derelict of duty but a president who disregarded leadership entirely.

Throughout that ordeal, we did not see Trump work to heal a nation reeling from yet another chapter of police violence. George Floyd’s name was added to a laundry list of Black men, women and children who were murdered at the hands of a corrupt and racist police system.

Multiple American cities authorized the National Guard to restore order, as looting and rioting continued in many parts of the country. In times of distress, it is expected for our political leaders to assume control.

The reality of calming tensions and preaching a message of unity had long been the script in periods of division. Trump abandoned that script. He instead chose to belittle, insult and snarl.

His childish, narcissistic behavior became more glaring as during this time he, those in his administration and his supporters began to openly doubt Anthony Fauci. A man, with multiple divorces and bankruptcies, feels he is qualified enough to express skepticism over a decade’s long physician experienced with pandemics.

We, as citizens, have an expectation of our elected officials to guide us in troubled times. To reassure us that despite tragedy, there is hope.

Admittedly, George W. Bush is not one of my favorite presidents. His reckless foreign policy being one of many reasons for America’s clumsily withdrawal from Afghanistan. What I find admirable, however, was his response following 9/11.

The former president struck a tone and tenor aimed at comforting a grieving nation.

Barack Obama, with whom I also have criticisms, displayed the grace and mood of a leader whenever America was faced with the horror of a mass shooting.

To be a leader is to calm tensions. Donald Trump chose to absolve himself of that responsibility last summer. In his mind, ranting and raving on Twitter like a prepubescent teenager was leadership.

In “Trumpworld,” this was another episode of “The Apprentice.” The storylines spoke for themselves, and his rabid and ignorant base was an audience of people who desperately tuned in to see what happened. A craving for reality television-esque drama in place of responsible political leadership.

The man who occupied the White House made it abundantly clear that criticism was non-negotiable.

Be it his failed humor at suggesting people inject bleach in themselves to combat COVID-19, his racially charged anti-Chinese sentiments that lead to a rise in hate crimes against Asians or his pathetic attempt at holding a Bible in his hand, as law enforcement charged peaceful protesters with tear gas and rubber bullets, at his order – we will remember the summer of 2020 as a time where presidential leadership was absent.

Such was the reality when, amid his lie-filled paranoid rhetoric that the election was “stolen,” in favor of now-President Joe Biden, inspired an attack on American democracy on Jan. 6. An act of borderline treason was carried out by his equally deranged and morally corrupt supporters, who broke into the offices of elected representatives and assaulted police officers. We had no leadership.

At a time where America reached a climax of dealing with both systemic racism and a global health pandemic, a calm steady hand would have sufficed. Unfortunately, that was not the case. To have lived through that summer was to know that America had no president. We had a child at the seat of power.