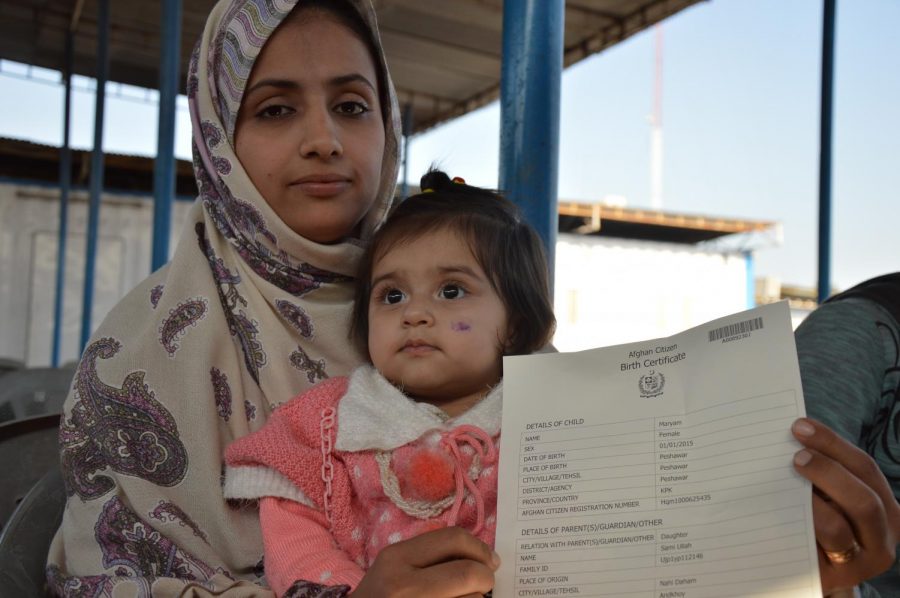 Neelab holds up her one year old’s birth certificate. Columnist Eddie Ryan shares his opinion on the Afghanistan Refugee problem that is now taking place after the United States left Afghanistan.

With the United States gone from Afghanistan, several details mustn’t be allowed to settle into obscurity. After a withdrawal which President Joe Biden dubbed “an extraordinary success,” thousands of Afghans and approximately 200 Americans remain effectively stranded.

One sets terms this way not out of spite for one’s fellow nationals — far from it — but to assert a proper ordering of sympathies too often elided. While rarely mentioned first, it is the Afghan people, sufferers of 40 years of consecutive war and a myriad of interventions, whose plight is most stark and to whom America’s keenest duty is owed.

The refugee question is now obviously the most pressing — but its unique multidimensionality bears emphasizing, given that much of the issue concerns not just those who leave, but all those who can’t. An account of the current outlook for both groups, in addition to some thought as to what should have been and can still be done, thus follows.

For those witnessing the second Talibanization of Afghanistan firsthand, unease abounds. One major reason is the Taliban’s odious and futile plan to reduce women to shadows and concubines. Yet others must also worry; ethnic minorities like the Hazara Shiites, massacred during the Taliban’s first reign, are one to have already faced danger. Journalists, too, along with Western allies have been targeted in manhunts.

This slew of consequences was foreseeable even as Taliban spokesmen promised no reprisals and some equality for women. The two common caveats to such pronouncements — that equality would come “within the bounds of Islamic law” as the Taliban sees it, and that its fighters haven’t yet been trained to respect women — augur poorly for the days ahead.

For the remaining and the evacuated alike, both of whom deserve the name “refugee,” things will depend on Western willingness to help.

What should have been done before the withdrawal is a major expansion of Special Immigrant Visa — or S.I.V. —  provisions, but this was opposed from several directions. Ashraf Ghani, Afghanistan’s then-president, didn’t want his weakness broadcast to the world, for one. Furthermore, some of the Republicans who’ve adopted such a lachrymose posture since the withdrawal, full of cheap sympathy for Afghans, voted in July against expediting their S.I.V. approvals.

If recent statements are true, then some covert evacuations by the U.S. will continue and Afghans with visas and passports may actually be allowed to leave. Other direct measures the U.S. can take for trapped refugees include funding food relief programs, as United Nations food supplies in Afghanistan are set to run out by the month’s end.

The U.S. could also follow the example of the Western Union, which has resumed the flow of much-needed remittances to Afghans. As I wrote last week, the U.S. has a moral obligation to consider the legitimacy of imposing sanctions on the Taliban that will batter Afghans; so far, it has left them in place.

In addition to bolstering the humanitarian campaign, America must lead in admitting refugees. This will matter even more if xenophobia sparks another political migration crisis in Europe as occurred with Syria.

So far, 98 countries have agreed to admit evacuees. But more is owed than this: Given America’s leading role in the intervention, every Afghan who wants it should receive automatic asylum on American soil. The military’s recent assurance that almost no Afghan refugees have posed security threats after screening ought to drown out any whining by Stephen Miller and company.

Indeed, Afghan refugees really ought to receive reparations. However infeasible this seems, particularly considering Congress’ refusal to even discuss this egregiously overdue measure for Black Americans, it must be advocated.

Afghanistan will now fade from the airwaves, the America-centric withdrawal having capped off a misconceived, corrupt and arrogant war. The struggle in Panjshir valley and the presence of U.S. foe and Pakistani client the Haqqani network, both intensely interesting, won’t draw much attention.

But the desperation of refugees won’t recede; it will only deepen. And it will be criminal if the U.S. responds by wiping its hands of guilt, closing its eyes and allowing agony to flourish.