Opinion | Keep our spotlight on gerrymandering 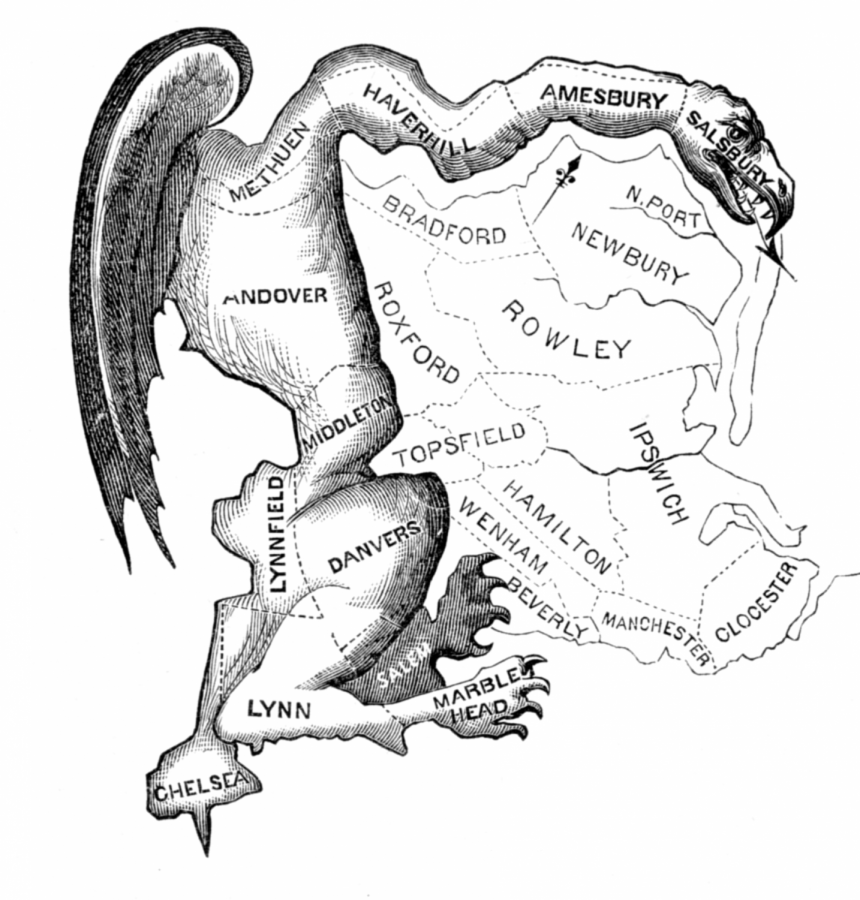 Original cartoon of “The Gerry-Mander”, this is the political cartoon that led to the coining of the term Gerrymander. The district depicted in the cartoon was created by Massachusetts legislature to favor the incumbent Democratic-Republican party candidates of Governor Elbridge Gerry over the Federalists in 1812.

Noteworthy politicians such as former Democratic President Barack Obama and former Republican Gov. Arnold Schwarzenegger of California have espoused redistricting reform and have helped tremendously to raise awareness of the issue.

With that said, countless states still redistrict the traditional way, which congenitally includes political bias. For this reason, the message must continue to be loud and clear: Partisan gerrymandering needs to die and until it does, our democracy will lack the fundamental trait of competitive elections.

On the whole, these redrawn maps are made so the majority party has almost secured electoral success, even if the odds are against it. This misconduct, wherein maps are drawn to secure as big of an advantage as possible for one’s own party, is known as gerrymandering.

The degree of partisan gerrymandering can be seen by the ratio of votes cast for a certain party to the number of seats won by that party. This disparity has been termed the efficiency gap.

In Texas, for example, Republicans won 50% of the votes cast in the U.S. House races but ended up gaining 64% of the seats. Manipulation of the maps can be so intense some states redistrict so the party that gains fewer votes can still claim a majority of the seats.

Gerrymandering, on principle, is one of the largest disservices to American democracy. It clearly contradicts the core essence of democracy by allowing legislators to effectively choose their constituents and circumvent competitiveness in their elections.

Legislators should not choose their constituents; constituents should elect their legislators. Gerrymandering gives credence to those who choose not to vote or participate in civics because they believe the system is rigged. When elected officials are given the power to draw the very district that will reelect them, the conflict of interest is blatant and insurmountable.

Gerrymandering not only causes political efficacy to diminish greatly, but it causes a large number of other problems, too. It causes elections to be uncompetitive as well as unrepresentative, helping to reinforce the public’s perception that career politicians are out of touch and corrupt.

In North Carolina — a state that has recently been under scrutiny for a litany of partisan power moves — a panel of judges reviewing the maps asseverated the maps were unconstitutionally gerrymandered by the North Carolina GOP. It also asserted there was not enough time to redraw the maps before the 2018 midterms.

In Pennsylvania, a vital swing state in elections, the GOP-controlled legislature drew up maps that were rejected repeatedly by the Pennsylvania governor. Eventually, the state’s Supreme Court chose a Stanford law professor to redraw the maps which unfairly favored Republicans.

The story does not end there, however. Since then, a dozen Pennsylvania state lawmakers threatened to impeach judges on the state Supreme Court over their decision. The Republican chief judge rightly rebuked the threat. The president also turned to Twitter to emphatically defend the maps from scrutiny and accuse the Democratic Party of trying to steal the election by being critical of the maps.

Threats to impeach impartial court judges over disagreements about a ruling, as well as attempted vindications from the president of the United States over clearly unfair maps erected out of partisanship, should be promptly rejected by the public. When lawmakers are willing to spend time, legal resources and money trying to assert the validity of bogus maps, contempt is shown for the system.

Many states have already taken action to prevent partisan abuse of the map-making process. In 2018 alone, five states passed ballot initiatives or took legislative action to reform the redistricting process to be fairer in some capacity.

In the past, courts have ruled in favor of gerrymandered maps, not because they are legitimate maps but because despite some districts’ blatantly gerrymandered looks, it is hard to prove in court a district was drawn to gain an electoral advantage.

Gerrymandering is a technical issue with a technical process and for that reason, it is forgotten and may seem insignificant.

The effects this small issue has are unconscionable. The quality of American democracy decreases significantly when the phenomenon occurs and it decreases further when American citizens neglect their civic duty to take action.

Edmund Burke once said, “All that it takes for evil to triumph is for good men to do nothing.” Gross negligence to a clearly undemocratic practice will convince politicians they are free from scrutiny to choose their own constituents. Any reasonable patriot — Democrat, Republican or Independent — would act to the fullest possible extent to eradicate this disgusting malpractice promptly and permanently.