A lot can change in one year 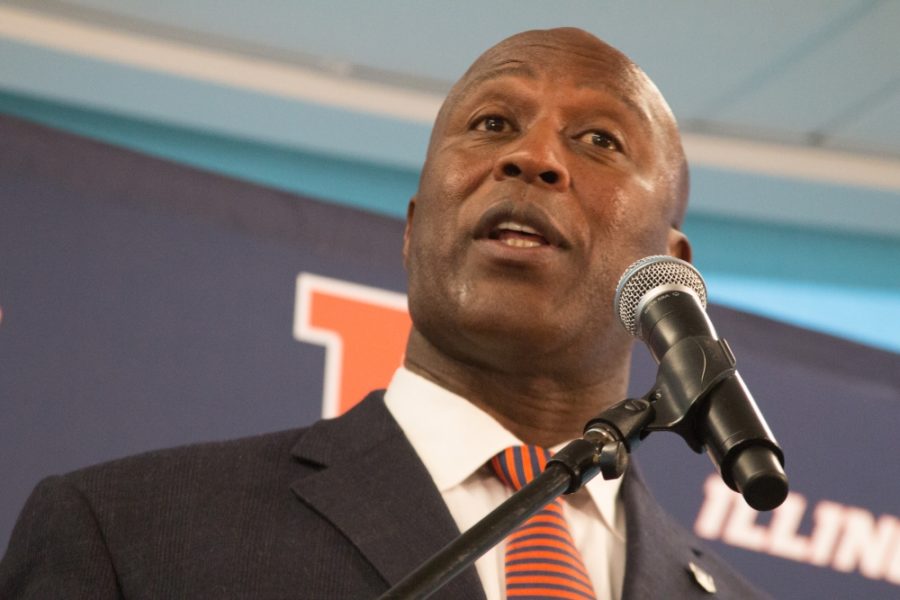 CHICAGO — A year ago at Big Ten Media Days, former Illini football coach Tim Beckman managed to embarrass himself, his team and the University by fumbling over the meaning of a silly acronym. That was before he had to field questions about the rumors of player abuse and mistreatment that were swirling around his football team.

What a difference a year makes. The program has done a complete one-eighty.

Lovie, cool as a cucumber, calmly spoke about the energy surrounding his team and represented the University the only way he knows how—with complete class. That’s a stark contrast to Beckman.

With quiet confidence, Lovie captured the room’s attention while proving that, for the first time in a long time, Illinois football matters. That sounds weird to say. Here are my takeaways from today’s event.

5. There’s no concrete expectations for Illini football in 2016—and that’s OK.

When asked about his hopes for the 2016 football season, Illini Athletic Director Josh Whitman was smart not to talk in terms of wins and losses.

“Certainly Lovie brings credibility and enthusiasm to the program,” Whitman said. “But there’s a lot of work to do. It’s not something that just happens at the snap of your fingers.”

Fans need to be realistic, too. Is this team going to compete for a Big Ten title in 2016? Absolutely not. Right now, however cliché it may be, it’s not about the standings. This program is trying to rebuild its football team while bandaging the scars left from the Beckman-era.

One thing is clear from Whitman: He’s serious about winning. His slogan, “we will win,” is more than just a catchy motto to plaster on billboards and print on tee-shirts. He’s been working hard to repair the Illini football brand and restore energy in the program.

So, what’s the goal for this season? Six wins? A victory in a bowl game? I’m not sure, but I don’t think it matters. If Whitman and Smith continue to build the Illinois football brand, the recruits and fans will come. In due time, so will the wins.

4. Lovie’s defense is serious about offense.

Yes, you read that right. Smith spoke at length about having an offensive mentality on the defensive side of the football field. He said the goal every play defensively is to score. That means trying to strip the quarterback, punch out the football or dive for that big interception. Take the ball away and run it the other way. It’s that simple.

Dawuane Smoot told a story about the first time he met his new head coach. Lovie was holding a football in his hand and asked Smoot, “When you’re sacking the quarterback, what are you going for?”

“Go for the Quarterback, go for his body,” Smoot replied.

Lovie held up the ball and said, “No. You go for the football.”

Right then and there, he bought in.

“We get yelled at if we don’t try to strip the ball when we’re making a tackle,” Smoot said. “Taking the football away is something that’s preached every day.”

3. It’s all about the ground-game.

Coach Smith stressed the importance of running the football this season. While he wouldn’t answer with specific numbers when asked about the number of carries sophomore tailback Ke’Shawn Vaughn will get, he did stress how critical he’ll be to the offense.

“I think he can do it all,” Smith said. “He can make you miss in the open field, run with power in-between the tackles, he can catch the ball and he’s got great vision. In order for us to have success, Ke’Shawn needs to have a good season. And he realizes that.”

Quarterback Wes Lunt, working under his fifth offensive coordinator in his college career, is excited to work in Garrick Mcgee’s run-first offense.

“I think the run game is so important in developing a successful passing game,” Lunt said. “I think that’s something we need to do this year. On second and six, let’s pick it up on the ground. Just something different to help us set up the play-action game.”

When I asked Smoot about playing for Lovie, he broke into a big smile. It was one of those moments that a recording device or a camera couldn’t quite capture.

How could you not love playing for a guy with the type of track record that Smith has? But, his style is different. He’s not fiery, he’s not overly enthusiastic. He’s an even keel leader that expects the best from his players. And he gets exactly that.

“When you see Coach Smith, you know it’s game-time,” Lunt said. “It’s time to be on your best behavior. It’s a really professional atmosphere.”

I can’t stress this enough: Fans need to be patient. This football team was 5-7 last season and lost key contributors like DE Jihad Ward, RB Josh Ferguson and OL Ted Karras. This year’s team is still learning their new schemes and getting comfortable with their new coaching staff — in the same way, Smith’s staff needs time to get comfortable with their personnel.

The wins will come, and the biggest takeaway is this: This program is headed in the right direction.