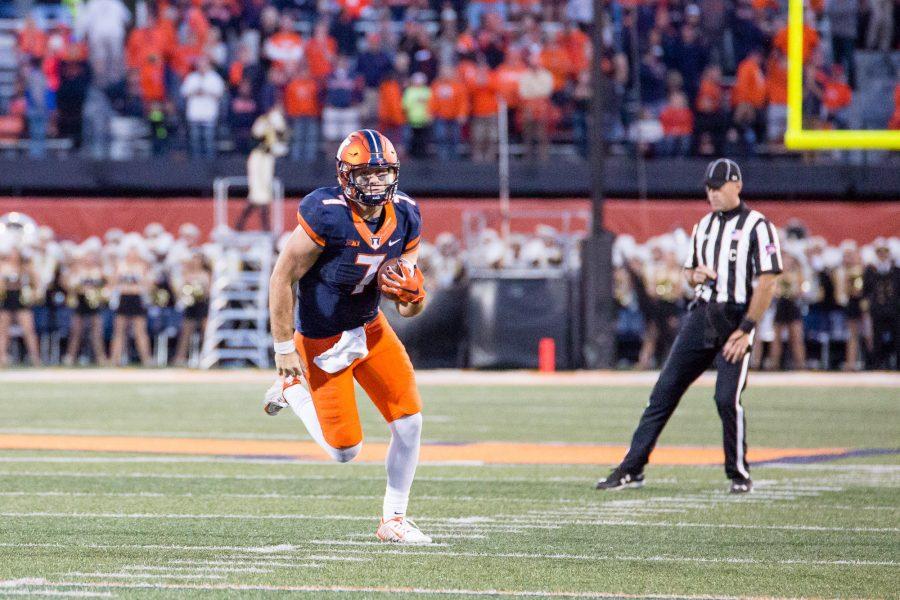 Illinois backup quarterback Chayce Crouch runs down the field during the game against Purdue at Memorial Stadium on Saturday, October 8.

The basement bowl, as I called it, lived up to its hype alright, and Illinois football avoided a total embarrassing 2016 season by winning at Rutgers on Saturday.

The team is not the worst in the Big Ten. Fans can say that and breathe a sigh of relief that they’re not at the bottom.

Like all of Illinois’ wins and close calls, it wasn’t pretty. Then again, did anyone expect the last-ranked team’s matchup to be a wild, thrilling well-played game?

It was an ugly, penalty, turnover-filled game.

The Illini had six penalties for 60 yards, showing the lack of discipline that has plagued the team all season.

But Rutgers had five turnovers, and though Illinois finally showed the takeaway spirit that it has preached all season, it failed to truly capitalize on it.

Once again, the Illini relied on the run game, with 228 of the team’s 320 offensive yards coming from rushing. Running back Kendrick Foster impressed again in his first start with 108 yards and a touchdown. He added 8 passing yards and another touchdown to his stats as well.

Crouch even started to look banged up in the second half, with some pain clearly in his shoulder. Smith said if Crouch was really hurt, he wouldn’t be playing, but he did have soreness.

It will be interesting to see if Smith keeps Lunt — who suffered a back injury against Purdue last week — out another week or if he will be ready come the Illini’s trip to Ann Arbor, Michigan.

Crouch got the win, but did not have nearly the performance of last week. He rushed for 25 yards and only attempted three passes in the second half.

So, Illinois, take the win in stride, because the second half of the season only gets tougher. And chances of adding more wins to the record dwindle.

Smith said after the game that just to win is good.

He’s right: It’s got to be a huge relief for him and fans alike — Illinois needed that win.

He also said that the road victory should give his team confidence heading into the matchup against Michigan next weekend.

Confidence is important, but realistically, a win at Rutgers is hardly going to help a team that can’t secure easy wins face one of the top-five in the country in one of the toughest college football environments.

The Big House doesn’t have space for basement-level teams.