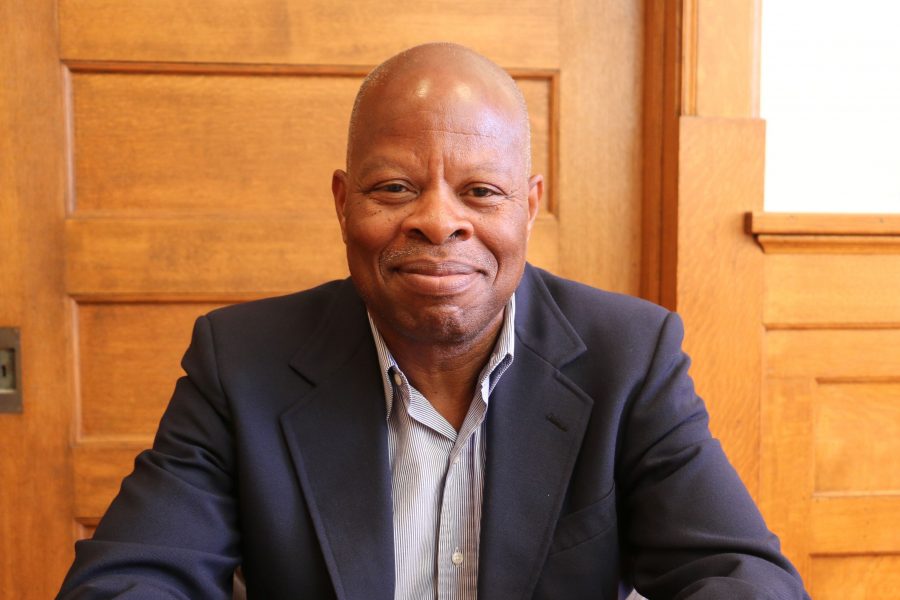 Michael Peterson, a graduated alum, returned to the University to talk about racial climate change with Howard Wakeland, the retired dean of the College of Civil Engineering on Friday.

Editor’s note: Although the reporter and the source share the same last name, there is no immediate relation.

Grinning from cheek to cheek and stepping foot on a campus he has not returned to in over 40 years, Michael Peterson recounted what it was like to be a black student at the University in the 1970s.

Amid outward displays of discrimination and an unwelcoming environment, the alum said he values what he learned and the moments of hardship that ultimately made him stronger. The experiences of discrimination inspired Peterson to raise minority student involvement in the engineering field.

A graduate from the civil engineering program in 1974, Peterson returned to campus this past week to revisit his time at the University. In preparation for his trip, Peterson worked to schedule meetings with current staff members in the College of Engineering and a past mentor who helped shape who he is today.

During his time as a student, Peterson said he had trouble connecting with other students and faculty members in the engineering program until he met former dean Howard Wakeland. Wakeland lent him a hand as well as a friendship while completing his degree.

“He was such a mentor to me, he counseled me and was such a loving person,” Peterson said. “I hold him in such high esteem. I can’t really put into words the friendship he showed me and the kindness and selflessness and non-racial mindset he had.”

In comparison, there were moments of exclusion Peterson faced specifically due to the color of his skin during his time as a student.

Although the Civil Rights Act was passed a few years before he enrolled at the University, Peterson recalled times when he would be denied services from businesses on campus and was a target of actions of hate. A barber told him he would not cut his hair, and Peterson said Denny’s would refuse black customers when he and friends would try to eat at the restaurant.

Walking down fraternity row was something black students tended to avoid, yet Peterson traveled that way one Saturday evening to see what would occur.

“Man, I got ape and monkey sounds and bananas and oranges thrown at me. That was a turning point for me when I decided to move up to the north end of campus,” Peterson said.

These events were ones Peterson felt he could not dwell on but had to move past in order to succeed academically. By focusing on engineering and forming a Black Students of Engineering Association with the assistance of Wakeland, Peterson found it possible to withstand the events happening around him, whether it was racial slurs written on bathroom stalls or people spitting on him from cars as they drove past.

“I was willing to accept the fact that some people just thought that way, but as long as my personal safety wasn’t threatened, I’d be okay. You move past it to focus on what you’re here for,” Peterson said.

When reunited with Wakeland during his recent visit to the University, Peterson shared how the time they spent together positively impacted his studies. Wakeland spoke to the intentions of the engineering department back when he was dean, and their intent to connect with students in order to develop meaningful relationships, especially with those who were underrepresented.

“We put our heart and soul into those efforts; this campus is not meant to work on the big picture but instead to reach out to the individuals,” Wakeland said.

The meeting between the two took place in the same room Peterson remembers holding meetings with other black engineering students. The connection was one of respect and led into Peterson’s explanation of how he wanted to begin reaching out to students to join the engineering industry.

Sahid Rosado, outreach coordinator for the College of Engineering, was able to meet with Peterson and discuss the current goals for reaching students who may not be familiar with engineering or the STEM fields.

By developing an outreach program for college students to mentor other students from the Chicago Public School district, Rosado said the hope is for younger generations to become more educated about options they may have in the future.

“I would still consider the program to be successful even if the students decide to go elsewhere. If they go to college regardless, that’s a success for me,” Rosado said.

Looking outside of just working in the engineering field, Peterson said a new focus of his is to gain more involvement from people who have been historically marginalized.

A current goal of Peterson’s is creating an estimating company, which determines the cost of a project, so students can look at the process of engineering from multiple perspectives. His intent is to expose students to various construction trades and engineering professions.

The momentum from his time at the University and his life in the engineering field have welcomed Peterson into the next chapter of his life, one where he is choosing to lead the way for other minority students on the prospect of beginning a college education.

“I’m on a technical track of being an engineer, but I also am on this other track of wanting to end human suffering where I see it,” Peterson said.