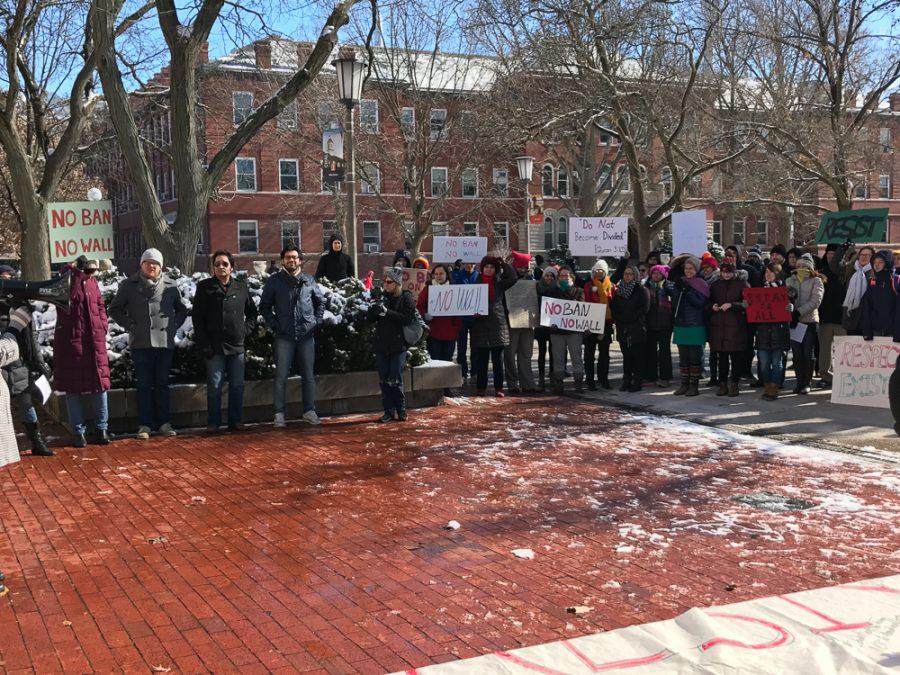 Protestors gather on the Quad for the Immigration rally on Thursday, Feb. 9.

“Academics United – No Visa and Immigration Ban” aims to highlight the effects the ban has had on students. Trump’s executive order suspends entry from Iran, Iraq, Libya, Somalia, Sudan, Syria and Yemen for 90 days. There are 143 students at the University from these countries.

Rezvan Shahoei, one of the rally organizers and a Ph.D candidate in physics, hopes the rally will show people academics can unify around a cause and will prevent any further actions.

“Something like this is emblematic of a bigger problem,” she said. “If we don’t stand up now, we might expect worse, you know? It’s important at an early stage to recognize what’s happening and to respond to it strongly.”

Martin McFarlane, director of international student and scholar services, Hadi Salehi Esfahani, an Iranian-born economics professor, one Syrian student and one Iranian student will speak at the rally.

The three said collectively that organizing the event was hard, but their passion for it overcame the difficulties. “It was tough,” Shahoei said.

Shahoei said she has appreciated support around the community, but thinks this event will help people from the affected countries get their message across.

“There is no guarantee anything will happen,” Shahoei said, “But if we don’t do anything there is a guarantee nothing changes.”

Ken Salo, professor in urban and regional planning, was able to speak at the rally. He teaches a Grand Challenge Learning course called “Race and the City,” with themes focused on racialized and xenophobic inequalities.

He said he encouraged his students to become involved and aware of these inequalities. “That’s the motivation, and they’re all beautiful, smart students who are going to have to step up to these important and creative challenges,” he said.

Salo said he stressed the importance of education and education that challenges and works to transform social inequalities.

“Universities and campuses are public places, and they should be open, and it’s one of the most important places for people to learn tolerance and to engage with strangers and to find common ground,” he said. “Big, public universities, like the University of Illinois, are central for ongoing democratic practices and the freedom of education.”

Hannah Spevak, a freshman in Social Work, said she thought it was important that she and her peers were able to express their rights as students and as citizens.

“I’m very passionate about immigration rights and just like the current situation of our country, and I think it needs to be changed,” said Spevak. “I’m not sure if this one rally will (have an impact), but I think it’s like a domino effect. One rally can lead to another one and they expand and get greater in size.”