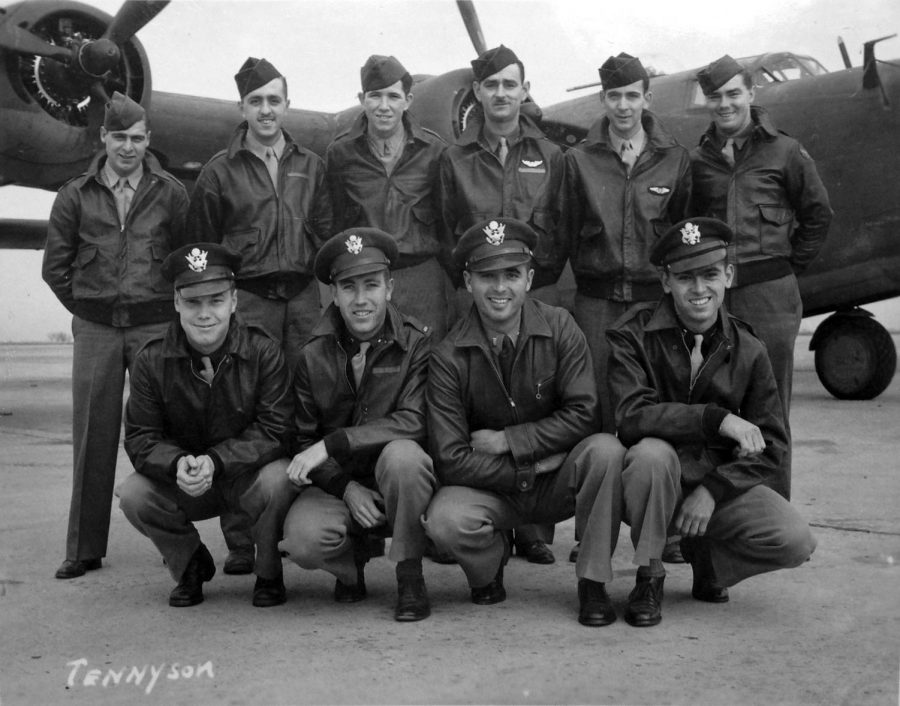 This B-24 bomber crew, plus an additional crewman, were lost on a bombing mission over Papua New Guinea in 1944 during World War II. The bombardier, 2nd Lt. Thomas Kelly, Jr. (front row, far right) was a relative of University professor Scott Althaus. Five years ago, Althaus and members of his extended family formed a research team to learn the details of Kelly's final mission, which would also lead to the finding of the plane, “Heaven Can Wait.”

A B-24 bomber plane that went missing during World War II was recently found in Hansa Bay, Papua New Guinea. Eleven American servicemen were in the plane when it went down in 1944.

Many of those unaccounted for are thought to be resting throughout the world, which could be in the ocean, temporary cemeteries where fighting occurred or on the battlefield.

To help find soldiers who’ve gone missing in action, there are some organizations such as Project Recover, which helped find the B-24 bomber plane containing the 11 missing Americans.

“After 11 days on the water, and a search that covered nearly 27 square kilometers of the seafloor involving scanning sonars, high definition imagers, advanced diving and unmanned aerial and underwater robotic technologies, Project Recover located the debris field of the B-24 bomber in 213 feet of water,” said the Project Recover website.

2nd Lt. Thomas Kelly, Jr. was one of the 11 men found and relative of Scott Althaus, director of the Cline Center for Advanced Social Research and professor in LAS.

Althaus worked closely with Project Recover to find what happened to his relative.

Even though the B-24 bomber plane was found in October 2017 by the Project Recover team, Althaus found out about it on March 30.

“On that call, they told me pretty quickly that they found the plane and I was shocked because I just didn’t expect that. For me and the Kelly family, I think that whole Easter weekend was a mix of exhilaration … but also, we really were grieving,” Althaus said.

The answer brought a lot of closure to him and his family since they did not expect to find the plane.

“This is on the other side of the earth and is an extremely remote undeveloped area. The nearest dive resort is eight hours away by boat,” he said.

On Memorial Day in 2013, Althaus decided to investigate what happened to Kelly, his only relative missing in action, and his other family members that perished in World War II.

Throughout the past five years, he has periodically researched his family history concerning World War II, specifically focusing on the research around Memorial Day.

The move came from Althaus doing extensive academic research, which involved him entering statistical data of wartime casualties for his job.

“I started on the internet and with some newspaper databases that we had access to at the library and just did a name search on my relative’s name,” Althaus said.

His family began to help him conduct research and he started to receive help from different contacts that ranged from Belgium to Australia.

Many unexpected findings came from the research, such as finding the B-24 Bomber plane, as well as the kindness Althaus experienced from people.

“I think the biggest unexpected part of this was how generous complete strangers were to us time and time again in answering emails and suggesting steps we could take,” he said.

An example Althaus cites was when an expert told him a picture he had was not correct due to the paint job on the bomber plane.

Althaus recommends for other families to research what happened to their family members who went missing in action.

With Memorial Day coming up, Althaus will take time to remember his family who gave their lives to the war.

“Memorial Day is about remembering, reflecting those who have given their lives and service to our country and we can do much to honor those memories by sharing their stories; by remembering the lives that aren’t here with us now,” Althaus said.