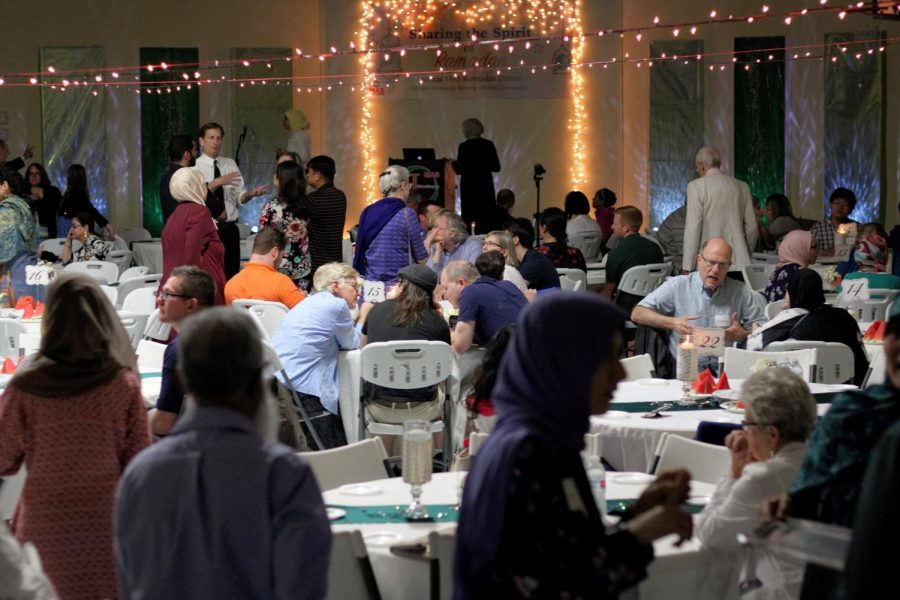 Members of Muslim American Society at the ninth annual interfaith Ramadan “Iftar” Dinner in the MAS gym on Thursday, May 31. Ramadan occurs during the ninth month of the Islamic calendar year and is when people engage in strict fasting from sunrise to sunset.

Members and volunteers of the Muslim American Society hosted the ninth annual interfaith Ramadan “Iftar” Dinner in the MAS gym to engage with community members through prayer and traditional food Thursday evening. The dinner provided opportunities for community members to learn about Muslim culture by experiencing the sacred month.

Ramadan occurs during the ninth month of the Islamic calendar year and is observed by engaging in strict fasting from sunrise to sunset. Although the practicing of Islamic rituals is a personal responsibility, adding the communal element to it increases the personal commitment, said Ahmed Taha, MAS president.

“This event is part of a bigger MAS program which is called ‘Know Your Muslim Neighbor’ that repels any stereotypes or Islamophobic rhetorics related to the beliefs of practices of Muslims,” Taha said. “We aim to celebrate similarities in the beliefs and practices between Muslims and their fellow citizens by understating and tolerating differences.”

The event began with a description of the Iftar process, which involves breaking the day-long fast with fresh dates and watermelon led by MAS members Malaak Saadah and Salma Elnaggar. The duo dismissed participants to pray Maghrib in a separate banquet room before the Iftar dinner.

Saadah, an incoming University freshman, said she has been going to the annual event since its inception.

“It’s a way for people to gather and socialize with each other over food and prayer,” Saadah said. “It’s important for people to be exposed to our culture outside of the media and see what we do during this sacred time.”

Taha said this event raises awareness by increasing the social bond between community members and deepening the relations between the families, moving towards a more cohesive community. Participants were encouraged to foster unity and religious tolerance over dinner provided by local cooks.

Bonding over food and emerging in a different culture is a way of understanding differences in today’s world, said Sister Patsy Howell, another MAS member.

“There are mothers with babies and kids who go to school here who are tied to a stigma of violence,” Howell said. “It’s amazing that people have this idea of Muslims always engaging in war with Americans. It’s important to show people that we are not aggressive or violent.”

Community participants were served traditional food, including rice made by local MAS members and beef catered from Chicago. Throughout the feast, the MAS welcomed Champaign Mayor Deborah Frank Feinen, Urbana Mayor Laurel Prussing and Bob Flider, Director of Government and Community Relations in the Office of the Chancellor, to speak before offering guests the opportunity to provide feedback.

Taha said the annual dinner raises the level of awareness of the bigger community of the pillars of Islam, the beliefs and practices of fellow Muslims. The MAS hosted 286 participants from various religious and ethnic backgrounds this year, but Taha said the organization is expecting attendance to grow.

“We might be looking for a bigger venue to accommodate the increasing attendance we have been witnessing in the last couple of years,” Taha said. “The event connects the Muslim community with the bigger community, which is highly needed for overall health and harmony in the society.”