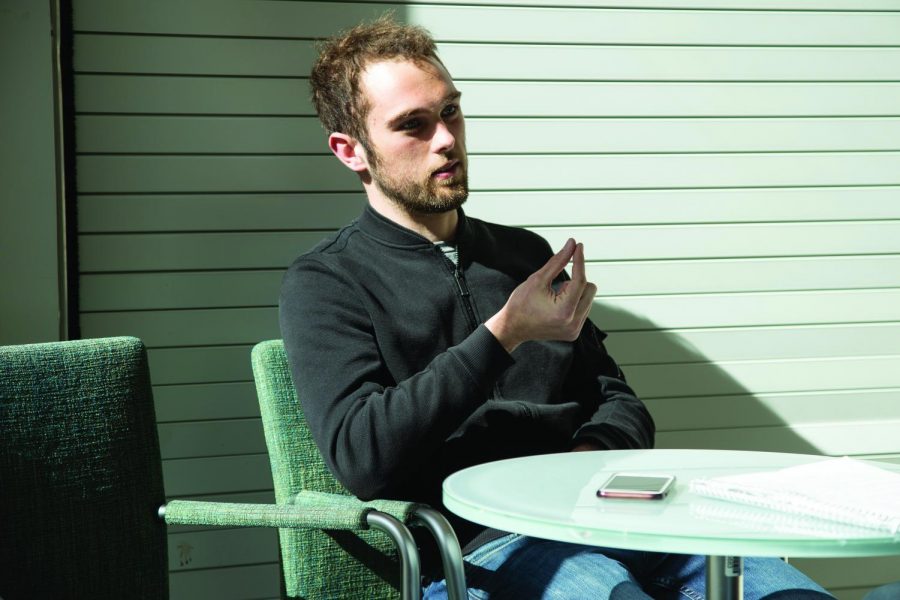 Brandon Yates discusses the purpose of his app. DeepWalk plans to improve sidewalks by reducing gaps in the walkway.

Walking across campus, the average student does not need to give the dimensions and the cracks in the sidewalks a second thought, but for those who use a wheelchair, the reality of easily moving from class to class or from Green to Gregory isn’t as easy. Although there are national regulations in place to ensure easy access for those with disabilities, the time consuming and expensive process of auditing and fixing problematic sidewalks has left many curb ramps not up to code.

The issue of inaccessible curb ramps is a prevalent issue in the U.S.. Brandon Berg, graduate student in Business said 80-96% of ramps in cities are inefficient.

Realizing the inefficiencies of the current auditing process, in December 2017, Brandon Yates, sophomore in Engineering and his team decided to create a software that would allow city planners and the public to easily measure and map out the dimensions of a sidewalk with a mobile application. This became known as DeepWalk.

Utkarsh Awasthi, sophomore in Engineering and employee at DeepWalk, explained the biggest issue with the current auditing process is data collection. Awasthi said the city will hire around 10 interns who manually measure the sidewalk. From these measurements, the city will decide whether they need to fix the sidewalk in question.

“In total, (the city) measures the sidewalks four times, three times before they reconstruct the sidewalk and one time after,” Awasthi said.

The outcome of such a process means updating the sidewalks to meet regulations is a time-consuming process. Yates, DeepWalk’s founder, explained it took Champaign-Urbana two years to audit 15,000 sidewalks.

Berg, an employee of DeepWalk, said DeepWalk aims to reduce the time needed to produce accurate measurements from hours to minutes. Furthermore, Yates said the data collected currently is only used in deciding whether or not a sidewalk is compliant with regulations.

“What we are trying to do is collect enough data to be used beyond decision making. (With the app) they can find which ramps need to be fixed, the cost estimate to fix it and actually use the data they collect to draw the new ramp,” Yates said.

The actual process of using the app through the perspective of the user is relatively simple.

Awasthi said the user would need to take around 12 pictures of a sidewalk at different angles and upload those into the app. Then the app will output the measurements and a 3D model of the curb ramp. From this, DeepWalk will create a compiled report of the data found that can be used by all the parties involved in fixing the ramps.

Despite the advances DeepWalk has made in simplifying the auditing process, there were some hurdles the startup faced in the early days of the company.

Berg said one of the biggest issues the company faced was understanding the need in the marketplace for their product.

Yates’s advice for startups facing this issue is to not just make something, but to fix a problem by understanding the needs of the people who will be using the product.

“When we first looked into the assessment of sidewalks and saw it took Champaign two years to complete, we thought we will just make the process faster,” Yates said. “What we discovered by these interviews with the people who would buy the product is that we can really do something useful and go beyond what is being done already to address needs.”

Recently, DeepWalk won third place in the startup competition Cozad and received $7,500 to put into the company’s growth. Awasthi said the money will go toward traveling to and working with cities in a trial run of the product and developing a more intuitive mobile application.

Currently, DeepWalk has decided to focus on community outreach and will be attending the Americans with Disabilities Act National Symposium in Texas over the summer to meet with ADA directors, disabilities rights groups and city engineers to better understand their market and get feedback on the functionality of the app.

Although the goal for DeepWalk as a company is to generate revenue by the summer of 2020, Yates said the main function of DeepWalk is to find creative solutions to an everyday issue.

Yates said he wouldn’t call himself a CEO until he can pay his employees. He prefers people to think of DeepWalk as a group trying to solve a problem.

“There are lots of sidewalks and curb ramps that don’t fit the ADA requirements and because of that, there are millions of people with disabilities who can’t get where they need to go,” Awasthi said. “This is an important issue and if I can do something about it then I should.”