An overview of racist, anti-Semitic incidents on campus 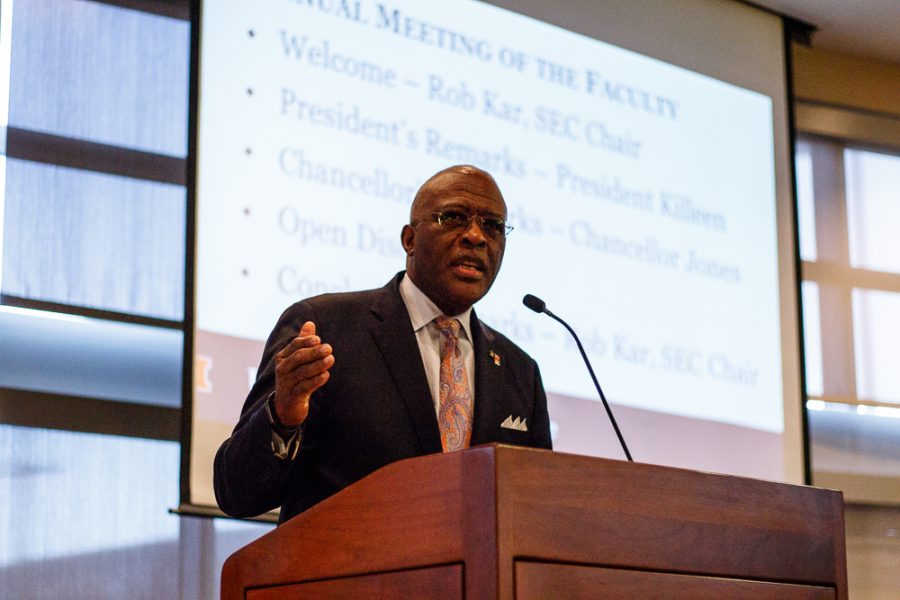 Chancellor Robert Jones responds to students’ concerns at the Annual Faculty Meeting on Monday. Jones also addressed the recent incidents of hate found around campus, including the noose found in Allen Residence Hall and drawings of swastikas.

On Sept. 1, a noose was found in the elevator of Allen Hall, 1005 W. Gregory Drive. An arrest was made the following day, Sept. 2, and a Massmail briefing the incident was sent on Sept. 5.

On Oct. 7, a swastika was found in the Foreign Language Building, 707 S. Mathews Ave.

A Massmail was sent on Oct. 9 addressing this incident as well as a presentation given at a University Housing staff meeting that he said raised a concern with anti-Semitic content. A combined senate and annual faculty meeting also addressed these incidents.

At the meeting, a professor in LAS, Bruce Rosenstock, was concerned that Jones calling the presentation anti-Semitic was problematic and pushing the chancellor’s own definition of anti-Semitism, even though there is no legal definition in the state of Illinois. Jones responded in saying that the content of the presentation was then taken out of context.

No Massmail regarding these incidents was sent, however, Jones addressed all “swastika incidents” together at the annual faculty meeting.

In addition to these Massmails, the University of Illinois Police Department released two statements throughout the semester. One regarding the noose and the other regarding the investigation into the four swastikas.

The second email from UIPD regarding the offensive graffiti stated that although these incidents have been reported recently, it is unknown when the damage occurred; therefore, at this time there is no reason to believe these incidents are related.