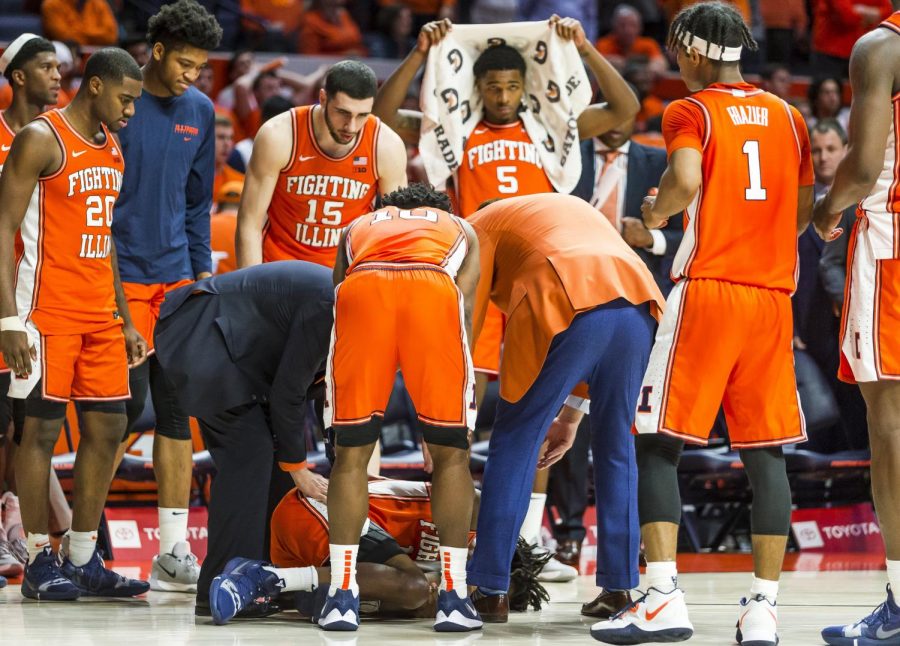 Sophomore guard Ayo Dosunmu (11) is attended to by coaches as the Illini bench looks on late during the second half at State Farm Center on Tuesday. Dosunmu went down after his knee buckled while driving toward the basket on the final play as the Illini lost to the Michigan State Spartans 70-69.

An MRI scan revealed no structural damage to sophomore guard Ayo Dosunmu’s left leg following the final play of No. 22 Illinois’ game against Michigan State Tuesday night, Illinois Athletics announced Wednesday afternoon. Donsunmu went down on the team’s last possession and carried off the court after the Illini lost 70-69.

“What happened with Ayo last night is as difficult a situation as you’ll see a young man go through, and a feeling where the outcome of the game goes from primary to secondary in a split second,” said head coach Brad Underwood, per Illinois Athletics. “We received positive news today from the MRI scan. Our medical staff will work with him around the clock on treatment and recovery. Ayo and his family have been overwhelmed by the outpouring of support from Illini Nation and college basketball fans everywhere.”