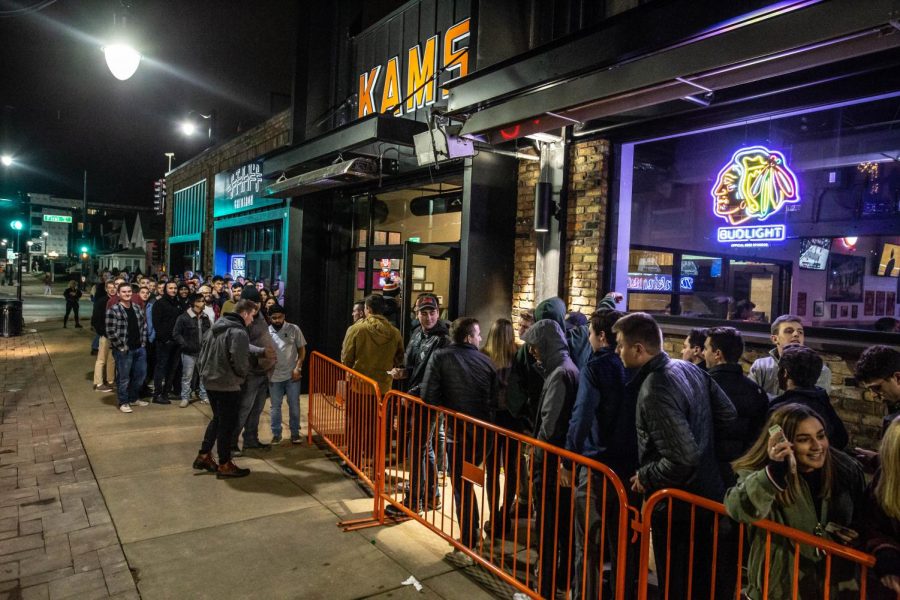 Patrons stand outside KAM’s on Jan. 29 for opening night. A GroupMe chat of KAM’s employees caused controversy across campus. KAM’s responded Wednesday stating that an employee in the chat was fired.

The post, made by Brianna Ghanbari, junior in AHS, stated in the tweet, “coming from a person who used to work at kams, i can’t believe how incredibly racist they are wow.”

Ghanbari worked at KAM’s last year but said she never turned in her availability for the new school year and was simply never scheduled again. Not having officially quit or been fired, Ghanbari was still in group chats with some of the other employees.

The rest of the Twitter thread showed screenshots of messages on a GroupMe where some employees were talking about Hispanic students at the bar.

“It just made me really angry,” Ghanbari said. “I knew I wanted to show people what he was saying because I have a bunch of friends that go there, especially since they just go there, and it’s just like little do they know what all these people are thinking of them.”

Ghanbari posted three screenshots of the GroupMe, starting with a message stating “the Mexican Geeds have discovered Block.” The responding messages revolved around getting the bar to “stock up” on Modelos.

According to Urban Dictionary, “geed” is a term used to refer to anyone who is not affiliated with Greek life on campus.

Ghanbari said she thought about whether or not to leave the names in the screenshots but ultimately left them in. She has since been kicked out of the GroupMe and has not had any interaction with the people in the GroupMe.

“I didn’t do it to ruin their life or anything, and I know a lot of people are really upset so they’re posting a lot of mean things about them,” she said. “But it’s definitely going to be a learning lesson for them.”

Other members of the GroupMe included in the screenshots did not respond in time for publication.

With over 100 retweets and almost 600 likes, Ghanbari’s tweet has received a lot of attention. Other students have also responded to a Facebook event, titled, “Kams Protest (Stand Outside),” created by Alexander Correa, sophomore in Media.

At the time of publication, the event showed 71 people interested and 22 people as “going.”

“I decided to come up with the event because I am tired of minorities constantly suffering from racism,” Correa said in an email. “The targeted audience in this case were Mexicans, and even though I am Puerto Rican, I will stand with them and any other minority to the day I die. We need to have a voice, and I will always stand up and be that voice if necessary. As a member of a Latino community I refuse to let racism go unacknowledged.”

Ghanbari explained there are basically two sides of the issue now; some want to continue going to the bar and show they do belong there and can’t be driven out, but then there’s the other side that no longer wants to give KAM’s their money.

“I’m on the fence between that,” she said. “But at this point, I don’t even want to think about going to KAM’s until I see something from the employees and KAM’s themselves.”

According to Cochrane Premier Properties on Tuesday, KAM’s owner Scott Cochrane was out of town and unavailable for comment.

However, KAM’s posted on their Instagram Wednesday afternoon that “KAMS has taken action to terminate this employee as his statements in no way represent KAMS views of the solidarity of the university community as one regardless of race, color, or creed.”

According to the post, KAM’s had no knowledge of the group chat containing these remarks and that the business apologizes for the remarks.

“… Such remarks will not be tolerated in or as part of, even if falsely attributed to, its business,” the post read.