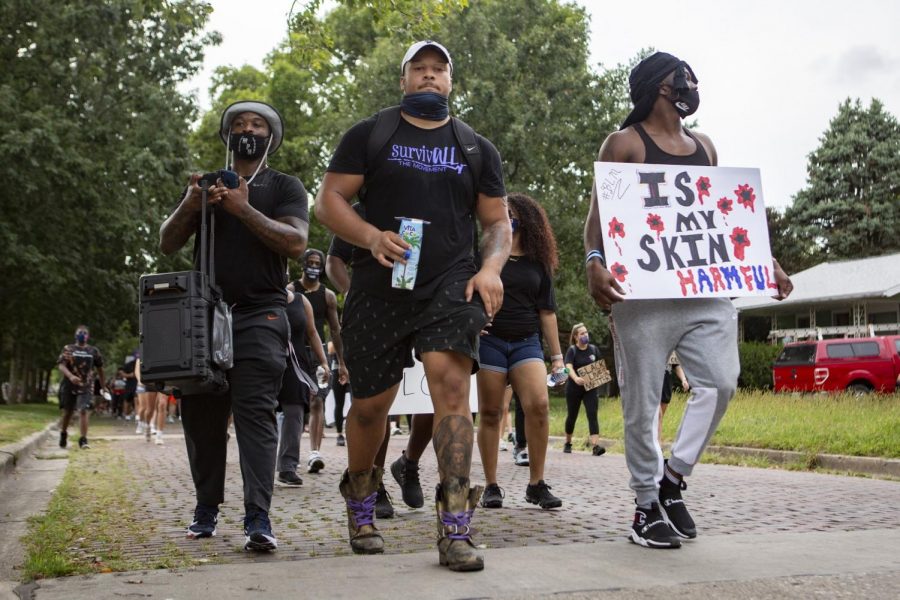 When Illinois senior defensive back Nate Hobbs stepped up on a stone bench to address a crowd of hundreds of protestors in front of the Champaign Police Department, his message was clear. Unity. Noting there were people of every race represented in the athlete-led protest in Champaign on Monday evening, he declared that unity could stop systemic racism.

Hobbs was surrounded by not only the Illini football team, who spurred the protest, but representatives from multiple different sports teams on campus, students from the University and Champaign community members.

“I don’t care what anybody says,” Hobbs said. “Love will always be stronger than hatred. And this right here is love, on my momma.”

Hobbs’ address outside of the CPD was only a small part of the day’s events that started just before 4 p.m. at Grange Grove with the backdrop of Memorial Stadium. The protest left from Grange Grove and went northbound on First Street to the CPD building where there was a prayer, a kneeling moment of silence for Black people who have died due to police brutality and speeches from protesters. After that, the demonstration headed east on Park Street, turned south on Fourth Street and continued until reaching the northeast parking lot of State Farm Center.

Illini junior offensive lineman Kendrick Green was the first person to post the protest flyer on Twitter and was the vocal leader of the protest, contacting both head coach Lovie Smith and the CPD to work out the demonstration ahead of time.

It wasn’t long after Green posted the photo that the entire Illinois Athletic community showed up to support him on social media. Retweets and likes came from all areas of Illini athletics, making it clear that while the protest was student-athlete led, there was support on all levels.

“Social media is a powerful thing,” Green said about the outpour of support.

At around 3:30 p.m., when the protest was about to begin, Green addressed the media.

“My teammates and I, we kind of talked in the group chat about it,” Green said. “We saw other schools doing it like the University of Nebraska and the University of Tennessee, the football players there do it. We thought it’d be a great idea. We’d be getting ready for meetings and practice right now, so today we’re going to step out here and give the community the opportunity to come together.”

Green saw the day as an opportunity to raise awareness for the team’s cause and to support the Black Lives Matter Movement. He wants to use his platform to do something important and meaningful, which is what stemmed the protest.

Green also talked about what was next after the protest, and the things coach Smith said to the team about further action. Smith told his team protesting is one thing they could do, but voting is something that is also very important as the 2020 election nears.

The plan is to do something with the entire team about voting. Whether that is a team registration like some teams in the NBA have done or if it is just raising awareness about voting is unclear right now. One thing is clear, though: The 21-year-old Green will be using his right to vote for the first time this year.

“I never realized the importance of being able to vote in our country until coach Smith really sat down and broke it down to us,” Green said. “All this protesting is cool, but if you’re out here, are you voting? That’ll make a real difference … I’m making sure me and all my teammates will do it. We need to get out and vote.”

After addressing the media, Green and his teammates led the protest down First Street to the CPD building. The protest alternated from popular protest music to chants that this country has heard all year. Lil Baby lyrics like, “It’s bigger than Black and white, it’s a problem with the whole way of life” were exchanged with calls and responses like, “No justice, no peace” as they marched through Champaign.

It is only Rayanna Hurt’s and Gabe Lareau’s second week of their freshman year, so seeing the athletic department make a stand for Black lives might have been unexpected. Hurt was pleased to see this, though.

“I think it is really important,” Hurt said. “Because often, in a lot of schools, people look at athletic programs and they’re often the people that stand back and sit back and they don’t speak up for their athletes. I think it’s important that since we have such a big program, that they are showing their support because it clearly affects many of the athletes and students here.”

Hurt’s desire to protest is fueled by her Black family. Hurt is part Black but views her Blackness as perceived as less-threatening to police officers than the Blackness of her family members. She says she protests for her father, aunt and her 3-year-old brother.

Lareau came to the protest because he feels he needs to stand up for the injustices that Black people have faced and still face in the country. He is glad to see the athletic department is using its resources to push forward the messages of their student-athletes.

“I just want people to know that we need to demand big structural systemic change to this injustice,” Lareau said. “Going to a protest is fine, that’s a great first step. But, we have to contact our representatives and we have to speak out after we’re done marching so we can enact big structural systematic change for the whole country and not just Champaign-Urbana.”

As the protest reached the CPD building, the marchers filed into the street just west of the intersection of Park and First streets. The leaders of the protest called everyone in to kneel and join them in a prayer led by Jason Epperson, a pastor from C-U Church.

After the prayer and the moment of silence for the victims of police brutality, the football players spoke out to the crowd. Speakers included Hobbs, senior Kendall Smith, senior Milo Eifler and community members from C-U who shared their experiences with law enforcement.

“The most important thing is that we are all here together,” Smith said. “I appreciate you guys, who are not Black, who are here, who are supporting us, who are helping fight because that’s when the change is gonna happen. We can be all Black and protest until we’re blue in the face but nothing is going to happen. So, I think it is very courageous of you guys, I appreciate it. Everybody’s background is different. It is not an easy thing to do, but it is the right thing to do and I appreciate that greatly.”

The protest ended by marching to State Farm Center where Green addressed everyone, thanking them for coming. And while the impact of Monday’s protest will not be known immediately, the day’s goal could be summed up in the words that Eifler used while standing in front of the CPD building.

“We are a group of Black athletes who came together amid the police brutality going on in our country, fueled by the murders of George Floyd and Breonna Taylor and many more,” Eifler said. “We are driven by a shared understanding that our influence and prominence, particularly among young people, is a responsibility to continue the tradition of Black athletes working together to fight for justice and equality.

“We are not politicians or policy leaders, and we are not trying to be. As individuals, we may choose to talk about specific policies and candidates, but as a team, we came together to focus on one issue this year, police brutality and systemic racism on Black people. We see you in the streets. We see your social media posts, your voices are breaking through. But, it’s time to do more. We know you have the ability to organize, so join us and take your protest to the election, and fight to keep our community from being silenced.”