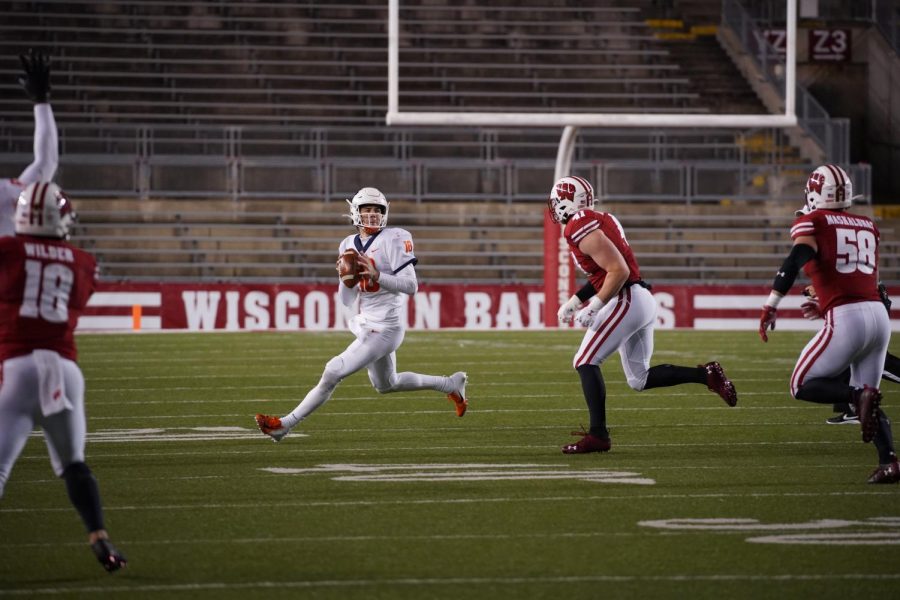 Quarterback Brandon Peters faces pressure from the Wisconsin defense in the first game of the season Friday night. The Illini lost to the Badgers 45-7.

The Illinois football team announced Saturday morning quarterback Brandon Peters and tight end Griffin Moore have tested positive for COVID-19. The announcement came just over an hour before the Illini are set to kickoff against Purdue at Memorial Stadium.

Several other players are also out for today’s game due to contact tracing. However, it was not made clear which inactives are out due to injuries and which are out due to contact tracing. This list of inactive players also includes Christian Bobak, Shammond Cooper, Brevyn Jones, Kerby Joseph, Doug Kramer, Michael Marchese, James McCourt, Moses Okpala, Keith Randolph, Trevon Sidney and Jordyn Slaughter.

According to the Big Ten’s protocols, Peters and Moore will be out for 21 days and will return, at the earliest, for the Nebraska game on Nov. 21. The other inactive players that are out due to contact tracing will be out until the Minnesota game on Nov. 7.

Illinois’ week one opponent, Wisconsin, had several positive COVID-19 tests just a couple of days after the Illini played the Badgers in Madison. Quarterback Graham Mertz was one of the first players to test positive for the Badgers.