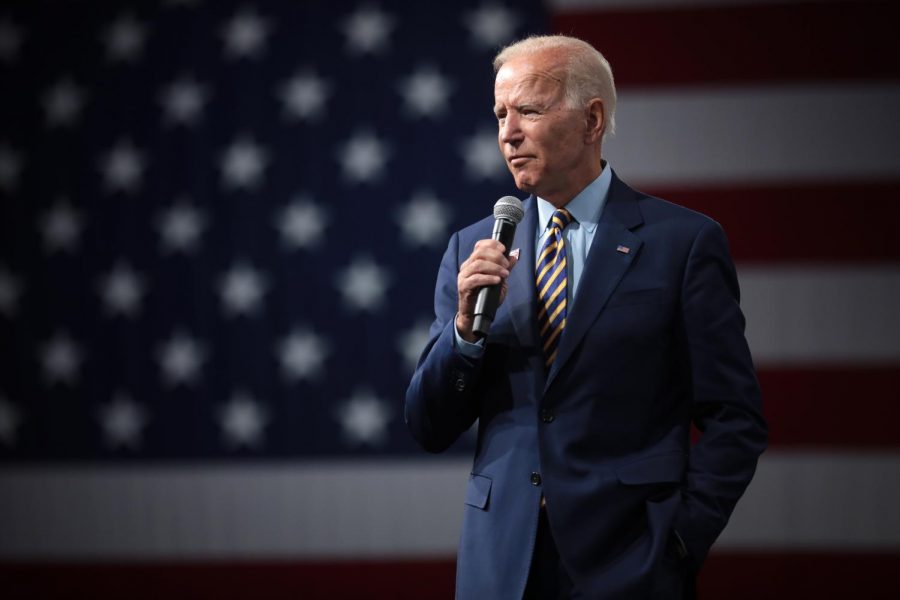 Former Vice President Joe Biden speaks with attendees at the Presidential Gun Sense Forum at the Iowa Events Center in Des Moines, Iowa on Aug. 10, 2019. Biden has won the 2020 presidential race, making him the 46th president of the United States.

Former Vice President and Democratic nominee Joe Biden has earned enough electoral votes to make him the 46th president of the United States.

After four long days spent waiting on results, Biden took the lead in Pennsylvania this morning, putting him at 273 electoral votes, just three votes more than the 270 needed to win. Shortly after, the Associated Press called Nevada, leaving Biden with 279 electoral votes.

“I am honored and humbled by the trust the American people have placed in me and in Vice President-elect Harris,” Biden said in a statement. “In the face of unprecedented obstacles, a record number of Americans voted. Proving once again, that democracy beats deep in the heart of America.”

Biden’s presidency sets several historic milestones. Not only has he received more votes than any presidential candidate in U.S. history, Vice President-elect Kamala Harris will be the first woman and first Black or Asian American person to serve in her position.

“This election is about so much more than (Joe Biden) or me,” Harris said in a tweet Saturday morning. “It’s about the soul of America and our willingness to fight for it. We have a lot of work ahead of us. Let’s get started.”

Currently, races in Alaska, Arizona, Georgia and North Carolina have yet to be called by most election analysts and news organizations.

As of Friday, another 3,022 mail-in ballots had been tabulated by the Champaign County Clerk’s Office after Election Day, bringing the county to its all-time record of 95,515 votes in a single election. Almost 75% of Champaign County’s registered voters showed up to the polls.

New votes have given some breathing room for leading candidates in uncalled county races. Incumbent Coroner Duane Northrup holds a 1,969 vote lead over challenger Chaundra Bishop, and Democrat Mike Ingram holds a 2,923 vote lead for Recorder of Deeds, a position which he vows to eliminate if elected.

With 98% of precincts reporting as of Wednesday morning, 55% of voters voted “No” to change the current flat tax rate of 4.95%.

Even with outstanding mail-in ballots, the 55% to 45% in favor is too wide of a margin to overcome. The amendment needed 60% approval in order to pass.

“Illinois is in a massive budget crisis … a crisis that was only made worse by the coronavirus pandemic,” Vote Yes For Fairness Chairman Quentin Fulks said in a press release on Wednesday morning. “Fair Tax opponents must answer for whatever comes next.”

Vote Yes for Fairness is a committee dedicated to educating Illinois voters about the graduated income tax system funded personally by Gov. Pritzker.

Gov. Pritzker has pushed for the constitutional amendment since 2019. In his daily coronavirus briefing on Nov. 3, he said “options for Illinois without the fair tax are not good.”

Supporters of the tax amendment have said the change is a way to address the financial imbalance in the state. Opponents have said that there is no guarantee that high tax brackets for the wealthy would affect lower-income individuals.

Matt Paprocki, president of Illinois Policy, said in a press release Wednesday morning, “Illinoisans made their voices heard and sent a clear message to Illinois politicians: ‘We want to keep our constitutional flat-tax protection.’”

Paprocki said voters recognized how the progressive tax policy would hurt citizens on all levels.

The Illinois Constitution will keep the current flat tax rate, regardless of income differences.

“We are undoubtedly disappointed with this result but are proud of the millions of Illinoisans who cast their ballots in support of tax fairness in this election,” Fulks said.

Thirty-two other states in the U.S. have some form of a progressive income tax. Illinois is one of eight states in the country that has a flat tax.