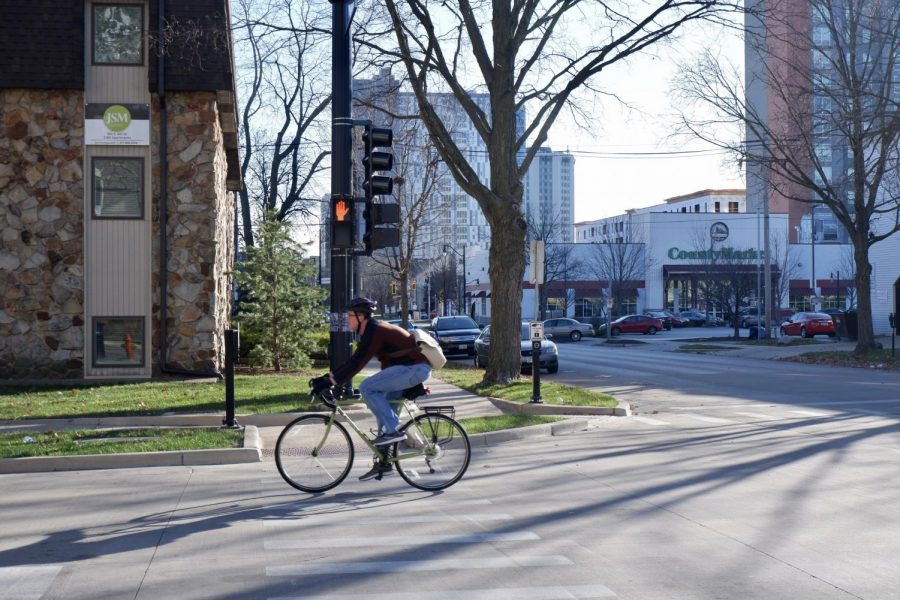 A student bikes East on White street on Tuesday morning.

Walking around campus, the shiny bicycle racks standing outside most buildings are integrated into the scenery. Bikes are stacked handle-to-handle with a number of different locks securing them throughout the day at some racks. They come in a variety of colors and styles. One can hear the occasional clicking of the bike chain skipping over the teeth as people ride by.

Campus bike racks are just one resource that the University has to promote a healthy bicycle culture on campus.

A bike center with a variety of educational programs, a new national bicycle registration system and a campus-wide bike-share program all contribute to the atmosphere on campus.

“Good (bike) culture is indicative of a healthy environment, a healthy and engaged student population that is interested in maintaining their health, and interested in self-sufficiency,” said Jacob Benjamin, manager and mechanic at the Campus Bike Center.

There are an estimated ten thousand bikes on campus, with as many as five thousand actively being used during peak hours, according to the 2018 University bike census.

Joseph Choi, a sophomore in Grainger, enjoys biking to and from class and is encouraged by the fact that there are many programs to support this mode of transportation.

“I like to dictate exactly where I want to go, unlike riding a bus,” Choi said.

Also available to students is the campus bike share program, VeoRide. First implemented in 2017, the program provides five hundred turquoise bicycles scattered throughout campus that can be activated through an app.

These colored bikes are routinely found lying on the sides of sidewalks, propped against academic buildings, and in one instance, in a tree at Ikenberry Commons.

For Grainger freshman Isabella Palm, the public bikes are convenient and she regularly uses them once a week for class.

“It’s really nice, actually,” she said. “I didn’t want to take the bus because the bus routes didn’t always work out.”

Sarthak Prasad, Sustainable Transport Assistant at University Facilities and Services, said that this system was chosen since it would benefit students even after they graduated.

“If they register their bicycles here, they’re here for four years then they’re gone,” he said. “If their bicycle is registered in the national system their bicycle will be protected wherever they go.”

With nearly 1.5 million bikes registered in the United States and Canada, Project 529 ensures that bicycle owners will have protection wherever they are, Prasad said.

University Facilities and Services is interested in promoting sustainable transportation methods and biking is one example.

“It’s a healthier lifestyle and we want our students to choose bicycling as a more sustainable, healthier and safer option,” Prasad said.

Located on Gregory Drive, the Campus Bike Center is another resource whose goal is to educate bicycle-users and provide learning opportunities. They operate through the non-profit organization, The Bike Project of Urbana, and can teach students how to do quick repairs as well as build a bicycle from scratch with the spare parts they have available at their garage.

“Teaching people how they can do that themselves will definitely help, and that’s even more important now during a pandemic,” Benjamin said. “Learning more hands-on things is always good.”

In a normal year, people could come into the center to buy a bike built by the student volunteer mechanics or attend classes on specific repairs. With the pandemic, the business has been tough but Benjamin said “we’ll get through it.”

Services are still available, just through appointment or virtually. But as a result of the shutdowns, Benjamin said, air quality improved as a result of people traveling less.

“Riding a bicycle is a pretty great resource and way to reduce your carbon footprint. Something like 70% of our current greenhouse gases are coming from transportation,” he said.

Benjamin also said that on a small-contained and relatively flat campus, bicycle culture can vastly impact the student body as well as the environment.

“Having a good culture and having it be a welcoming and approachable endeavor is really important to helping this campus, community and planet.”