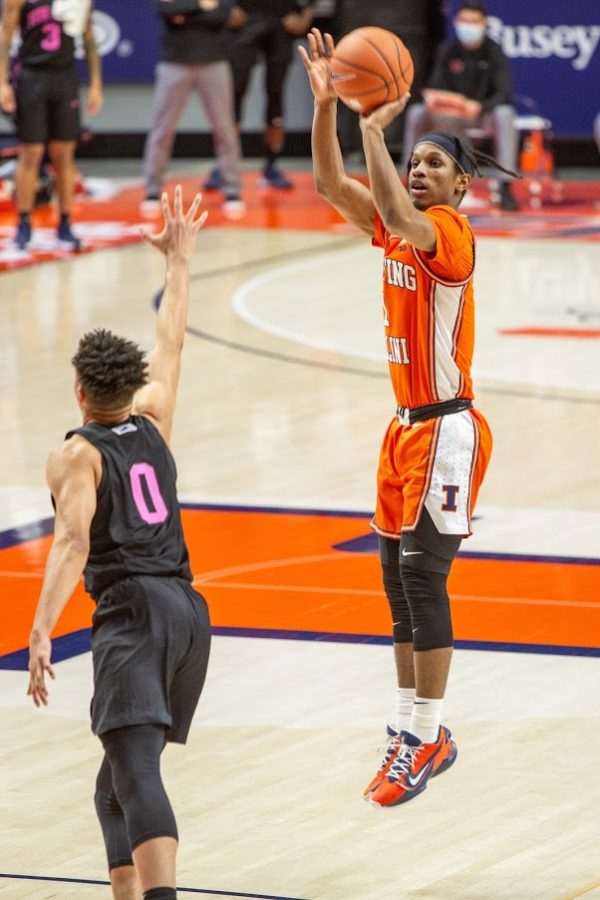 Senior Trent Frazier shoots a three during the game against Penn State on Tuesday. The Illini won the game 79-65.

The Illini bounced back smoothly against Penn State on Tuesday night after two disappointing losses to Maryland and Ohio State. With a lineup change at the four position, dominant scoring from sophomore center Kofi Cockburn and consistent shooting from senior guard Trent Frazier, the Illini looked like a re-energized team who could put together a full 40-minute performance.

Head coach Brad Underwood utilized his deep roster a little more than usual in the win which helped the team stay energetic and focused throughout the game as they never trailed the Nittany Lions. Let’s take a look at the performances of the top nine Illini on Tuesday night.

It’s been made very clear, especially by Brad Underwood, that Dosunmu doesn’t need to score 20-plus points in a game to be an impact. Dosunmu was off from deep against Penn State, missing all four of his attempted three-pointers, but he still finished with 13 points off six makes.

Dosunmu had his second-straight game with five assists as he’s continued to prove why he’s one of the best guards in the country off the ball as well. The Illini guard also played strong defense on Izaiah Brockington who scored just six points compared to his usual 14.8 per game.

While everyone wants to see Dosunmu make crazy transition buckets or game-winners, his consistency with the little things this season has highlighted his leadership ability — and he’s still averaging over 20 points per game.

After struggling to get shots to fall at the start of Big Ten play, Miller has found his rhythm from deep again as he is averaging 11.2 points per game in the last five contests. Against Penn State, Miller went 3-for-7 from three-point range, finishing with nine points.

Miller once again showcased his abilities on defense with strong closeouts on Penn State’s shooters and tight positioning that forced the Nittany Lions into some tough shots. Miller also grabbed four defensive rebounds on Tuesday night.

The Illini freshman has continued to look like a seasoned collegiate player, not because of shot, but because of his discipline and energy that look to be improving every game. A little more consistency on his deep balls and creating his own shots down low and Miller will be quite the force to be reckoned with.

The Illini senior had one of his best games this season against the Nittany Lions, putting up 13 points on 43% shooting from behind the arc. After not scoring against Ohio State where he was coming off a shoulder injury, Frazier looked much more comfortable and confident with his shot Tuesday night.

He was also stronger on the defensive end, grabbing three rebounds and three steals, a couple of which he looked like a defensive back intercepting some tough passes. Frazier continues to play some of the best defense in the Big Ten, almost never losing his man while making it very difficult for his opponent to put up an easy shot.

When Frazier is hot and confident on both ends of the court, the Illini become more of an elite team that looks like it could make a run come March.

After a couple of lackadaisical starts from the Illini lately, Brad Underwood knew it was time to make a change to the starting lineup and Grandison was the answer. The junior made his first start as an Illini, taking Williams’ position at the four. From the jump, Grandison showed the effort Underwood was looking for, getting active on the boards and upping the intensity on defense.

Although finishing with just three points, Grandison made his mark off the ball, with four rebounds, including two offensive boards, three assists and a steal. And Grandison played just seven second-half minutes as he injured his shoulder late in the game.

With Tuesday’s performance, it’s likely Grandison will stay in the starting lineup for Illinois’ next matchup against Iowa which will certainly be the forward’s biggest challenge yet.

Night in and night out Cockburn puts up impressive double-doubles, but Tuesday night’s performance was a different level of dominance. From start to finish, Cockburn controlled the paint, finishing with 21 points and 12 rebounds, securing his 11th double-double of the season as he leads the NCAA.

Over the last five games, Cockburn is shooting 80% from the field (36-45) and he leads the Big Ten in field goal percentage during conference games with 72.7%. More impressively, Cockburn went 9-13 from the free-throw line after struggling against Ohio State.

And while Cockburn’s offense kept the Illini’s lead comfortable throughout the game, his defense contributed to several scoring droughts from Penn State. He also recorded a season-high four blocks, including a couple of volleyball-like spikes into the stands during the second half.

For the first time this season, Williams came off the bench as Grandison made his way into the starting lineup instead. However, Underwood emphasized after the game the move had nothing to do with Williams’ ability to be a starter as he still saw significant court time against Penn State.

While Williams didn’t attempt any shots on Tuesday he made three of his four free-throw attempts. His bigger contributions came on the defensive end, grabbing five rebounds and two steals and while recording one block. It’ll be interesting to see how Willaims continues to respond to coming off the bench and if he can continue knocking down threes for the Illini.

Bezhanishvili didn’t have a big night by any means, but he did his job well, scoring six points on a perfect 2-2 from field goal range and hitting both free throw attempts.

He has still been a little too quiet when it comes to defense, grabbing just seven total rebounds after the last five games. Cockburn has been playing well and limiting his fouls lately, which leads to less time on the floor for Bezhanishvili, but there could still be some improvements on the boards for the junior.

Curbelo had another quiet night in terms of scoring, putting up six points and going 3-7 from the field. But, Curbelo turned his flashy passing on once again which resulted in four assists for the freshman, most notably a behind the back pass to Dosunmu for an easy layup.

However, Curbelo is still making some avoidable mistakes, often getting a little too fancy with his passes or drives that result in turnovers. The freshman had a team-high three turnovers on Tuesday and lacked some ball control while trying to drive to the hoop.

The third Illini freshman really showed what he’s capable of against Penn State, finishing with five points and a career-high three blocks. Even though he got hit with a technical foul following one of his blocks for trash-talking a Penn State player, Underwood said he loved the energy and emotion from Hawkins.

Underwood also praised Hawkins for his improvements and told the media there’s a lot more to see from his talented freshman. During the last couple games, Hawkins has earned more minutes and it’s showing in his increased comfortableness on the court and confidence in his ability to produce on offense. One of his weak spots, however, are his closeouts, which led to a couple threes from Penn State on Tuesday.