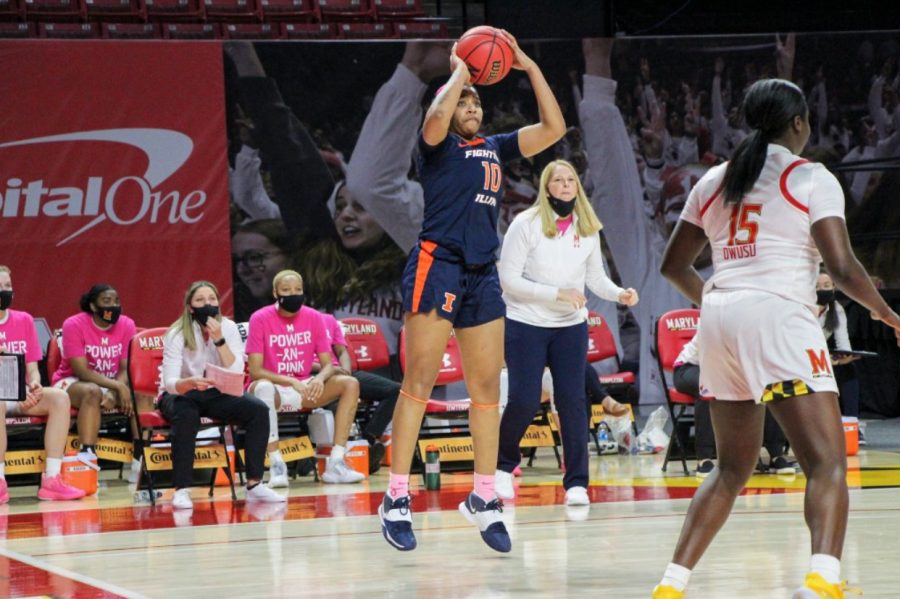 Sophomore Jeanae Terry shoots the ball during the game against Maryland on Feb. 17. The Illinois women’s basketball team will face Northwestern on Wednesday at State Farm Center

The Illini women’s basketball team has struggled as of late, losing their last two games by a combined 74 points. Illinois has a tough matchup ahead of them against in-state rival Northwestern, and recency does not favor Illinois.

“There’s in-state pride right now, but our job is to make this a better rivalry,” said head coach Nancy Fahey. “Since we’ve been here, we’ve competed with these guys, but we need to change that to a true rivalry.”

The Illini have already faced the Wildcats this year, and the Illini lost by 19 points. Northwestern took an early lead, but a third-quarter run brought Illinois back in the game.

Unfortunately for the Illini, senior Wildcat guard Lindsey Pulliam caught fire and put the game away. Pulliam finished with a season-high 28 points and is one of the main priorities this time around.

“(Pulliam) got all her points off of our mistakes. We didn’t box her out. She got second-chance points. She got little points in the paint that we could have stopped,” said sophomore guard Jada Peebles. “She’s going to make shots obviously; she’s a great player. It’s just the little things, boxing her out, keeping her off the boards and just making sure we know where she’s at all the time.”

Pulliam isn’t the only Wildcat that the Illini have to worry about. Northwestern plays four guards, and three of them score in double figures. Junior guard Veronica Burton leads the team with 16.5 points per game while also shooting a team-high 35% from three. Burton’s perimeter scoring has been vital for a Northwestern squad that shoots just 27% from deep.

Defensively is where Northwestern thrives. They utilize a full-court press, something the Illini faced in their last two games against Maryland and Rutgers. However, the Northwestern defense looks a little different than the others.

“Northwestern has a similar style (to Maryland and Rutgers), but it’s a little different in the way they apply it,” Fahey said. “(Northwestern’s) press at times you can turn the ball over, but it’s more that it’s taking time off the clock to go up against their blitzer defense.”

Though the Northwestern defense is designed to shorten the clock and force teams into bad shots, they thrive on forcing turnovers. Northwestern has forced their opponents into 21.8 turnovers a game while giving the ball up just 11.5 times. Additionally, the Illini gave up the ball 22 times in their first game against Northwestern and have averaged 25 turnovers in their last two games.

Keeping the game clean is important, and so is scoring for an Illini team that desperately needs to find some consistency offensively. Peebles and freshman guard Aaliyah Nye are the only players to break double-digit scoring in their last two outings, and the Illini have not broken 60 in that span.

It will be crucial for sophomore forward Kennedi Myles and sophomore guard Jeanae Terry to step up. Luckily for Illinois, they know that the second-year duo can score, but they need extra from them. If the Illini are going to pull off an upset, they will likely have to score in the 70s, something they have only done three times all season.