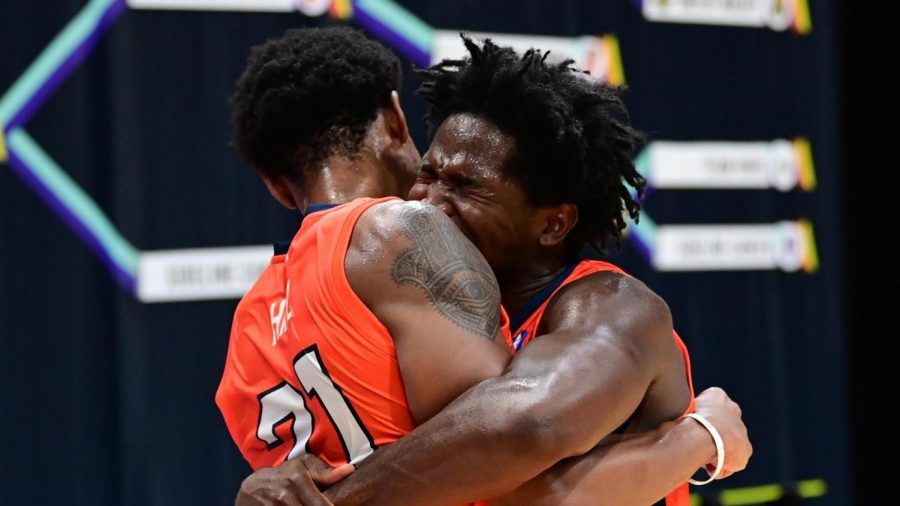 Teammates from the House of ‘Paign hug after taking down the number one seed July 9, 2020. Several alumni from Illinois will be coming back to play for House of ‘Paign.

Basketball has always ended in May or June every year since the merger of the NBA and ABA in 1976. This trend came to an end, though, when the COVID-19 pandemic pushed back two of the NBA seasons and forced a NBA finals in July. This is not the only basketball event happening this summer, as Illinois and Bradley are hosting the Illinois regional for the annual The Basketball Tournament, which gives alumni teams the chance to win the $1 million grand prize. The regional will feature 16 teams and will run from July 24 to 28.

Following three other regionals — Ohio, Kansas and West Virginia — the championship round will be held in Dayton, Ohio and will consist of two teams from each 16-team regional.

House of ‘Paign features several Illinois alumni, including Andres Felix, Kipper Nichols, Brandon Paul, Leron Black, Rayvonte Rice, Demetri McCamey and Nnanna Egwu, though the 10-man roster will include other names like Mike Daum and Juice Thompson. This team, like many other regional teams, will have a chance to win all under very steep circumstances.

In 2020, Feliz was the breakout star who shone brightest in last year’s tournament, giving him a good representation from TBT fans and coaches. No. 2 seed House of ‘Paign will begin its tournament campaign on Saturday at 1 p.m. at the Peoria Civic Center against No. 15 Jackson TN UnderDawgs.

This tournament reflects how alumni still have — always will — love the game of basketball and their alma maters. This tournament is filled with skilled and accomplished players and coaches on every roster. This year’s competition will include the 14 players who have NBA experience and 31 players who competed in the Big Ten.

Golden Eagles, which is the Marquette alumni team, is the defending champion. This tournament will have 14 games in seven sessions, with the final two teams from the region advancing to Ohio to compete for the national crown.