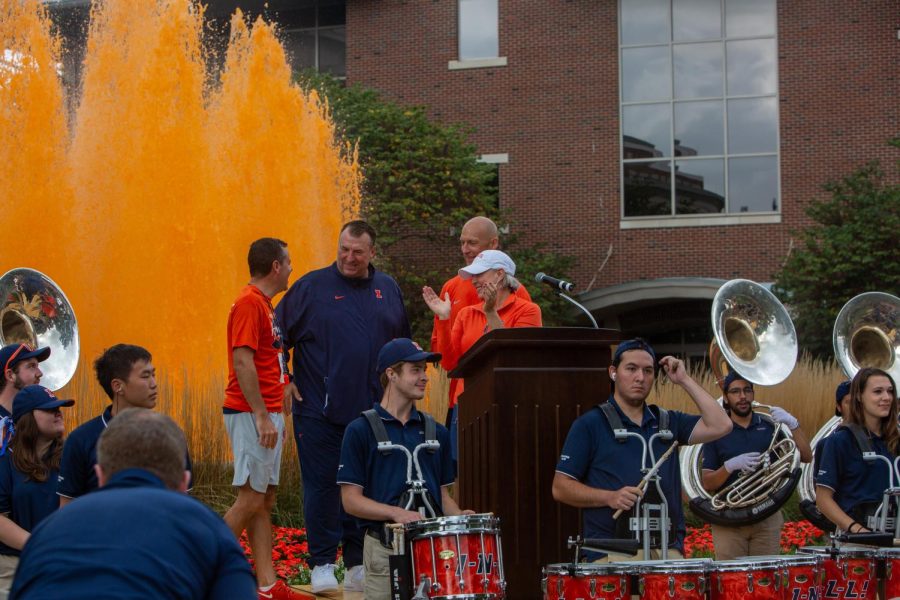 Marching Illini, Bret Bielema, and many more come together for the annual dyeing of the fountain as homecoming week starts. Community is Thursday’s theme for homecoming week and students are encouraged to come out to the town and participate in Thursday Night Live.

On Thursday, the University will be celebrating the local community with its first ever Thursday Night Live event in downtown Champaign. The event will feature live music, work by local artists and special deals at local businesses.

The event, which replicates the City of Champaign’s series of Friday Night Live events over the summer, is a collaboration between the Illinois Alumni Association and 40 North, the Champaign city arts council. Because the Homecoming theme for Thursday is community, explained Kelly White, executive director of 40 North, the Alumni Association reached out to 40 North to bring the homecoming celebration into the wider Champaign-Urbana community.

“What would be cool is if we could go downtown and have kind of like a Friday night live event,” White said. “So you know, having bands outside and things and different activities,”

White also elaborated on the welcoming atmosphere that she hopes the event will foster.

“The whole point of this is community, so I want a lot of the community to come,” White said. “I would love if current students would come down because it would be great to draw them to downtown and celebrate homecoming out with the community.”

Jennifer Dillavou, president of the University of Illinois Alumni Association, also expressed her intention to see this year’s homecoming emphasize the University’s ties to the Champaign-Urbana community.

“I think that the connection between Illinois and the Champaign-Urbana community has never been better,” Dillavou said. She also expressed an admiration for everybody who was involved in planning homecoming this year.

“(Homecoming) shouldn’t just be seen as an Alumni Association endeavor,” Dillavou said. “Everyone on the committee has played a role.”

The key feature of the event is the musical performances of bands 90’s Daughter and New Souls. 90’s Daughter will perform on Market and Taylor streets, outside of the Pour Brothers and Seven Saints.

New Souls will perform on Neil Street and Park Avenue. Both bands cover a broad range of musical styles, with a focus on 90’s and 80’s covers. White was confident of their ability to appeal to both the community and the campus for Homecoming Week.

“They both have proven track records of being very huge audience pleasers and big high entertainment which is what we wanted for this event,” White said.

Alongside the bands, which will be performing in one-hour sets, the Marching Illini is also going to be in the city for this event.

The live music, however, is only one part of the event. Local artist Scott Barber, known as “Scobar,” will be completing a chalk mural on the city street throughout the course of the event. Different establishments will host over 13 block I statues all over the city, decorated by local artists.

“From the few that I’ve gotten sneak peeks at, they’re going to be remarkable and very, very cool,” White said.

While aimed toward the entire campus community, White also expects Thursday Night Live to play a special role in welcoming alumni back to the campus, either to visit the city itself or in preparation for the homecoming game on Friday. She expressed her hopes that alumni visiting for other homecoming events would stop by to begin the celebration.

“A perfect introduction to homecoming festivities is to be able to come down here for this, and of course a lot of alums live locally, I’m an alum, so hopefully we’ll get some longtime alumni that will come down and not only enjoy live local music but celebrate Homecoming as well,” White said.