Homecoming 5K kicks off the week with healthy start 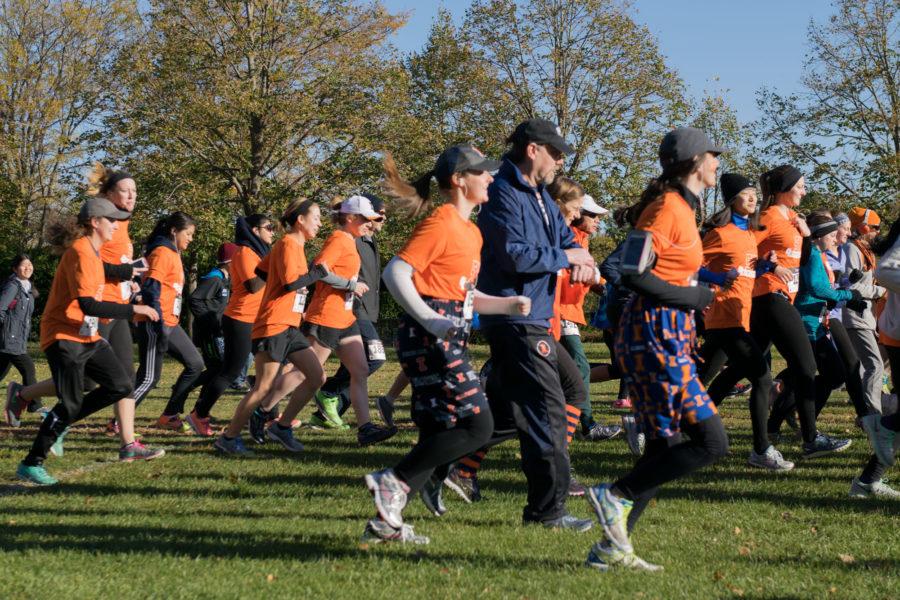 Students, faculty and community members briskly begin their run at the Homecoming 5K on Sunday morning.


This year’s Homecoming 5K is on track to surpass last year’s race with even more entertainment, food and fun, as Homecoming week kicks off to a rather healthy start.

“Everybody’s dressed in blue and orange, so even if you don’t like to run, it’s still a cool experience,” said Annalisa Roncone, codirector of the Homecoming 5K and sophomore in LAS. “Everybody’s very enthusiastic and helping out. It was a lot of fun.”

Roncone didn’t consider herself a long-distance runner, but she still found last year’s race to be a very rewarding experience. She ran alongside other students, alumni and members of the community who also attended the 5K.

Each runner paid a $20 fee to participate. This year, there was also the option to sign up as a group of four for $60.

Approximately 90 people showed up to last year’s race, amounting to almost $2,000 in proceeds. This year, the Student Alumni Association hoped to attract more people and exceed that number.

“We’re really trying to target (in addition to) students, community members. (We’re) putting it out on their running clubs, park districts — getting the word out,” Roncone said.

A portion of the proceeds from the event is used to buy t-shirts for participants, and the remainder is given to the Emergency Dean’s Fund. Angela Dimit, director of advancement for the Office of the Vice Chancellor for Student Affairs, assists with the effort to raise money for the fund.

“The Emergency Dean’s Fund provides limited emergency financial assistance to a small number of currently-enrolled University of Illinois students who are unable to meet immediate, essential expenses because of temporary hardship related to an emergency situation,” she said.

For example, the fund may provide monetary assistance to a student if there was a death in the family and the student has to fly home. Essentially, the fund will financially support students in the case of an unexpected emergency.

“I can’t think of a better way to support students in immediate need than through giving to this fund,” said Ken Ballom, dean of students and associate vice chancellor for student affairs.

The race commenced at around 9 a.m. Sunday morning, but participants showed up before that to enjoy the early entertainment and to get their t-shirts. No Comment, a student a cappella group, sang the national anthem and a jazzed-up version of the Illini Fight Song before the race, which is one of many newly-established traditions the Student Alumni Association hopes will continue in years to come.

“I loved how they started the race with the a cappella group performing,” said Julie Holdener, member of the Law School Running Club and participant at the Homecoming 5K. “(It) really set the tone.”

The racetrack was located at the Arboretum, on the corner of Florida and Lincoln avenues. Participants ran approximately two laps around the Arboretum.

The top three winners of the race don’t receive trophies or any prizes. However, Rory Johnson, codirector of the Homecoming 5K and sophomore in Education, said winners are offered somewhat of an alternative prize: bragging rights.

“We are basically just going to post the top three winners on our Facebook page,” Johnson said.

Prizes were, however, awarded to both the team and the individual with the best Illini Spirit. Most of the spirited participants made sure to showcase their orange and blue pride, but in layers as it was a fairly brisk morning.

“Great colors today — lots of orange and blue,” Holdener said. “It warmed up as we ran, so that was (also) nice.”

During the race, there were markers along the track to let the participants know how far they’ve run. Enthusiastic Student Alumni Association members, dressed in blue and orange, were stationed along the track cheering everybody on and even cracking a few jokes to keeping the whole experience light-hearted and fun.

“It was really great, the enthusiasm that the SAA and the other volunteers had,” Roncone said. “We’re just trying to get the Illini spirit going as soon as possible.”

After the race, hungry participants unwound with refreshments including Gatorade, water and bagels. There was also a photo booth with a backdrop highlighting the 5K, allowing racers to remember the great time they had running for a good cause.