A show of support from dad: Marching Illini and Illinettes perform tradition with fathers 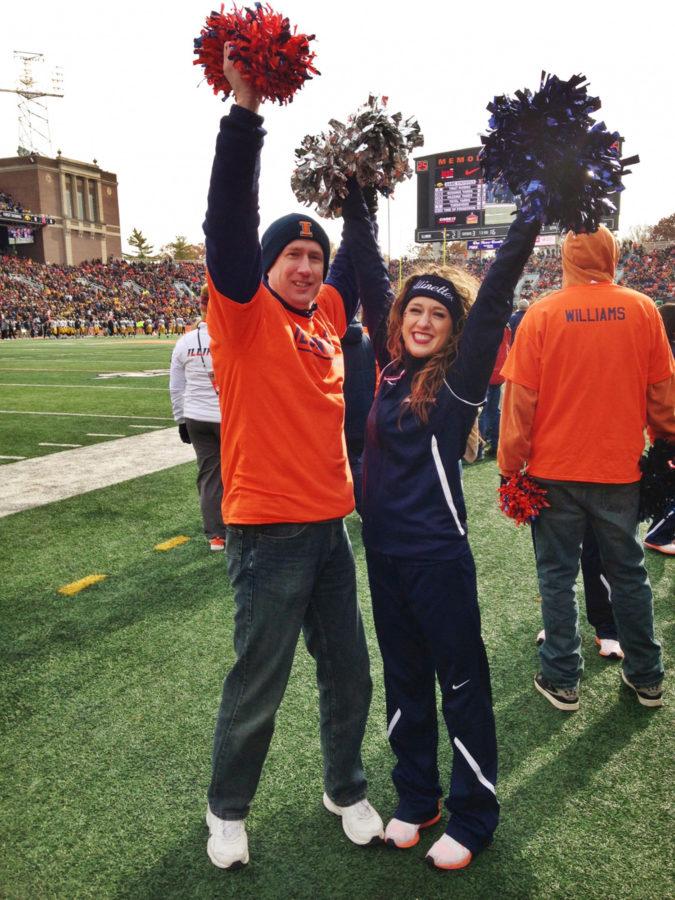 Caitlin Grant, a member of the Illinettes Dance Team, has a tradition of dancing with her dad, Doug, during Dads Weekend.

Members of the Marching Illini and the Illinettes Dance Team put in countless hours of practice to prepare for their shows throughout the year. But, during the Dads Weekend game, there is an additional element of fun as their fathers join in the performance.

Caitlin Grant, sophomore in AHS, started dancing when she was three years old, and has not stopped since.

Through the years, one of her biggest supporters has been Doug Grant, her dad. He came to all of her recitals and competitions and danced with her at Dads Weekend events. This weekend will be the sixth time he has joined his daughter in a routine.

“In high school, it was just in front of the team, coaches and parents, but last year was in front of a lot more people,” Caitlin said.

Luckily, her father is willing to perform in front of the large crowd, and enjoys the time he gets to spend on campus with Caitlin.

“Dads Day gives the parents an opportunity to take part in some of the activities that our kids are passionate about in college,” Doug wrote in an email. “We get a firsthand look into how much time and practice is needed for the Marching Illini and Illinettes to look as great as they do at each performance.”

The sophomore Illinettes have choreographed the dance for this year, which will incorporate the whole team and all 28 dads. Caitlin said they will rehearse the dance on the morning of the Dads Weekend game, but during the game, they will also be calling out the moves in case the dads forget them.

She said seeing her dad dance is always entertaining.

“You never see him dance unless he has to, which means it’s really funny when he’s out there,” Caitlin said.

For George Couston, junior in Engineering and a member of the Marching Illini’s clarinet section, this weekend will be special because it’s the first time his dad will be on the field with him.

Couston said his dad was the one who took him to campus when he was auditioning for the Marching Illini, and he’s excited to be able to share part of the experience of being on the field with him.

“Having him come down here and take the time to make the three-hour drive means so much,” Couston said.

He elaborated that like every show, the Marching Illini pay great attention to detail in preparation for the weekend, but the members know that the dads will be bringing an additional atmosphere of fun to the performance.

Daniel Knobloch, senior in Engineering, said the Dads Weekend show will be especially memorable for him because it’s the last time he and other Marching Illini seniors will take to the field as Illinois students.

“We all know it’s going to be a fun environment. We have a song that will focus on the dads, and we’re looking to enjoy our time on the field,” he said.

Knobloch’s entire family is coming to campus on Friday, but he said the weekend will really begin with the Marching Illini’s Dads Weekend practice early Saturday morning.

“(My dad has) been a huge supporter. He’s not musical himself, but he’s always been there to watch,” Knobloch said. “He’s a huge photo enthusiast; I don’t remember a time he’s not been taking photos of the section.”

For all three of the students, Dads Weekend serves as an opportunity to show their fathers how they spend their time at the University.

“We aren’t really around our parents much. It’s nice to have a weekend to show them what goes on around campus,” Caitlin said.

Besides being a tradition for the students performing, the Dads Weekend show is also always immensely entertaining for the crowd to watch.

“The MI dad’s kick line is second to none!” Couston said.