All over campus, there seems to be a new apartment being built on every block. Here is a rundown of some of these new projects to give an in-depth look at how these apartments stack up against each other. 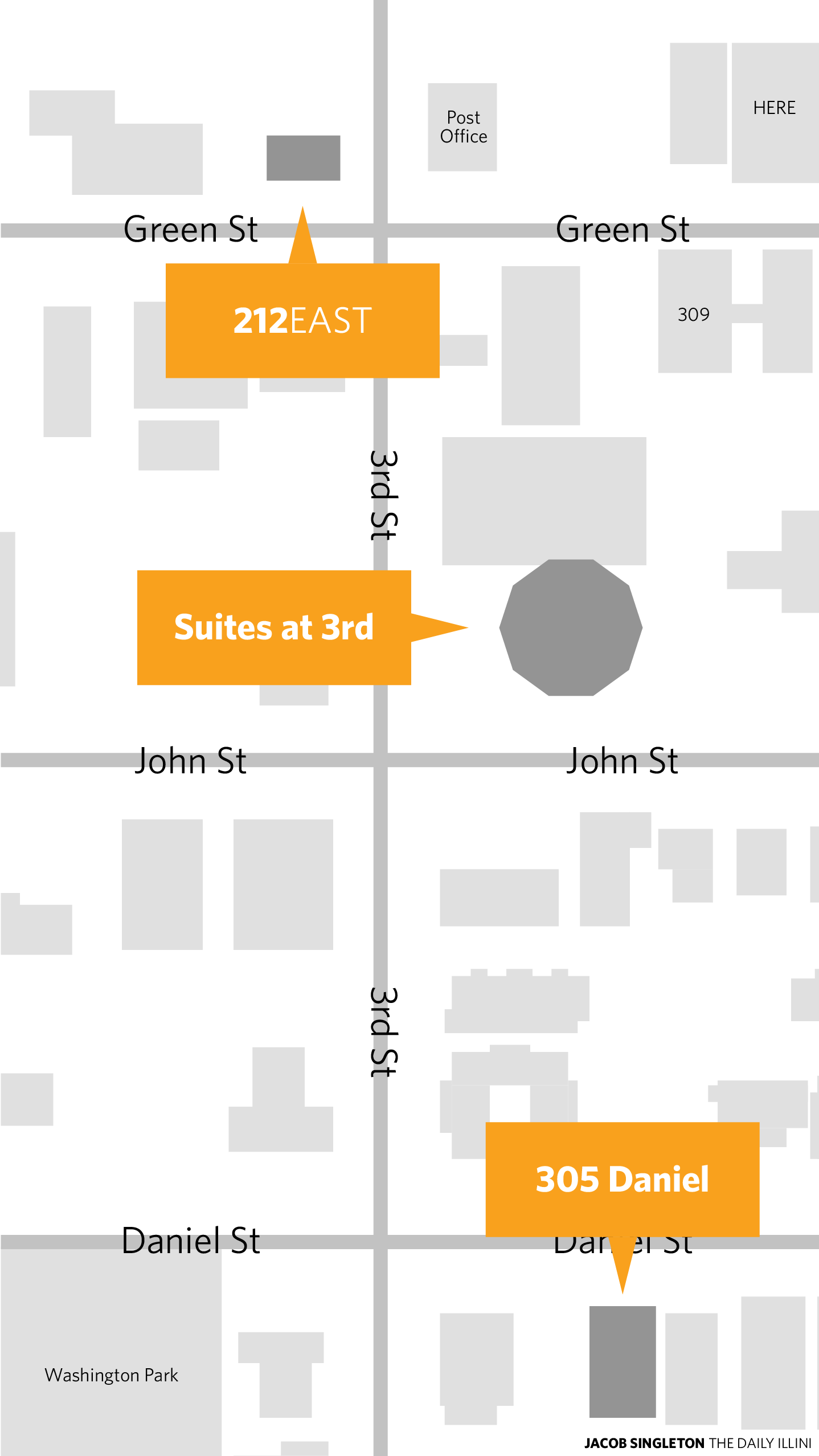 Just a block down from The Suites at Third is 212 East Green, located on the corner of Third and Green St. First Column Student Living’s latest construction project is one of the newest buildings on campus available for students starting in fall 2017.

Samuel Mtunga, a principal at XFD Real Estate Partners, spoke on behalf of the construction at 212 East Green, emphasizing the importance of completing their project on time and keeping their promises to future residents.

“We are actually two months ahead of schedule. We’re scheduled to deliver at the end of May, and initially we were planning on delivering mid-July.”

According to First Column Student Living’s website, 212 East Green will come fully furnished, with a workout facility, shared and private study rooms and lounges, and an outdoor courtyard.”

Mtunga also addressed the rate assurance plan that First Column Student Living offers to its residents. He explained that some companies tend to reward people that sign a lease later, rather than the ones who sign earlier. This causes students to wonder if they are missing a better deal down the road.

“We allow you to lock in the space that you want, and you are guaranteed that if we ever offer anything better than what you have, then you can get that too,” Mtunga said.

The Suites at Third

American Campus is a company that owns multiple properties across campustown, including well-known buildings like 309 E. Green, Lofts 54 and the Tower at Third. They are also close to completing their latest endeavor, The Suites at Third.

The building will offer professional, on-site management and maintenance, on-site community assistant staff, and 24-hour, on-call staff. Suites residents will have access to the amenities at The Tower at Third, as well.

In regards to construction deadlines, American Campus says that in the event your accommodation within the community is not ready for occupancy on August 24, they will compensate you $1,000 in the form of a gift card.

Another brand new property opening up to students this fall, is 305 Daniel, located blocks away from the Quad. Owned by Next Chapter Properties, workers for 305 Daniel say construction will be completed by the start of the Fall 2017 semester.

According to New Chapter Properties website, 305 Daniel offers five different room options for students. There are two different 2 bedroom, 2 bath options, with the only difference being square footage and cost, ranging from $890 to $935 per month. Their 3 bedroom, 3 bath option starts at $875 per month, and their 4 bedroom, 3 bath option is $799 per installment. Lastly, 305 Daniel offers a two-bedroom bunk option, featuring two rooms with two bunkbeds for a total of four people, starting at $499 per month.

305 Daniel will cover all cable, internet and trash, however, each resident has a utility cap per month per floor plan to cover electricity/water.

The units come fully furnished, and will offer a wet bar in every room type, as well as ceiling fans and available private balconies. 305 Daniel does not offer 24-hour on-site security.

No matter where you end up living, don’t forget about the properties that are still under construction. Pardon the dust, and look forward to exciting new apartments.

Jillian is a junior in Media.