Overlooked benefits of living in a house 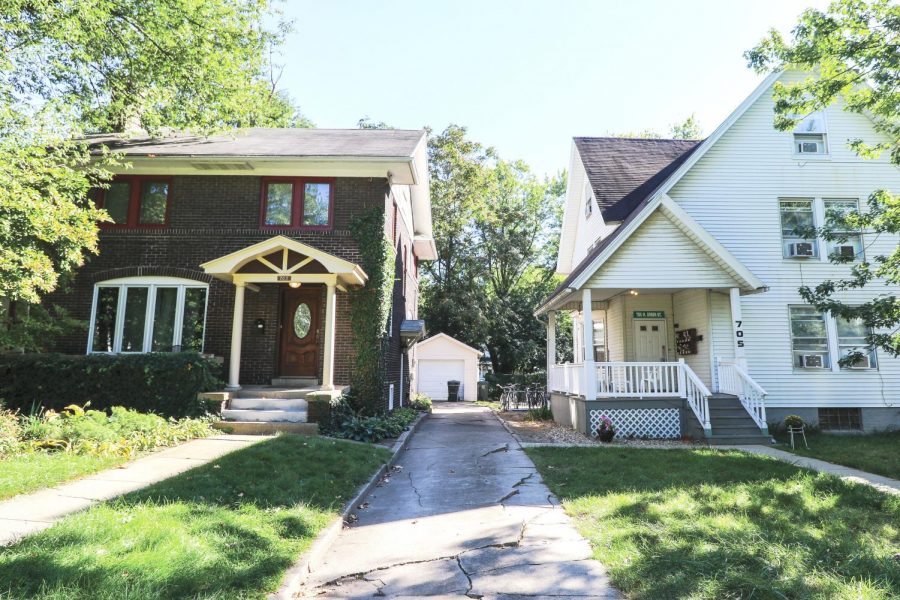 The view of two houses on the 700 block of West Green Street in Urbana. There are many houses in Urbana that are available for students to rent for the duration of the school year. Rachael Bolek, managing editor for online, says there are different pros and cons to living in a house versus an apartment.

It may feel like you just moved into wherever you’re living this school year (probably because you did), but it’s already time to start looking for somewhere to live next year. People usually start signing leases for the next school year in September and October, which may seem crazy (because it is), but if you want somewhere good to live, you should start looking right away.

While everyone else typically recommends different apartment complexes to live at and various leasing companies to browse through, I have one recommendation: Try living in a house.

You may be asking yourself, “Are there any houses to live in? All I see are dorms and apartments.” Well, believe it or not, there’s stuff that’s further east in Urbana than Illinois Street Residence Hall. After crossing Lincoln Avenue, you’ll find numerous houses you could live in for the year.

I decided to live in a house last year, and it was a great experience. There are pros and cons no matter where you live, but I’ve included a few major perks to living in a house below.

If you live in a house, you’ll probably have a lot more room than if you were in an apartment or dorm. Where I lived last year, we had two floors, an attic and a basement. Our kitchen sat five people, and there was plenty of room to move and cook. That was a huge perk for me; most of the apartments I looked at had small kitchens. As someone who enjoys cooking, I needed more counter space.

The other perk was having a backyard and an enclosed front porch. There were spaces to park in the back which we didn’t need a permit for and we didn’t have to pay an absurd amount of money to use. Plus, we never had to worry about someone taking our spots because people didn’t know there was parking in the back. As for having a front porch, it was especially nice in the fall and spring because I could sit outside and enjoy the weather. Additionally, if I ever had a package delivered, it could stay on the enclosed porch without me having to worry about it being out in the open for someone to take.

I found out rent for a house is typically cheaper than most apartments. This may not be true in all cases, but I think it applies to most. Part of this is because you are further from the heart of campus, but I always got to class in plenty of time because I was near the Green and Silver buses. I also biked for a while, and it always took me less than 10 minutes to get wherever I was going. For this, weigh your options and decide if you’d rather pay less to live somewhere, or if you’d rather be closer to Campustown. Also, look into what bus stops are near where you’re looking at. If you’re one block from a bus that will take you right to Transit Plaza, it may be worth it to live somewhere where the rent is cheaper.

In my experience, my landlord last year was super responsive whenever we had an issue with something in the house. He told us to text him if we ever had any problems, which isn’t the case if you’re living in an apartment. With an apartment, you’ll have to submit a maintenance request and hope the company responds to you. I’ve found it can take many days to even hear back from the company, let alone for them to do something about the issue (unless it’s urgent). When we had an issue, our landlord was at the house on the same day or the next day after we reached out to him. This may have been an anomaly, but it’s worth noting.

If you’re looking for a four- or five-bedroom apartment, definitely look into renting a house instead. The house I was in last year had five bedrooms, which is also partly what helped lower the cost of rent. If you’re trying to live with a larger group of people, this may be a beneficial route for you to take. Plus, a major perk to a house, or at least the one I was in, is the bedrooms were incredibly spacious.

There are many pros I’ve found for living in a house, but there are pros no matter what living situation you’re looking at. Each option has its own set of pros and cons, so it’s just a matter of what’s more important for you to have. Weigh your options before you sign a lease and make sure to look around. I’ve now lived in the dorms, a house and an apartment. I’ve enjoyed each year no matter where I’ve been; it’s just taken a little adjusting each time.

Rachael is a senior in Media.