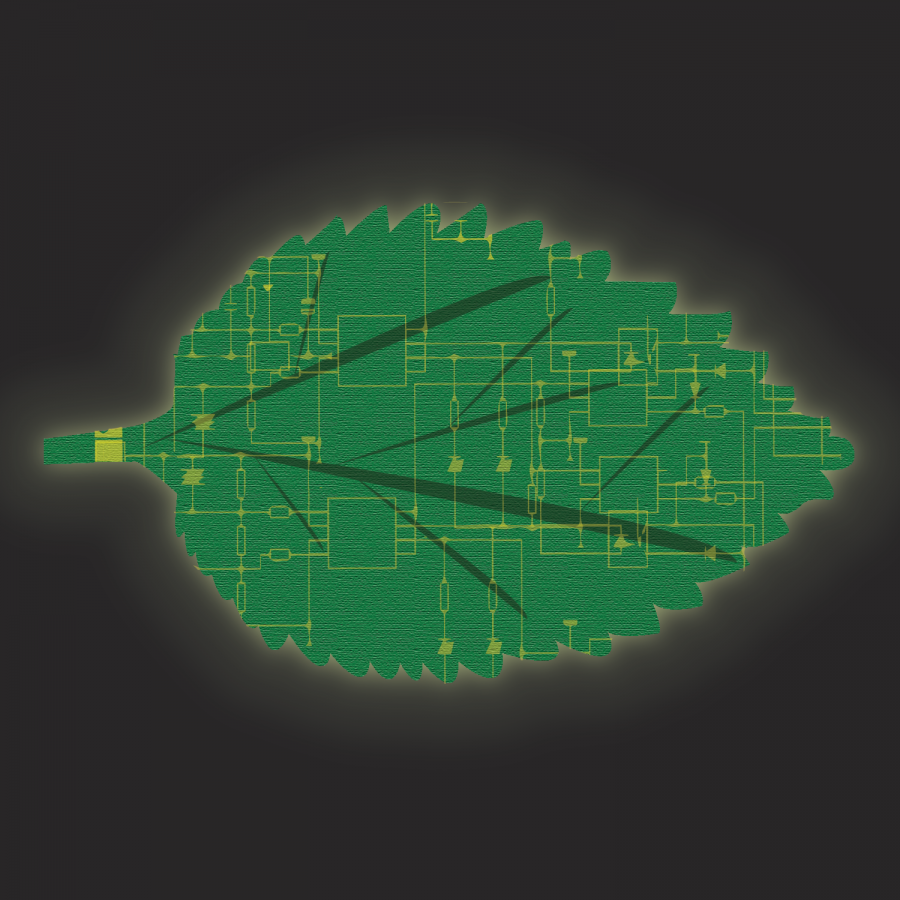 Carbon dioxide, a very small and very stable greenhouse gas, has been voluminously ejected into Earth’s atmosphere during centuries of fossil fuel combustion. It has caused widespread disruption of natural systems via climate change and threatens even worse damage in the near future. To avoid the worst maladies of a heating world, CO2 emissions must fully cease by 2050, according to a report from leading climatologists.

Replacing all sources of the greenhouse gas is a tall order. Over 85% of the world’s energy originates from fossil fuels, and budding renewable energy technologies will need to expand aggressively — some say at an impossible rate — to keep up with the energy demand.

Instead of fully eliminating fossil fuel use, what if the CO2 produced was removed from the air? Researchers at the University of Illinois at Chicago have been pursuing this question by designing an “artificial leaf,” a constructed device that cleanses the air of CO2 and turns it into carbon-neutral fuel.

The proposed artificial photosynthesis system, researched by Singh and UIC graduate student Aditya Prajapati, would be more efficient than actual plants. According to the pair’s paper published in the journal American Chemical Society Sustainable Chemistry and Engineering, the artificial leaf is more than 10 times better at absorbing CO2.

Despite its name, the artificial leaf hardly resembles its natural green namesake. Rather, Singh described the device as a “balloon” made of a membrane containing both water and a box-shaped system equipped with solar cells.

Artificial photosynthesis isn’t new — scientists have been making rapid progress in the technology for the past two decades — but the UIC team’s innovation lies in the membrane and its ability to capture CO2 from ambient air, a challenging feat given the gas’s low concentration and molecular stability. They once again found inspiration in plants.

“We look into the architecture of natural leaves, and they have stomata,” Singh said. “The stomata are the holes in the leaves that open and (close) so that whenever leaves need carbon dioxide to make glucose, they function accordingly. We thought, how about we include a similar feature in our artificial leaf?”

The ion exchange membrane surrounding the artificial leaf uses a moisture gradient — wet on the inside, dry on the outside — to grab CO2 from the air and release it inside the balloon. While a real leaf converts sunlight, CO2 and water into sugars, the photosynthesis device creates carbon monoxide and other compounds used to produce gasoline, diesel and other fuels.

These fuels, literally created out of thin air, can drive what Prajapati called a “closed carbon cycle,” where no additional CO2 is added to the atmosphere when burning air-derived gasoline.

“We capture the carbon dioxide, we convert it to fuel and those fuels can possibly be used for automobiles,” he said. “(Cars) emit CO2 with the result of combustion, and we capture the CO2 again.”

Other carbon-capture technologies exist on a larger scale, like “clean coal” power plants and direct air capture facilities, but Singh promotes the artificial leaf’s advantage of integrating every step into one device. While other approaches require storage and transportation to get CO2 from capture point to application, he said artificial leaves avoid these costs by capturing and converting the gas simultaneously.

The work of Singh and Prajapati is catching the attention of researchers like Heinz Frei, senior scientist in Engineering at the University of California, Berkeley and an expert in artificial photosynthesis. Frei applauds the membrane-coated artificial leaf for being able to absorb CO2 around the clock, even when the sun is down. The leaf keeps sunlight only to create the fuel ingredients.

Although the artificial leaf’s material composition has significant room for improvement — Frei said the leaves are too expensive for wide-scale production. Singh also wants to improve their durability — Frei said he sees promise, if not necessity, in artificial photosynthesis technology in the quest to eliminate fossil fuel use. To him, liquid fuel will be crucial for storing energy even in a future full of renewables. Artificial photosynthesis provides a fuel without adding more CO2 to the air or requiring fertile soil like real plants.

“Artificial photosynthesis is really, in my view, so important because it’s the only technology that uses solar energy on non-arable land to make fuel,” he said.