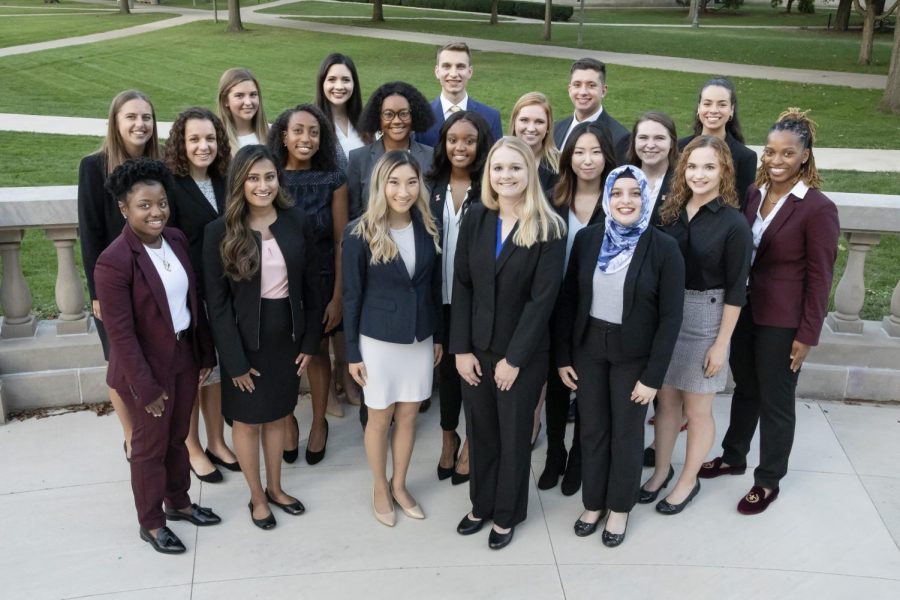 The class of 2019 homecoming court poses for a photo on the balcony of Foellinger Auditorium. The 20 candidates that were selected to serve on the court are viewed as role models for their peers and outstanding representatives of the University of Illinois student body.

Major: Food Science and Human Nutrition with a minor in Business

Fun fact: She is applying to Master’s programs to pursue a degree in Human Resources and Industrial Relations. She was also the recipient of the Dr. John E Collins Community Excellence Award.

Major: Political Science and English with minor in Spanish

Fun fact: She studied abroad in Pavia, Italy, as a part of her James Scholar course on refugee migration in the Mediterranean Sea.

Fun fact: Her career goals after pursuing her master’s degree in Dance include working as an instructor and dancer in Chicago.

Fun fact: She has studied abroad in Dubai, South Africa, Austria, Indonesia and Peru. She also is a three-time resident adviser.

Fun fact: She is extremely passionate about disability advocacy, serving as both a personal care assistant and a member of the Disability Awareness program.

Fun fact: She has been involved in both the Office of Volunteer Programs for Students Affairs and The Illinois Leadership program.

Fun fact: Emily is a fourth-generation Illini! She is also a Division I athlete on the Illinois Women’s Swimming and Diving Team.

Fun fact: Melani is a proud member of the United States Army and has received the President’s Award Scholarship.

Fun fact: Deniz has been volunteered at various organizations in town, with one being the Crisis Nursery. She also serves as a conversation partner for the Intensive English Institute.

Fun fact: Samantha is currently serving as the Director of Staff for the Air Force ROTC program here on campus.

Fun fact: Kayla has run one full marathon and two half marathons.

Major: Social Work with a minor in Leadership studies

Fun fact: Kelly has been involved with multiple organizations on campus such as the Women’s resource center, New Student Programs, and the Office of Inclusion and Intercultural Relations.

Fun fact: Catherine is a member of the Illini Football student section as a blockhead!

Major: Crop Sciences with a minor in Public Relations

Fun fact: Her love for Crop Sciences was fostered by growing up on her family farm in Northern Illinois. Kristine will be graduating with a full-time job with Corteva Agriscience.

Fun fact: He has had internships with ExxonMobil and the Process Safety group of Baker Engineering and Risk Consultants. He also has pursued research projects that are aimed at increasing the efficiency of Lithium-ion batteries.

Fun fact: After graduation, Heather will be working with Abbvie in their Clinical Trial Operations Development Program.