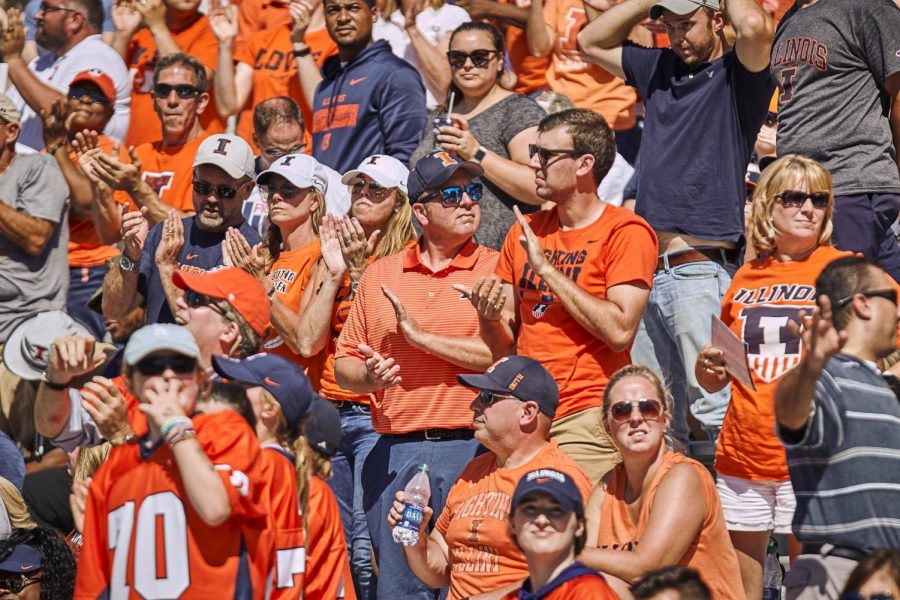 Illinois fans cheer from the stands of Memorial Stadium on Sept. 14 during the Illinois game against Eastern Michigan. Though every student has their own personal perspective of the tradition, Homecoming Week is a celebration that brings the campus together.

The word homecoming is one of nostalgia; almost everyone associates something with it fondly. When you think of the word homecoming, does the image of thousands of fans dressed in orange and blue at Memorial Stadium cheering on the fighting Illini come to mind? Perhaps you reminisce about the sights and sounds of the Marching Illini coming down the street during the Homecoming Parade,  followed by the parade full of extravagant floats? Or maybe you daydream about tailgates at Grange Grove with family and friends?

It’s easy to argue Homecoming Week is the most exciting time at the University. Although the word homecoming itself already has a positive connotation, every individual student has their own personal perspective of Illinois’ Homecoming. To confirm this, students were asked around campus about what comes to mind when the word homecoming is brought up and what they associate with it.

Matthew True, sophomore in LAS and member of Pi Kappa Phi fraternity, views Homecoming Week as a week of relaxation and quality time to be spent with friends.

“When I think of Homecoming, the first thing that comes to mind is the time when some members of my fraternity came over to my place early in the morning, and we cooked breakfast before the football game,” True said.

Although most students associate Homecoming with one moment in time, some students instead see Homecoming as one big picture.  Sabrina Rivera, who is a senior in LAS, could not think of one specific memory when asked. Instead, Rivera talked about the general attitudes and personalities she has experienced around campus.

“I just really enjoy the overall campus positivity,” Rivera said. “I transferred here the start of my junior year.”

It is not uncommon for transfer students like Rivera to feel as if they did not get the full Illinois experience due to their late arrival at the University. Despite this, Rivera feels as if she is a part of a close-knit community that the student body becomes every year during Homecoming, even though she did not attend the University as a freshman.

“Although I haven’t been here as long as others, I can say the entire campus honestly feels like one big family,” Rivera said. “I guess that’s what I really love about Homecoming.”

No matter what your connotation is of Homecoming, it is truly a week that brings the students of campus together for the Illini.

Meghan is a sophomore in LAS