We go way back: the rich history of Dads Weekend 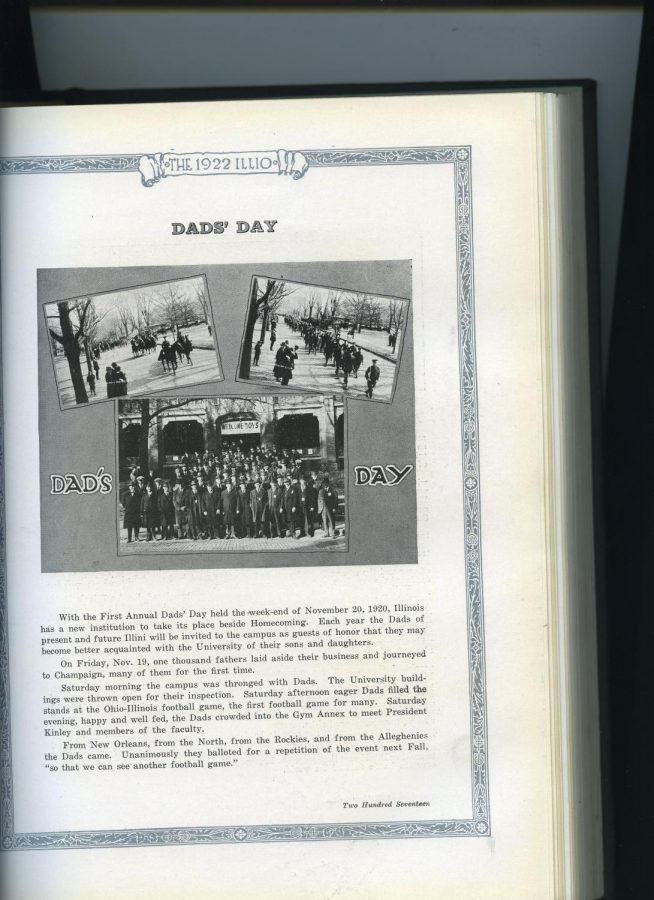 The first Dads Day celebration is printed in Illio Yearbook in 1922. The University of Illinois Dads Association was founded in 1922 and claims to be one of the first parent programs in the country, with their “King Dad” tradition having been practiced for over thirty years.

Friday starts the 2019 Dads Weekend, which will last until Sunday. While several events will take place, registrations aren’t required to participate in all of these events. Some events are free, and some, like the athletic events, may require tickets. Because of this, it is recommended to make a plan in advance.

The University of Illinois Dads Association was founded in 1922, making it just a few years shy of a century old. This organization claims to be one of the first parent programs in the country. This program’s “King Dad” tradition has been practiced for over thirty years. In this event, participating students are encouraged to nominate their fathers and explain why they are the most supportive and deserving of the award. The winner is announced on Saturday and is given awards, such as free tickets to Dad’s Weekend events.

This weekend will also include the IlliniDads 5K. This race is promoted for leisure, not competition. Other than football, which is traditional to Dads Weekend, there are other sports events, such as volleyball. There are various cultural events as well, which are listed on the University website.

These games and events will all contribute to raising money for the IlliniDads. The purpose of this organization is to support students on campus. Participating in the weekend events is a great way to both have fun and support the school. Approximately $20,000, according to the IlliniDads website, is collected and distributed every year. Their support includes $2,000 scholarships for students and grants for RSOs ranging from $500-$20,000. Information for applying can be found on their website.

Overall, the responsibilities for IlliniDads organization includes organizing Dads Weekend and financial aid. They welcome and encourage new members to join, and any father or father figure of a student at the University is considered to be eligible.  They have an organized group of board members who run elections for leadership positions within the organization.

Dads Weekend can be a great event for the family, though individual students can and are welcome to participate. Taking part in the events are great ways to support the IlliniDads, who have historically supported students and the school. The University can be supported in ways other than donations, but Dads Weekend provides a fun way to give back.

Nicholas is a freshman in DGS.