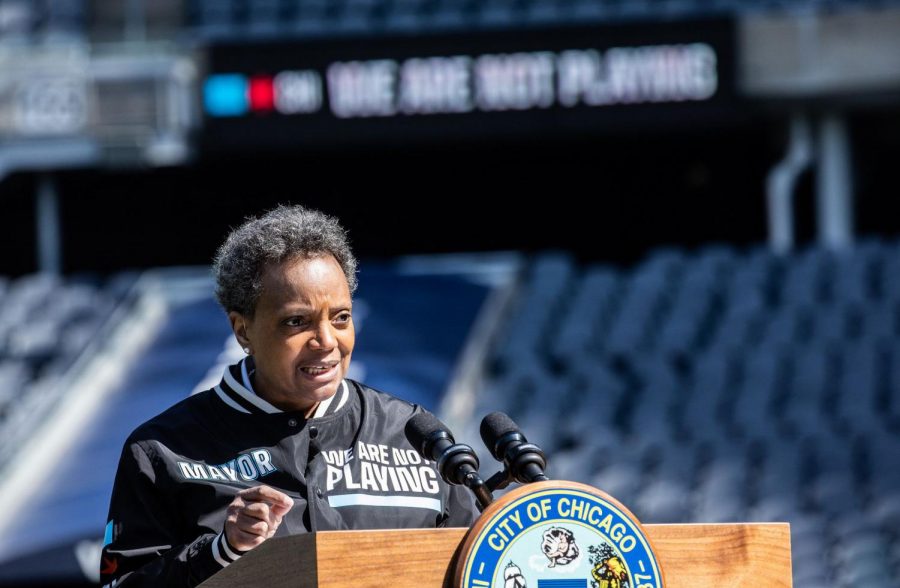 Chicago Mayor, Lori Lightfoot, launches the We Are Not Playing initiative at Soldier Field on April 6, 2020. In recent days, Lightfoot has addressed that Covid-19 deaths are disproportionately African American.

In the midst of crisis, the line between privileged and underserved seems to become increasingly bolder. Health disparities have been a longstanding cause for concern — a concern on the forefront of the global pandemic caused by COVID-19.

The media has been pragmatic in informing the public of how COVID-19 is adversely affecting a large percentage of males and an even larger percentage of the elderly. From what we know about virology, these statistics can be blamed on pathogen behavior. However, the disproportionately-rising incidence rate across minority populations cannot. Neither can we attribute the limited access of COVID-19 tests among lower-class families simply to biology.

While data right now might be too limited to make any sweeping conclusions, states across the nation have reported a disproportionately higher infection rate among black Americans, highlighting an important inequality in healthcare. The city of Chicago has reported that 72% of its COVID-related deaths are among the city’s African-American population. African-Americans constitute 70% of Louisiana’s virus-related deaths despite making up only about a third of the total population. Illinois has reported that African-Americans make up 43% of the state’s virus-related deaths, while only constituting about 15% of the overall population, and Michigan reports similar numbers.

Racial and ethnic minorities have long been suffering from a greater incidence of underlying conditions such as cardiovascular disease or diabetes, which are associated with  higher COVID-19 mortality rates. A lack of proper communication, insufficient resources and limited access to healthcare facilities have contributed to these numbers over time. Over the years, hospitals in low-income neighborhoods have been shut down and replaced with commercial buildings. A person’s zip code, in many cases now, determines the level of care they might receive.

These trends may be attributed to a variety of factors. African-Americans have faced decades of inequalities that place them at a greater risk of being uninsured, having underlying health conditions, being a part of the essential workforce unable to stay at home and facing racial bias that limits access to proper treatment.

Proper treatment is a subcategory of proper healthcare, coinciding with sufficient access to resources. COVID-19 tests have been the subject of scrutiny for some time now, as access to these tests is limited and results take time to be distributed. Concierge doctors, however, offer private healthcare to wealthy individuals who can pay an annual fee for around-the-clock care. These doctors are able to provide tailored care to their clients only. Any concierge doctor with access to virus test swabs is able to administer them to their wealthy clients immediately, skipping the line that most economically disadvantaged individuals are still waiting in. Even during a global pandemic, not all patients are treated as equals.

Back in March, many celebrities, politicians and athletes faced backlash as they revealed they were tested for the virus without showing any symptoms. On March 16, actor Idris Elba said in a Twitter post that he tested positive for the virus while stating he showed no symptoms and felt fine. This caused concern among many who are displaying telltale symptoms and are still waiting in line to be tested. Jumping the line in healthcare is not new, but is still leaving vulnerable populations behind while potentially exacerbating the spread of disease by those who are unaware of their prognosis.

While the underlying causes of these disparities have been around for decades, a global crisis such as this can only continue to shed light on them. It’s true that this pandemic has united many of us and provided us all with a common enemy. That shouldn’t, however, take away from the fact that there are people out there more vulnerable than some of us, and parts of our healthcare system could be failing them even now. I think there’s potential for our united front to stretch even further than it already has.