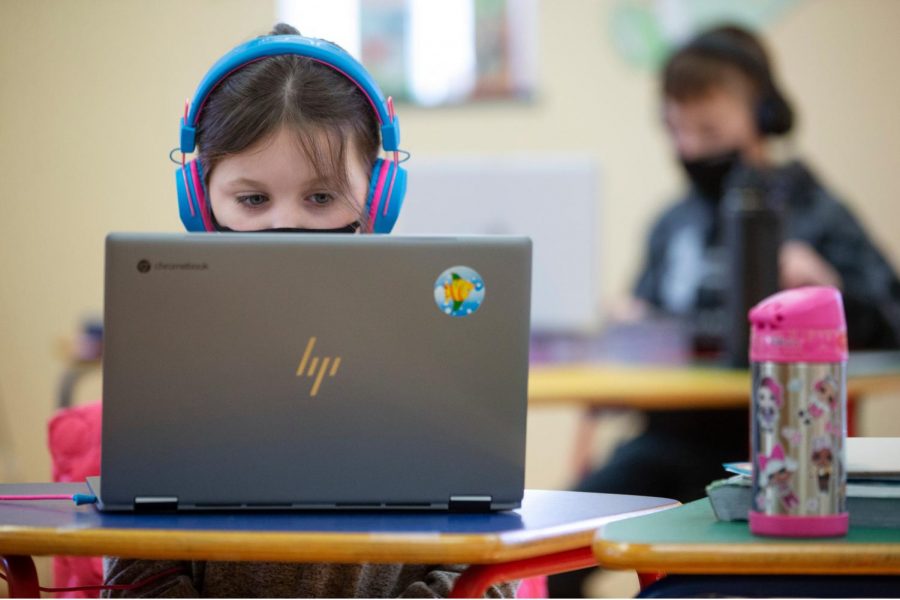 A child focuses on virtual lessons at the YMCA in Red Bank, New Jersey on Feb. 17. Studies have indicated a correlation between fitness and cognitive function in children.

Previous studies indicate a correlation between cardiorespiratory fitness and cognitive function in adults. It has been shown that increased cardiorespiratory fitness relates to better cognitive function and could potentially be used as a preventative measure against cognitive decline. Shelby Keye, a second-year doctoral student in the Body Composition and Nutritional Neuroscience Lab led by Dr. Naiman Khan in the Department of Kinesiology and Community Health here at the University of Illinois, worked to determine if the same correlation can be seen in preschool-aged children.

The study looked at the relationship between cardiorespiratory fitness and cognitive function. This correlation has been seen in older children, particularly adolescents and pre-adolescent children eight years of age and older. For Khan and Keye, the main question was whether that same relationship can be seen early on in life, which offers a sense of when it is best to intervene with physical activity and promote fitness.

The study involved a series of tasks, the first of which was asking the cohort of 59 preschool-aged children to perform a six-minute walking test. Each child walked up and down a 20-meter hallway for six minutes, and the number of laps they completed was noted. According to Keye, it is thought that children with higher fitness are able to do more laps within the same amount of time.

To assess cognitive function, the children were asked to complete a number of computerized tests that evaluated their ability to inhibit external stimuli and focus on a single stimulus. They were also tested on their ability to multitask, their academic achievement via pencil and paper tests and their IQ level.

Keye explained that previous research has shown how specifically doing cardiorespiratory or aerobic exercise will affect different brain functions and structures. This kind of exercise will improve specific areas of the brain involved in the cognitive functions that her lab looked at, such as attention abilities, task switching and working memory.

“The areas of the brain involved in those functions seem to improve when people participate in aerobic activity,” Keye said. “With our study, we did not find that; it’s not a causal study. It’s more just a relationship. Other studies with adults or adolescents have been able to look at brain structure and see improvements after exercise, but our study did not see that because we didn’t look at brain structure.”

While analyzing the data, the researchers controlled for variables such as diet, fat mass, age, sex and IQ. They also explored household income but did not find any statistically significant correlation.

“There are certainly ways to improve this type of study,” Keye said. “We can include things like genetics as potential confounding variables, increase the sample size and do more (event-related potentials).”

Event-related potentials are a measure of brain activity in response to a specific sensory, cognitive or motor event, assessed via electroencephalography.

Keye also said it would be ideal to look at the brain structure and function of these children, but doing that type of research on children as young as four is much more difficult, as it would involve MRI technology or another equivalent.

“It could be that these two factors are just developing together, or it could be that children that are more physically active are doing things at home that also somehow improve their cognitive function,” Keye said. “But I would definitely use this article to say, hey, there is this relationship here, so we should encourage physical activity at this age.”

The Center for Disease Control and Prevention recommends at least 60 minutes of daily physical activity for children and adolescents ages six through 17. For preschool-aged children, the CDC continues to advocate for daily exercise to promote growth and development. However, the U.S. Department of Health and Human Services indicates that only one in three children in the United States are physically active every day.

“We’ve seen this get worse with COVID, but more and more people are less active than they have been before,” Keye said. “It’s funny; we’re in a pandemic, but I’ve always felt we’re in some sort of pandemic when it comes to lack of physical activity. That’s why I do what I do. I think doing work like this and showing that exercise can be beneficial for more than just your physique can be encouraging for some people and get people to really think about being more active throughout the day for the rest of their lives.”

Keye is the first author of this study, the findings of which have been published in the Journal of Clinical Medicine and can be found here.