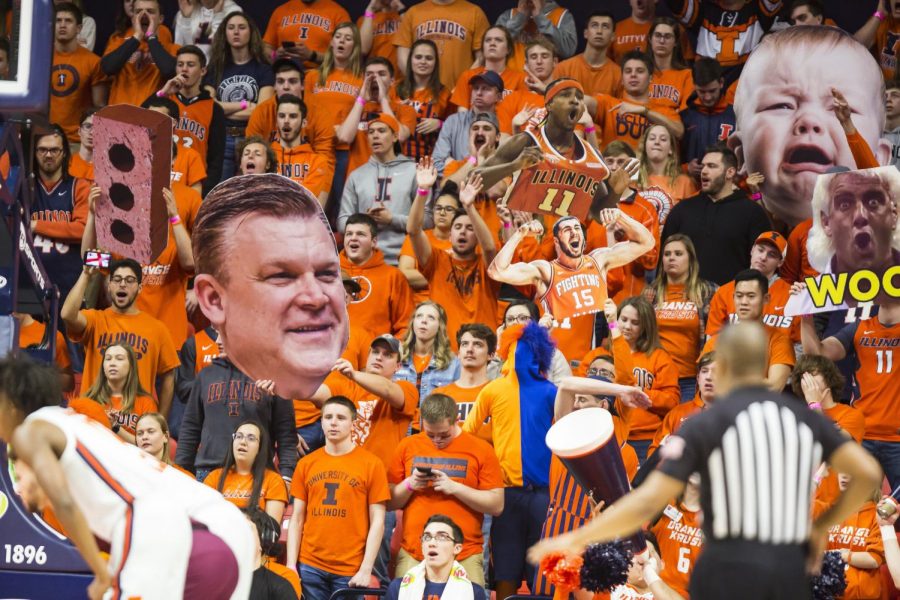 The Orange Krush student section shouts at a game between the Illini men’s basketball team and Minnesota at State Farm Center Jan. 30, 2020.

A lot of things have changed since your freshman year: You’ve made new friends, created lifelong memories, spent hours studying and hanging out on the Main Quad, had a few too many drinks at any of the campus bars and earned a degree (congrats on that by the way)!
The success of Illinois sports teams is also something that has changed since your arrival in 2017, whether that be a men’s basketball program that went from sub-.500 to a top seed in the NCAA tournament, a football team that went from failing to win a single conference game to a bowl berth two seasons later or a soccer team that went from one of the worst teams in the conference to a Big Ten Tournament host school.
You had it good at first in 2017. The volleyball team was playing well and advanced to the NCAA regional semifinals with a stacked lineup of Jordyn Poulter, Jacqueline Quade, Megan Cooney, Ali Bastianelli and Beth Prince, among others.
You also had some rough seasons to sit through your freshman year.
After starting the season with two home wins, the Illinois football team failed to win another game, going on a 10-game losing streak, including a 35-point loss to in-state rival Northwestern to round out the season.
The soccer team struggled in conference play: It won just two home games all season while scoring 13 total goals across 19 games in the fall.
The men’s basketball team went 4-14 in conference play, and it won just one game on the road all year while falling in the first round of the Big Ten tournament in Brad Underwood’s first season at the helm.
A lot has changed from your freshman year to now and so has Illinois sports. You remained loyal, passionate, vocal and, most importantly, an Illinois fan.
And the sports gods rewarded you.
Several big home wins for the men’s basketball team, including a court invasion at State Farm Center following a 79-74 win over Michigan State in 2018 and a narrow win over Iowa to clinch a double-bye at the 2020 Big Ten tournament, are just two of several examples for the program over recent years.
A last-second field goal to secure a historic upset over No. 6 Wisconsin at Memorial Stadium during Homecoming weekend.
A Final Four run for the volleyball team in 2018 after a 28-3 regular season, which included 10 wins over top-25 teams.
And, of course, a men’s hoops Big Ten tournament title after a historic 2021 season with the likes of consensus First Team All-American Ayo Dosunmu, Big Ten All-Defensive Team inclusion Trent Frazier, Second Team All-American Kofi Cockburn and Big Ten Sixth Man of the Year Andre Curbelo.
Supporting Illinois sports can be hard at times. Getting through years of underwhelming performances and losing seasons is hard.
One thing you sign up for as a sports fan is years like those. It makes you stronger, more resilient and grows your patience.
And it makes the good years more rewarding and enjoyable.
Whether it be sitting in the Orange Krush section at State Farm Center, standing during the halftime card display in the north stands at Memorial Stadium or relaxing in the sun on a hot day while watching baseball at Illinois Field, Illinois sports always offer a good time, regardless of the score or outcome.
Illinois sports can disappoint and excite, make you believe while also making you wonder why you signed up for letdown after letdown.
But, of course, it teaches you the power of community, teamwork and passion.
If you can get through years of supporting disappointing Illinois sports, you can get through anything and everything life has to offer.