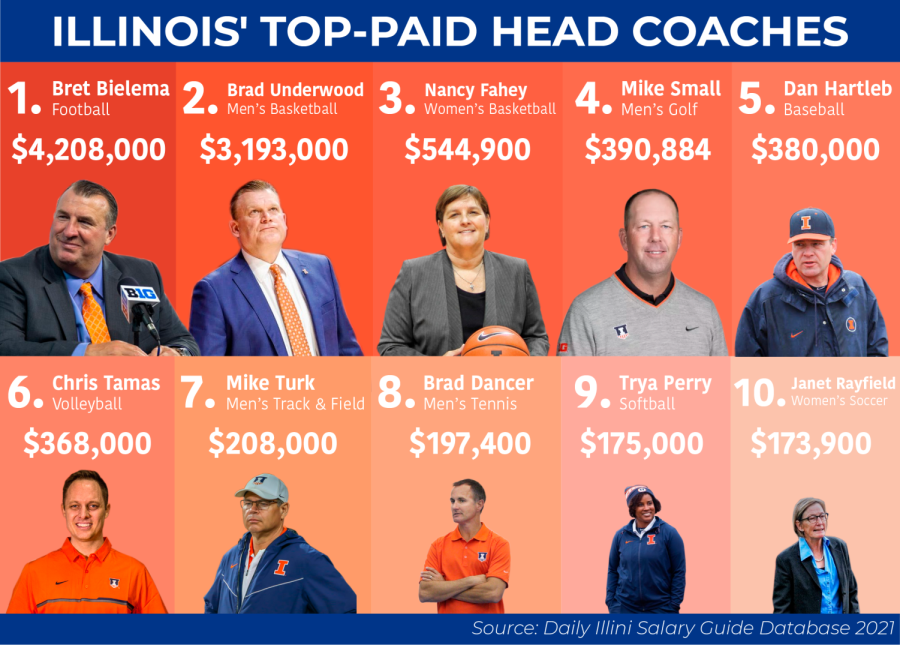 Bielema is in his first year in Champaign, taking over for former head coach Lovie Smith. The Illini head football coach is making $200,000 more per year than Smith did, and Bielema has found more success than his predecessor, as the Illini are 4-7 through 11 games this fall.

Despite being in his first year at Illinois, Bielema has Big Ten coaching experience, as he spent time with Iowa and Wisconsin, though he most recently was a linebackers coach with the New York Giants.

Underwood is in his fifth season in Champaign, and his salary is $215,000 less than the figure reported last season.

The head men’s basketball coach led the Illini to one of the greatest seasons in school history, winning the Big Ten tournament and earning a No. 1 seed in the NCAA tournament for the first time since 2005, while the Big Dance bid was the program’s first since 2013.

Fahey is the highest paid female coach at Illinois, while her salary decreased by $28,100 this season. The head women’s basketball coach is in her fifth season at the helm in Champaign.

She notched her first Big Ten tournament game win last season in the team’s 67-42 win over Wisconsin, while Illinois finished the season 5-18 overall and 2-16 in conference play.

Small is one of the most decorated Illinois head coaches, as he has led Illinois to 11 Big Ten team titles, including six straight. He also has helped the Illini secure a berth in 13 straight NCAA Championships, a streak that continued last season.

The head men’s golf coach has been with the program for 21 years, is an 11-time Big Ten Coach of the Year award recipient and was the sixth highest-paid coach last season, surpassing Dan Hartleb and Chris Tamas after seeing a $35,596 salary increase this year.

Hartleb is in his 17th season as head coach with Illinois, and he saw his salary increase by $20,000 this year after leading the Illini to a 22-22 record last season.

The 2015 Big Ten Coach of the year, Hartleb has been at Illinois since 1991, when he joined as an assistant coach before being promoted to associate head coach in 2001 and head coach in 2006.

Tamas is in his fifth season with the Illini, while his salary increased by $10,000 despite the Illini going 7-11 during last year’s COVID-shortened season.

The head volleyball coach led the program to the NCAA Final Four in 2018, and though the team last made the NCAA tournament in 2019, Tamas has the Illini in a position to potentially return to the national competition with two matches left to play.

The men’s and women’s track and field head coach Turk got a $30,000 pay raise this year. Turk will enter his 10th season as head coach at Illinois, though he first came to the University in 2006 as an assistant coach.

Dancer heads into his 17th season at Illinois after leading the team to a Big Ten tournament title last season — its first since 2015. He earned a $12,400 pay raise this season.

Last season, the Illini went 23-3, including a 15-1 conference record, while they also earned a berth in the NCAA tournament.

Perry is in her sixth season at Illinois, while she has coached at the Division I level for 20 seasons. Last year, the Illini went 24-20 in a conference-only season.

The head softball coach has also spent time at Ball State, Western Kentucky and Birmingham Southern, while she has accumulated over 500 career wins. The Illini will look to earn a berth in the NCAA Regional for the first time since 2019 this season.

Rayfield completed her 19th season as head coach at Illinois, while she notched her 100th career Big Ten win on Oct. 3.

The Illini struggled this season, going 5-11-1 overall and 1-8-1 in conference play, though they will look to turn things around next year.