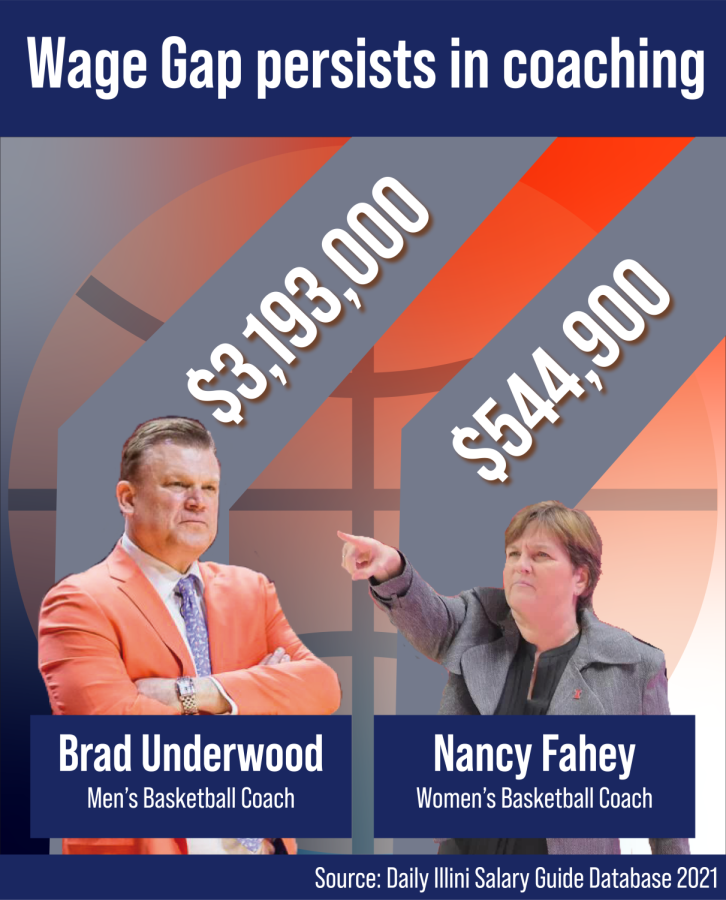 A couple weeks ago, I wrote about the importance of women’s sports. I also mentioned that the average men’s assistant coach salary is higher than the average women’s head coach salary.

Fortunately for us, the University publishes the salaries of all its employees every year, including sports coaches. To absolutely nobody’s surprise — OK, maybe like three people — head football coach Bret Bielema is Illinois’ highest-paid employee, making just over $4.2 million per year.

As with literally everything, there’s a gender gap in coaching salaries. For the sake of this column, I’ll focus on sports where teams compete in both genders and have separate coaches, though the University should give the coaches who work with both teams, such as Janet Rayfield (soccer), Chris Tamas (volleyball) and Sue Novitsky (swim & dive) a raise already. Mike Turk coaches both men’s and women’s track, and Sarah Haveman is the head coach for both men’s and women’s cross country. Baseball and softball are different sports, so I’ll avoid comparisons here to avoid apples versus oranges — but please, give Tyra Perry a raise.

There are four sports on campus where there are separate teams for each gender and where the teams are coached by different people: gymnastics, golf, tennis and basketball. We’ll dive into it here.

That is also the last time we’ll see that here. The rest of the way, we have gender gaps.

Golf has a fairly wide gender gap compared to the other sports at Illinois. The two teams have seen similar levels over the past several years, but men’s head coach Mike Small’s salary of $390,884 is significantly higher than women’s head coach Renee Slone’s salary of $126,250. Small has been here several more years, but the University would be wise to give Slone a raise.

But the sport with the deepest-running gender gap is arguably basketball.

Brad Underwood is among the highest-paid state employees, with a salary of about $3.2 million. Nancy Fahey, who coaches the women’s basketball team, makes just under $545,000.

I couldn’t find Underwood’s and Fahey’s original contracts, so I’m not entirely sure if the wage gap extends to benefits. But I did find their extensions. Underwood’s extension contract states the contract can be extended if the men’s basketball team makes the tournament in 2022, 2023, 2024 and 2025. He’s also eligible for bonuses if he remains the head coach at Illinois. Fahey’s extension contract makes no mention of performance-based extensions or bonuses. In fact, Fahey’s extension talks more about termination for bad performance than it does for rewards for good performance.

On the women’s side, Hernando Planells makes $165,000, Corry Irvin makes $146,000 and John Patterson earns $159,800. All of the basketball coaches whose salaries I’ve listed above, with the exception of Patterson and Alexander, are in their first years coaching at Illinois. As you can see by now, the men’s coaches’ salaries are significantly higher than the women’s coaches’ salaries. For a university that preaches equality, it still has a long way to go to make it a reality.

To be clear, whether college coaches are paid too much is a different discussion altogether. But as long as this institution is going to spend millions of dollars in salaries for just a handful of coaches, it has an obligation to the campus community and Illinois taxpayers to ensure that coaches are compensated equally for equal work.