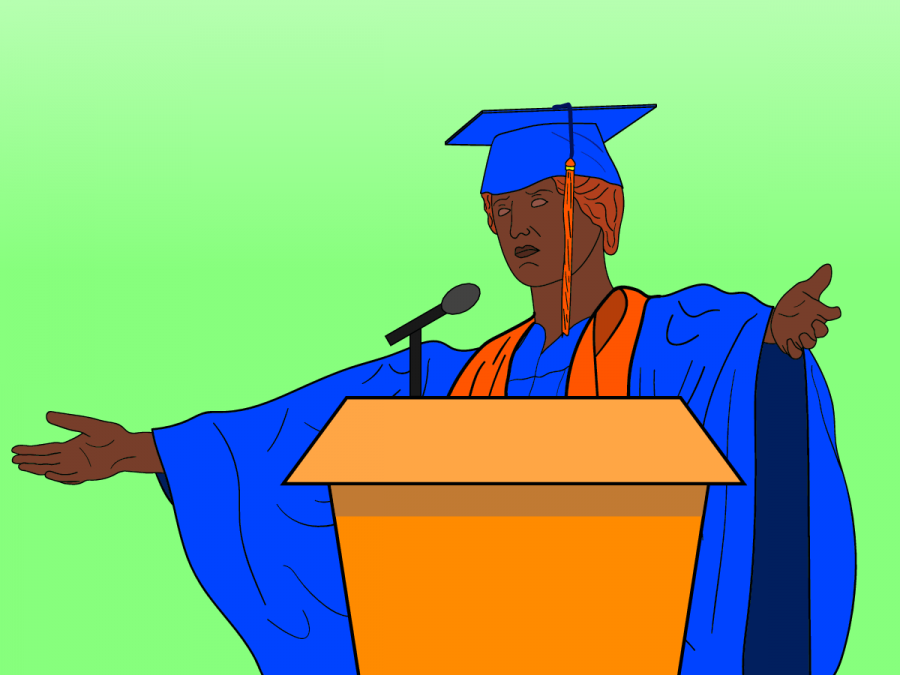 When one phase of life ends, another one begins. The end of one’s education brings upon the commencement of one’s journey into the so-called “real world.” To celebrate this new, often terrifying beginning, the colleges and universities responsible for this change enlist notable alumni, heads of state, actors and CEOs to address the graduating class and give a few words of wisdom that graduates will hopefully hold onto.
Most speakers fall flat, droning on for way too long about their own accomplishments or giving thanks to the people who paid them to be there. However, there are a few speakers whose commencement speeches deliver something worth holding on to. Here are three speeches worth listening to.
Daveed Diggs, Brown University (2017)

To list Daveed Diggs’s list of accomplishments would nearly take up the whole paper, and considering they occurred within a five-year timespan is simply astonishing. He won a Tony Award for his role(s) in Hamilton, wrote and starred in a film that earned multiple nominations at the Independent Spirit Awards and released multiple albums with his experimental hip-hop group Clipping. However, his speech at Brown University’s Baccalaureate ceremony focuses on the time before all that.
“Daveed Diggs was born on January 20, 2015, four days before his 33rd birthday, at approximately 9:45 pm when he strutted down a fake staircase at the public theater in New York,” proclaimed Diggs, referring to his Broadway debut — when the man the public know as Daveed Diggs diverged from the “real” Daveed Diggs. Half reflection on his time at Brown and half meditation on the public perception of the persona, Diggs details his time spent in the in-between: The years spent as a substitute teacher, auditioning for commercial roles on the weekends, failing to find a paid acting gig.
Diggs seamlessly alternates between speaking and rap, showcasing his mastery of the spoken word all while keeping his audience entertained. A modern-day renaissance man, Diggs’s commencement speech reminds us that our favorite artists are more similar to us than we think — failures and all.
David Foster Wallace, Kenyon College (2005)

Legend has it that Wallace was only convinced to give his speech at Kenyon College after being promised a game of tennis with the college’s Commencement Coordinator. The literary community has never been more thankful for a tennis match. A testament to its lasting relevance, the speech, entitled “This is Water,” is the only commencement speech to have its own page on Wikipedia Throughout his speech, Wallace delivers his thoughts on the difficulty of empathy, the importance of exercising choice over what we pay attention to and the true value of a liberal arts education.
I’m sure we’ve all had that moment where a driver cuts you off or turns in front of you without using a turn signal. We may be quick to call that person a jerk and wax-onanistic about their jerkish tendencies. Instead, Wallace urges us to consider the possibilities behind why the driver may not be an asshole, to imagine the driver as a person as complex and real as you are.
“Of course, none of this is likely, but it’s also not impossible … It will actually be within your power to experience a crowded, hot, slow, consumer-hell type situation as not only meaningful, but sacred, on fire with the same force that made the stars: love, fellowship, the mystical oneness of all things deep down,” says Wallace.
It’s a deeply compassionate speech that anyone, college graduate or otherwise, can derive meaning from. We are the center of our own universes, but with Wallace’s words in mind, we can fight that and try to create a more compassionate, meaningful life.
Meryl Streep, Barnard College (2010)

She’s captivating in “The Dear Hunter,” terrifying in “The Devil Wears Prada,” wise in “Mamma Mia!” and now she’s speaking at Barnard College. What advice could you possibly expect from the woman who’s done it all?
Streep’s natural ability to engage her audience makes her 30-minute speech feel like ten, as she relates her experiences as an actress to existing as a professional woman in a male-dominated workspace. Streep emphasizes a cultural shift, one signified by the change in what character of hers men most like. At the beginning of her illustrious career, it was Linda from “The Deer Hunter” — a young woman patiently waiting for her boyfriend to return from the war (she even makes note that the first time she met Bill Clinton, he told her Linda was his favorite part of the movie). But now, entering a new decade we’ve passed through, the most common favorite character, of men and women alike, is the powerful, stunningly dressed Miranda Priestly from “The Devil Wears Prada.”
Streep congratulates the young women sitting in front of her for being brave enough to challenge traditional gender roles and make way for this cultural change. Wise beyond her years, Streep relates this societal change to the personal changes the graduates will be certain to face. “This is your time and it feels normal to you, but really there is no normal. There is only change, and resistance to it, and more change.”