The many passions of an artist, parent 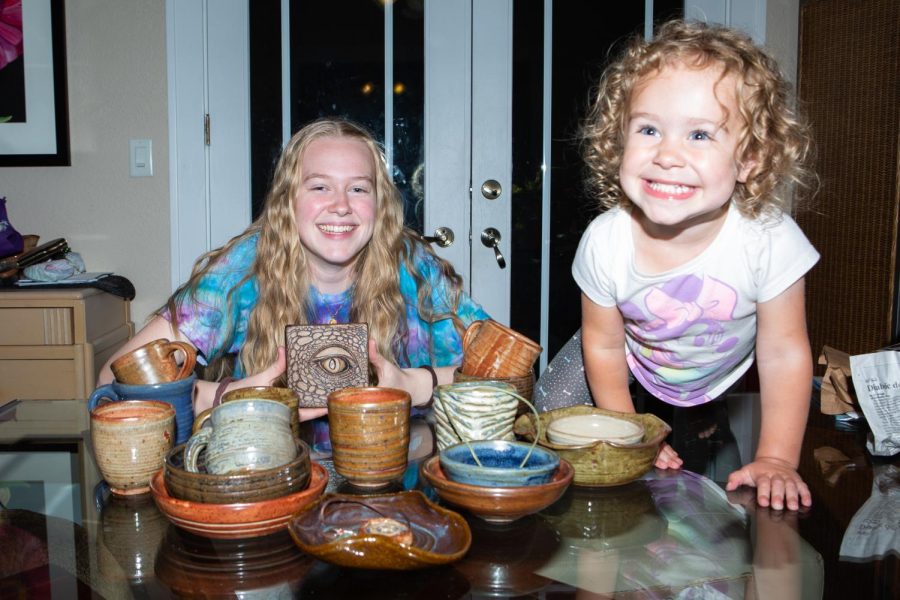 Twenty-year-old Shaersti Anderson sits with her daughter Raelynn amongst an assortment of ceramics wearing a tie-dye shirt she made. Anderson’s tie-dye business is on hold but she hopes to start it back up next year.

When Shaersti Anderson was in high school, she started tie-dying. But not the way most might picture, at a block party as a kid haphazardly dipping crumpled shirts in buckets of dye.

Anderson methodically dyed her shirt, creating intricate designs that were different from your typical tie-dyed shirt. Eventually, Anderson said she fell in love with tie-dying and invested in expensive, professional dyes. She was even selling them at one point, until life got busy.

“What put it to a halt was school and just trying to stay up until like two or three at night and studying chemistry and biology,” Anderson said.

Originally, Anderson was studying nursing at Parkland College, but when she realized she was prioritizing nursing when what she really enjoyed was art, she decided it was time for a change.

“The change kind of occurred pretty recently with all like the COVID stuff,” Anderson said. “And honestly, it was just like a lot of work for me to do like with my lifestyle and everything.”

By her lifestyle, Anderson means the extra responsibilities she has that many 20-year-old college students might not.

Besides being a full-time Parkland student in her third semester and holding a part-time job at college, Anderson is also the mother of her 2-year-old daughter Raelynn. She goes to day care at the Parkland Child Development Center when Anderson is at school or working.

“I feel like I’m not managing it because I’m not doing the art I want to do because I’m putting it on hold because I was in school full time for a two whole years,” Anderson said. “And now it’s just a bunch of burnout.”

As a way to balance the stress of Anderson’s life she’s also taken up ceramics, which she said she originally started as an elective for the nursing program and stuck with because she loved it so much.

“It’s like therapy, and it’s a way to get out your aggression,” Anderson said with a laugh.

She also said ceramics allows her to participate in something hands on where she’s also able to create something that she can use and be proud of.

“When you finally see the final product and the glaze on it, it’s just like, it’s official,” Anderson said. “It just feels so good, like, it’s very humbling to be like, ‘Oh, yeah, I made this’ or ‘I made all of these plates that we’re eating dinner off of.’”

Anderson clarified that she’s only made one plate, but she hopes to keep working on her skills and eventually make more and even sell her pieces on Etsy.

She said she also hopes to get back into tie-dying next year and open up a shop, which she said she already has a space, certificate and business account for.

But until then, Anderson is focusing on school and taking care of Raelynn, as well as herself, which Anderson said she sometimes forgets needs to be a priority too, even if it means cutting back some time on work some days.

“I’m just gonna drop her off at day care,” Anderson said. “ I might skip ceramics lab today and just go home and do laundry. Some days it’s just like I gotta take care of me.”