A call to laughter: life of a student comedian 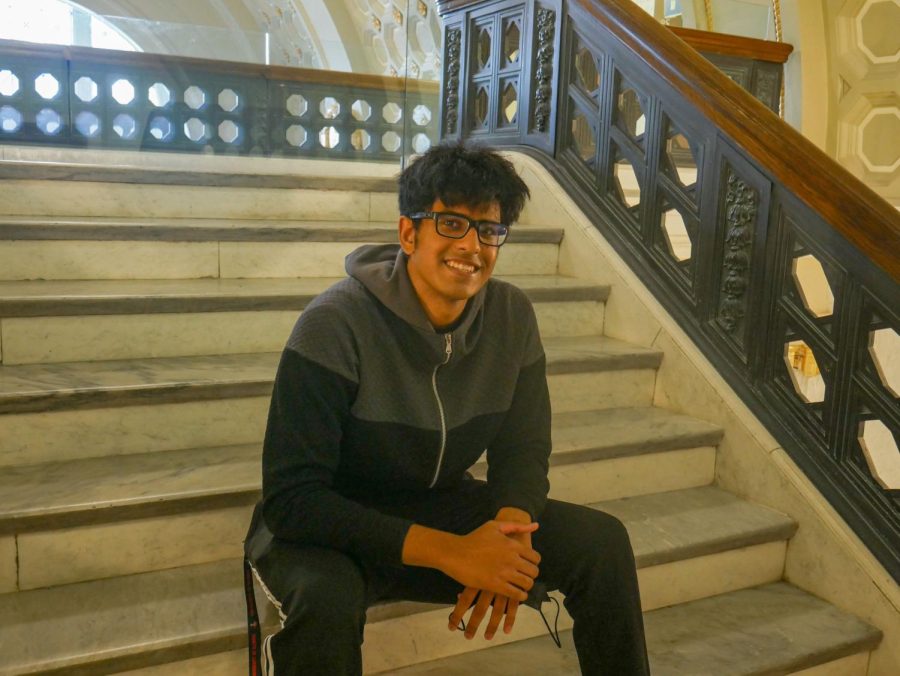 The demands of college sometimes call for hobbies that let students escape the stressful world of studying, exams and nonstop classes. For some students this may be through sports or music. But for Vignesh Suresh, comedy is his calling.

Suresh is a student at the University of Illinois, majoring in math and computer science. He performs Wednesdays and Thursdays for C-U Comedy, a local comedy group that hosts frequent open mic nights in the community

Suresh said when he was young, he’d been a comedy fan himself before ever wanting to walk onto the stage.

“I was a fan first and then I wanted to give it a shot,” Suresh said. “So I went to an open mic and I talked about something – I can’t remember. It did OK, so I was like ‘Alright, I’ll stay with this.’”

As a student originally from San Francisco, Suresh did some of his first comedy scenes in the city right before COVID-19 struck. In a city like San Francisco, comedy is tougher and it’s even harder to find crowds to resonate with, Suresh said. As a comedian for C-U comedy in the present, Suresh said he’s learned to love the crowds at the University of Illinois.

While performing Suresh said he has found himself surrounded by genuine audiences that come in and truly care about comedy. Although the comedic scene here at the University is smaller, Suresh said it’s a place where one can find themselves face-to-face with a realistic scene.

“It’s just a great group of people here which is pretty nice and you see all the same people every week and you get to know them,” Suresh said. “So that’s a lot of fun.”

Like most college students, it can become increasingly difficult to juggle school work, extracurricular activities and hobbies. Suresh performs a few nights during the week for C-U Comedy while simultaneously balancing work for his major.

“I find it easier to balance if you just don’t go to class,” Suresh said. “No I’m kidding! I mean everyone has hobbies and things they do, right?”

Suresh explained that being a student comedian at the University of Illinois is like being involved with any other activity the University offers. Most people learn to balance their work alongside their hobbies very similar to his own life, he said. As a comedian involved in academic responsibilities, Suresh said he finds having a schedule for his comedy skits very helpful, especially when combining comedy and academics.

“I try to spend maybe two hours a day just coming up with jokes and stuff like that,” Suresh said. “And then, you know, a few nights a week, I do shows, but it’s just a normal college student’s life.”

As a comedian in both the larger C-U community and the smaller  community, Suresh said comedy represents a lot for many people. As something that may mean many different things, for some, comedy is universal communication and entertainment. For comedians, this can mean a specific and personalized way of viewing their profession and what they personally get from their field of performance. For Suresh, it’s purely comedic interest.

“I think a lot of people talk about the importance of us socially and about telling your stories and all that,” Suresh said. “For me, I think there’s so many different types of comedians and so many forms of comedy; one thing that they have to have in common is that they’re funny. So that’s always what I try to focus on.”

With Suresh’s comedic interest and participation in the C-U scene, he said that comedy is a definite goal for him in the future, as it is also something he has enjoyed more than anything else he has done.

As Suresh finishes his last semester at the University of Illinois, he said he plans to begin the process of getting into the professional world of comedy. Once he has graduated from the University, he said he’ll secure a job in relation to his major and then focus on building up his comedic talent up to the point of a career.

In addressing the audience of young and aspiring comedians here at the University of Illinois and elsewhere, Suresh advised, “The only advice I could give is just try to write as much as you can, and just try to get on stage at any opportunity. And that’s it, that’s the only way you can really get better.”

“It’s a lot of fun,” Suresh said. “I think anyone out there that’s reading this, if this is something that interests you at all, just give it a try!”