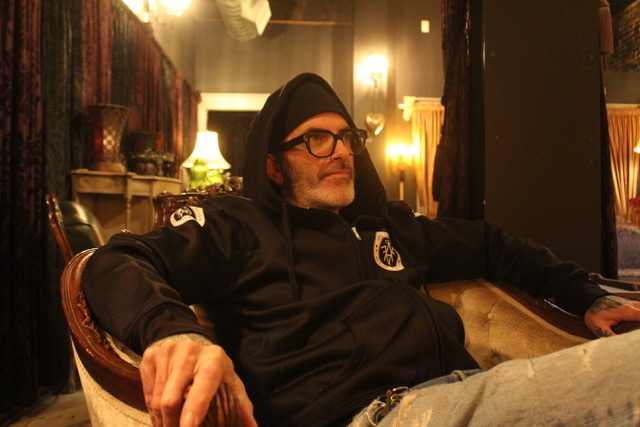 ​​Sebastian Klein, the founder of the Angel Forever Foundation, sits inside the non-profit’s headquarters — also known as the Foundation Room. Klein lost his daughter to suicide in 2017 and started the foundation to provide suicide prevention training and resources to parents and teenagers in Champaign-Urbana.

His hands are covered in dark tattoos while he reclines in a velvet armchair in a room coated in black paint. The walls of the room are adorned with quotes from movies like “Alice and Wonderland” and “Harry Potter” — some of his daughter’s favorites.

Klein is also a dad who lost his daughter to suicide. Her name was Angel and she was just 13 years old when she died.

However, suicide and depression isn’t anything new to Klein.

“I’m a suicide attempt survivor,” he said. “And to lose my own child to something that I’ve suffered with my whole life was beyond profound.”

Klein said he struggled to come to terms with Angel’s death. He said he felt guilty — like he missed the signs that she was struggling and could have done something to stop her. But he said he didn’t want Angel’s death to become another statistic.

So, he founded the Angel Forever Foundation.

The Angel Forever Foundation is a non-profit organization in C-U Klein founded in 2017 after she died.

His mission: to tell Angel’s story to help in advocating mental health awareness & suicide prevention with a focus on parents and teenagers.

“I’m focused on teenagers and parents of teenagers because I can’t save the world,” Klein said. “I had to really hone in and just get people to realize how important it is to not overlook the things that get overlooked every single day.”

But when she first died, Klein struggled to come to terms with what had happened. He ordered dozens of books about suicide on Amazon and learned as much as he could.

Angel was a writer, a straight A student and loved to write and sing. But although he saw her everyday, she was silent about the pain she was going through.

Klein said Angel was being bullied at school and on social media.

“It’s like she was grieving at the top of her lungs and asking for help but no words were coming out of her mouth.”

In C-U, Klein said he wants local schools to embrace suicide prevention and having conversations about suicide.

Instead of having a guest speaker in a suit and tie come in once a school year during National Suicide Prevention Month, Klein said having someone come in that has personal experience with suicide would help start a conversation.

“If you allow someone like me to come in and speak to a whole group of students on personal experience and tell Angel’s story, they can actually identify with it,” Klein said. “That’s what gets people to express how it is that they’re feeling.”

Now, Klein holds trainings and workshops to train people on how to spot the warning signs of suicide and talk about mental health with people in their own lives.

But to him, there is still a huge stigma around speaking out about suicide and mental health in C-U. Klein said he’ll hold events where only a couple of people will show up.

“Just within this community alone, let alone the whole country or the whole world, it’s like pulling teeth trying to get anything done,” Klein said.

Although the Angel Forever Foundation’s dark theme may not attract as many people in the local community, Klein said the theme is mainly influenced by the movies and colors Angel liked.

“The irony of it is, the people who are attracted to this darker theme, are the ones who are most silent,” Klein said.

Although he said he blamed himself for a long time, the foundation’s efforts have become a way to continue to tell Angel’s story. Instead of just being a statistic, Angel’s death has the opportunity to make a difference in the lives of others in C-U.

Now, Klein said he’s committed to helping local parents of teenagers not miss the signs that he did with Angel.