The restaurant overseer and bread giver 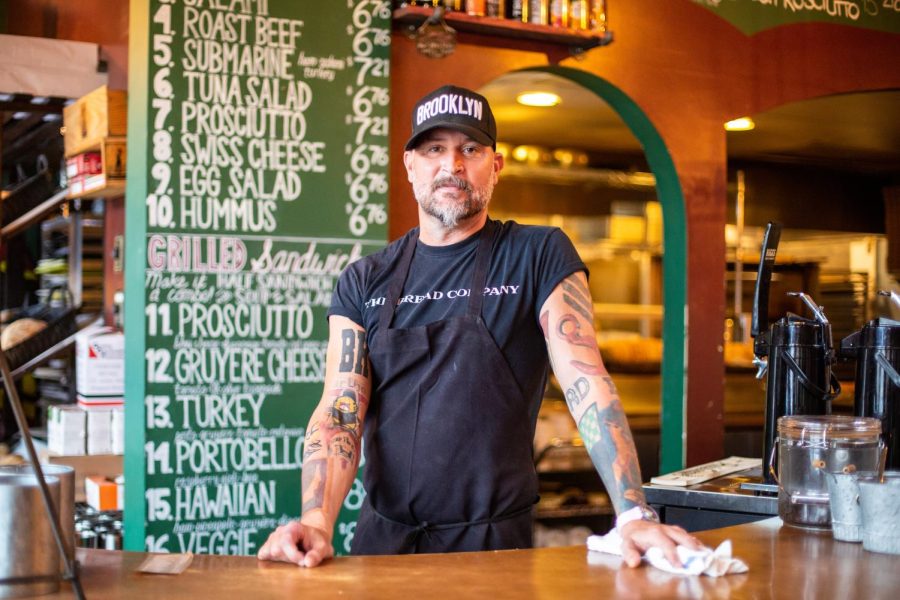 Derrick Aikman, owner of The Bread Company, doesn’t mind if he’s recognized for his position and just wants to make sure his business runs smoothly in the nurturing working environment he created.

When glancing into the open kitchen of Urbana’s The Bread Company, you may catch a glimpse of Derrick Aikman, black headphones resting on his head, eyed focused on the sizzling of the sandwiches in the pans in front of him and the little white order tickets that are added to the line every few minutes.

You might assume he’s the cook, but you may never guess he’s the owner.

Aikman said when he was growing up he would help wait tables with his siblings for his parents.

His mom and founder of The Bread Company, Ruth, moved to Urbana from Switzerland when she was in her twenties. Aikman said she missed the rustic taste of bread from her home country and made loaves for her family and friends. Due to popular demand, Ruth opened the small restaurant in ’83.

When Aikman lived in New York City, where he started a family and worked as a diver for 10 years, his father called to let him know his parents were retiring from the business. Aikman decided to step in and run it himself, along with the help of his wife Lindsay.

Aikman said people said he “naturally fit” into the business and he credits his mom.

“Since I had kind of watched how my mom did things, I have very much of her personality,” Aikman said.

Aikman said much of his philosophy surrounding the business is intuitive. For example, he painted murals on the walls of the restaurant without training.

The pandemic brought a turning point for his relationship with the restaurant. He said it allowed him to transition from being the overseer of his parents’ restaurant to being the change maker of his own restaurant.

“The pandemic allowed it to at least become, instead of me taking over and just being a kind of caregiver to the restaurant that just keeps going, it allowed me to really change things to make sure it survived,” Aikman said.

Aikman said he also recognizes his staff’s role in the restaurant’s success. He said he has pride in the nurturing and friendly working environment.

“We have relatively low turnover for restaurants,” Aikman said. “People, once they start working here, they love it. And again, that’s part of that big, long family history of it.”

He said staff members have been known to stay on the team for as long as 20 years, and many have met life-long friends and significant others within the restaurants walls.

Aikman said The Bread Company has several regulars, who are often greeted with a smile and an inquiry as to whether they would like “their usual” at the order window.

“We gained a lot of that trust by just being solid, unpretentious, just hard working,” Aikman said. “People see that this place has real depth to it. We do make mistakes, we aren’t perfect. And it’s always been that way.”